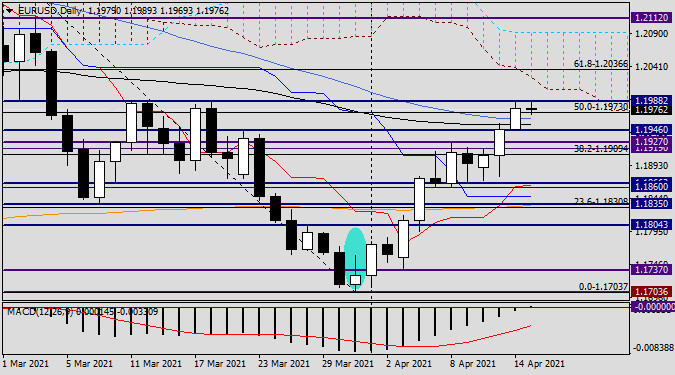 It is always pleasant when the recommendations and forecasts turn out to be correct. As an example, let’s talk about yesterday’s review for the EUR/USD pair. It was highly expected to continue the upward movement after sellers’ resistance at 1.1927. The next target was the higher resistance level of 1.1988, from which a slight downward rebound since it is quite strong. This is exactly what happened. In this case, the current trading in the EUR/USD pair is in line with expectations. To finish off the introduction, it worth noting that completely error-free forecasts and trading recommendations do not exist in principle. The market constantly surprises, breaking either the technique or the foundation.

In terms of the fundamental part, we assumed that yesterday’s main events were supposed to be the speeches of the Fed Chairman and the ECB. However, these monetary officials speak out so often that there is no reason to expect anything fundamentally new from their next comments. But apparently, Jerome Powell told the market participants some interesting and quite important details during his speech on Wednesday. First of all, this concerns the fact that the Fed will reduce the volume of bond purchases much earlier than it will start the process of raising interest rates. Describing the US economy, the Fed’s head said that it has reached an important turning point on the way to its pre-pandemic recovery and further development. And while returning to the question of the timing of rate hikes, he said that they will depend on economic indicators, and the chances of tightening monetary policy this year is virtually zero.

Naturally, Powell considered the COVID-19 pandemic and the inability of the authorities to curb the increase in the number of infections by mass vaccination of the population as the main threat to the economy and the country as a whole. Meanwhile, the speech of ECB President Christine Lagarde somehow remained in the background and this is not for the first time. In my opinion, Christine Lagarde is noticeably inferior in this aspect compared to Mario Draghi and his influence on the markets. The Italian’s comments and speeches caused much more volatility in the markets than the speeches of the current president of the European Central Bank. Looking at today’s economic calendar, it is necessary to note several American macroeconomic data, which will begin to flow from 12:30 Universal time. It can be assumed that investors will focus on reports on retail sales and industrial production. As usual, the initial applications for unemployment benefits will also be paid attention to either. Now, let’s analyze the daily time frame.

It can be seen that yesterday’s trading ended above the blue 50 simple and black 89 exponential moving averages. In fact, this factor can add to the euro bulls. However, the main task of the traders to raise the exchange rate has yet to be solved. In particular, sellers have not yet broken through the resistance level of 1.1988, and test the most important psychological level of 1.2000. It can be said that a consolidation above this level will only open the way to higher prices. If the pair declines at the end of today’s trading and ends the session below the level of 1.1945, which is very possible, then the EUR/USD pair growth can be considered done, so we should get ready for sales.

Given the massive US macroeconomic statistics, there will be enough impulse today, and in principle, any trading outcome is possible. Nevertheless, today’s main trading recommendation will be purchases after short-term declines to the range of 1.1960-1.1950. It will be possible to sell if reversal patterns of candlestick analysis appear below the resistance level of 1.1988 in this or earlier time frames.

Can Prince Harry still be king and is he still a...

Trading recommendations for starters of EUR/USD, GBP/USD and DXY on March...