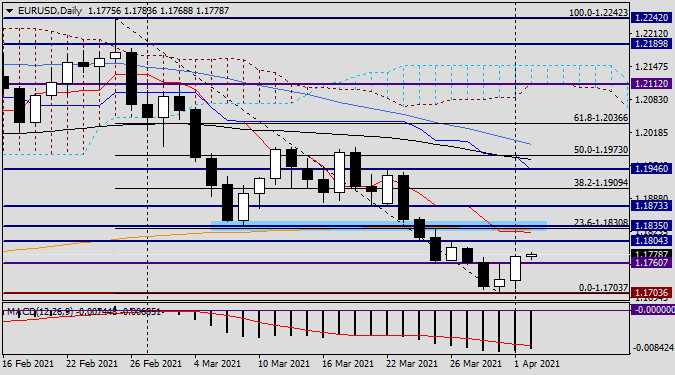 Analysis and forecast for EUR/USD on April 2, 2021

As usual, on the first Friday of each new month, the most important data on the labor market comes from the United States of America. Once again, I would like to note that these reports stand apart in their significance and influence on price dynamics, that is, they are the strongest in contrast to all other macroeconomic data. They can only compete with an extended meeting of the US Federal Reserve System (FRS) and a decision on the rates of the European Central Bank(ECB), and if they carry drastic changes in monetary policy, especially regarding the main interest rates. In the old days, after the release of Nonfarm, there was such high volatility. Often, after the publication of data on the US labor market, trends for currency pairs changed. However, it is worth noting that in recent years this has been happening less and less often. Nevertheless, the importance of Nonfarm Payrolls has not been canceled. In particular, today we will once again see the pace of recovery of the American economy from the consequences of the COVID-19 pandemic. At the same time, it is characteristic that the day before, US President Joe Biden said that due to the adoption of an unprecedented infrastructure program of two trillion dollars, millions of new jobs will be created in the country, and the US economy will noticeably revive and accelerate.

Against the background of the elimination of the consequences of the coronavirus epidemic and the trade war with China, which has also not been canceled, this is a truly huge step forward in terms of the future economic prospects of the world’s leading economy. However, let’s go back to today’s labor reports from the United States and remember what forecasts economists give for the three main indicators. The unemployment rate is expected to fall by 6%, while a month earlier it was at 6.2%. A very bold forecast, which has yet to be justified. It is predicted that in March, 647 thousand new jobs appeared in the world’s leading economy, which is also quite an ambitious expectation, especially since the previous figure for Nonfarm Payrolls was 379 thousand new vacancies in the non-agricultural sectors of the American economy. But expectations for the growth of average hourly wages, on the contrary, are very modest and provide for an increase of only 0.1%. These are the layouts before the publication of the most important macroeconomic data of this week. Let’s not guess what the actual figures will turn out to be, since it makes no sense, and even more so that market participant may react to them in different ways. It is better to take a look at the daily EUR/USD price chart and note if there have been any changes.

So, according to the results of yesterday’s trading, the main currency pair of the Forex market showed growth, which at this stage of time seems to be corrective. This can be judged by the grid of the Fibonacci instrument stretched for a decrease of 1.2242-1.1703. Once again, I will share my long-term observations. As a rule, with such a strong trend (in this case, a downward trend), the correction is limited to the first pullback level of 23.6 fibo. Please note that the broken support level of 1.1835 is located near it, the orange 200 exponential moving average is just below it, as well as the red Tenkan line of the Ichimoku indicator. In the author’s personal opinion, the price zone of 1.1800-1.1840 is an excellent opportunity to open short positions. However, if today’s trading ends above 1.1840, the correction can be continued in the price zone of 1.1870-1.1910. We will discuss the situation for EUR/USD in more detail on Monday, taking into account the published US labor statistics and the results of the closing of the trading week.

GBP/USD: plan for the European session on December 8. COT reports....

California Lawmakers to Newsom: Give All Immigrants Health Coverage

Benefits of Working from Home as a Tax Preparer

Stop Work-Induced Stress and Anxiety From Running Your Life With This...

Experts believe that the global introduction of bitcoin is the main...

HS Basketball Coach Killed in Shootout After Attempting to Rob a...

EURUSD breaks support and reaches our short-term pull back target.