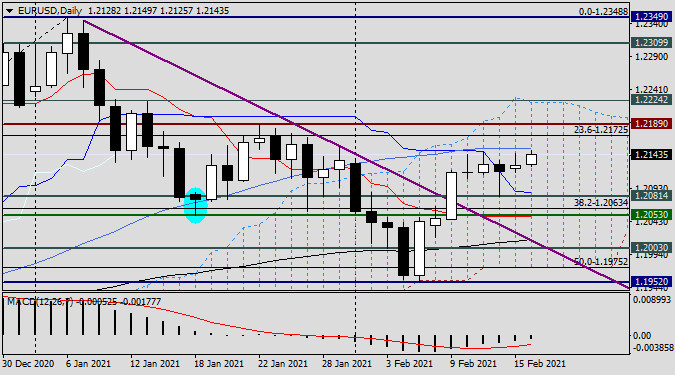 Analysis and forecast for EUR/USD on February 16, 2021

At yesterday’s trading, there was a demand for risky assets. Although it was not so pronounced, the US dollar was not attractive as a safe-haven currency. Market participants are optimistic about the large-scale vaccination against the COVID-19 pandemic, and also hope that the $ 1.9 trillion stimulus package adopted in the United States to restore and support the world’s leading economy will become an effective tool and give the desired result.

Meanwhile, the coronavirus infection, which truly has no borders, has manifested itself in a new form. And again in the UK, where there is a new strain of COVID-19, which is called B1525. We knew earlier that the virus has no borders, and we were convinced of this once again using the example of a new strain of an insidious epidemic. In addition to the UK, a new strain of coronavirus B1525 has been detected in France, Denmark, the United States, Australia, Canada, Jordan, and Nigeria. Just think about the extent of the global reach. The new strain has a wide range of mutations, so there is almost no doubt that it should be continued, and this strain is far from the last. Unfortunately.

If we turn to the events that are scheduled for today in the economic calendar, it should be noted that on February 16, macroeconomic statistics from Europe will prevail. So, at 11:00 London, a whole block of macroeconomic statistics will arrive, namely, the revised data on GDP in the eurozone for the fourth quarter of last year, the change in the number of employees in the euro area, as well as the index of business sentiment from the ZEW institute for the eurozone and Germany. From the US, we can only distinguish the index of activity in the manufacturing sector from the Federal Reserve Bank of New York, the publication of which is scheduled for 14:30 (London time).

Turning to the analysis of the price charts of the main currency pair of the Forex market, it is worth noting that there were virtually no changes on the daily chart. Following the results of yesterday’s trading, a small doji candle appeared on this timeframe, with the upper shadow slightly longer than the lower one. As you can see, the attempts of the euro bulls to raise the rate up are limited by the blue Kijun line of the Ichimoku indicator. So at the moment of writing, the players to increase the rate are storming this obstacle. If today’s trading closes above Kijun, the next targets at the top will be the brown resistance level of 1.2189, and then the important mark of 1.2200 and the upper limit of the daily cloud, which passes in the area of 1.2220. For the bearish sentiment to prevail in the pair, it is necessary to break the support level of 1.2081, slightly above which, at 1.2087, the Kijun line passes. 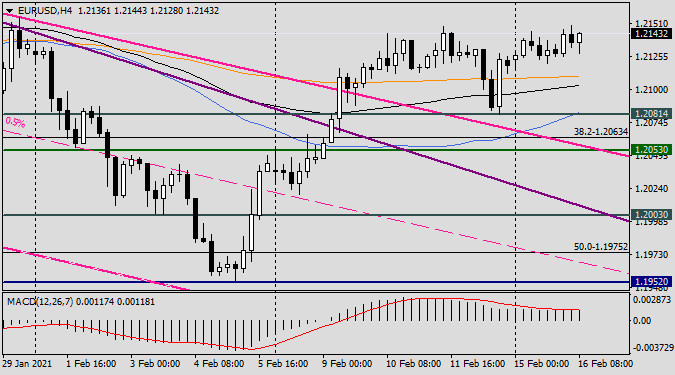 On the four-hour chart, consolidation is observed, after which, as a rule, there is a directed impulse in one of the sides. Since the euro/dollar is trading above the used moving averages (200 EMA, 89 EMA, and 50 MA), it is more likely that the pair will head north. On the other hand, the return of the quote under the indicated moving averages with consolidation under them will give a signal of a high probability of a downward scenario. If we identify trading recommendations for today, then we should consider buying after a decline in the price zone of 1.2110-1.2080, where the designated moving averages are located. There is a high probability that these indicators will provide the pair with strong enough support and turn the course up. An alternative scenario is that the price will go under the support level of 1.2080 and consolidate below, after which, on a pullback to the price zone of 1.2080-1.2100, it is already worth preparing for sales of the EUR/USD pair.

Trading plan for the EUR/USD pair on November 23. Improving outlook...

How to behave if the cryptocurrency collapses?

Miami Dolphins Will Stay Inside Locker Room During National Anthem

Amazon Links Up with Pharrell Williams and Georgia Tech to Launch...

Meet the New Jersey Woman Who Owns Over $200 Million in...

Why and how long will Bitcoin be stuck?

Forecast and trading signals for Ethereum on February 12