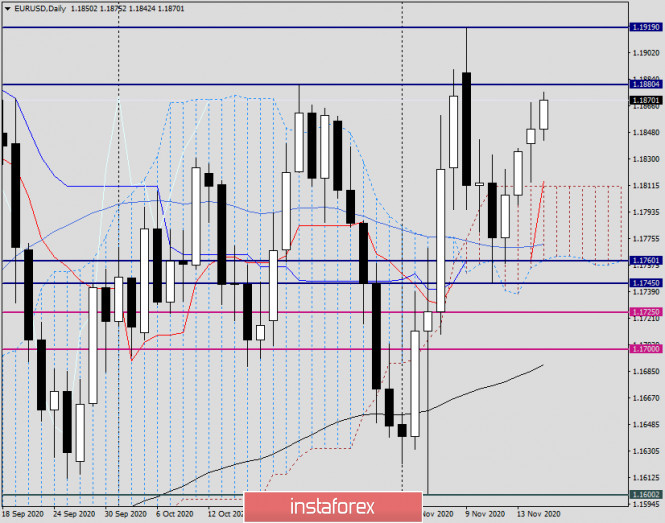 Yesterday’s trading on the main currency pair was dominated by conflicting moods, which affected the price dynamics of the instrument. One of the main topics for investors is the creation of a vaccine against COVID-19. Joe Biden’s victory in the US presidential election and the “dovish” monetary policy of the Federal Reserve System (FRS) are likely to contribute to the weakening of the US currency against its main competitors. In turn, Donald Trump’s failure to recognize the election results delays the creation of a vaccine and the recovery of the world’s largest economy from the effects of coronavirus, and this is already contributing to increased demand for the US dollar as a safe asset.

Let me remind you once again that the United States has suffered the most from the COVID-19 pandemic. According to the latest data, the number of infected people in the United States is inexorably moving towards 12 million people, with about 253,000 deaths recorded. Against this background, restrictions are being stepped up in the United States when stores are closed, and people are being urged to stay home and minimize their contacts.

If you look at today’s economic calendar, you should pay attention to reports from the US on retail sales and industrial production. Also scheduled to speak are members of the Federal Open Market Committee Bostic, Daley, and Williams. ECB President Christine Lagarde is expected to make another speech today. You can find forecasts and times for upcoming events in the calendar itself.

As already noted at the beginning of the article, yesterday’s trading on EUR/USD was multidirectional. The initial growth of the pair was replaced by its decline to the broken upper border of the Ichimoku indicator cloud, after which the course again turned in a northerly direction.

To implement a downward scenario, the EUR/USD bears need to return the price to the limits of the Ichimoku indicator cloud and lower the quote below the important level of 1.1800. However, it will be quite difficult to do this. As you can see, right above the broken upper border is the red Tenkan line, which can provide the price with additional and quite strong support. 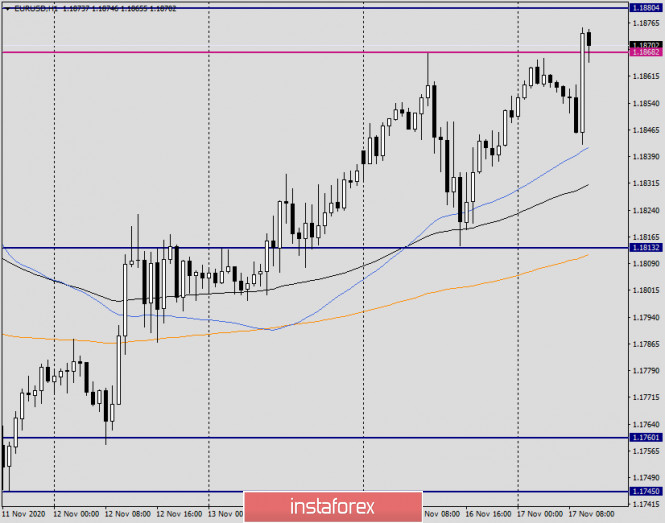 Yesterday’s trading recommendations to consider opening long positions after declines in the price zone of 1.1830-1.1800 were confirmed. Today, during the Asian session, the pair already gave a pullback to 1.1845, after which the rate began to strengthen. Although the euro/dollar trades are held in a relatively narrow trading range, it is visible that the pair is moving up and is preparing to test the upper limit of the hourly range of 1.1868 for a breakdown. For today, I offer two options for buying EUR/USD. The first one is at the breakdown of 1.1868, where yesterday’s highs were shown. The second one, after the actual breakdown, is on a pullback to the price zone of 1.1880-1.1860. If there is no breakdown and bearish candlestick signals appear here, this will be the basis for opening short positions. It is better to set goals for purchases in the area of 1.1900-1.1920, and sales in the area of 1.1840-1.1810.

The NSA warns enterprises to beware of third-party DNS resolvers

Technical Analysis of EUR/USD for November 20, 2020

Effectively Managing Your Business Life During The COVID-19 Era

President Trump Said He Is the ‘Least Racist Person’ in the...

Jared Mauch didn’t have good broadband—so he built his own fiber...

Bucket List: Top 15 Best Things to Do in Basel, Switzerland

Good Financial Reads: Is Life Insurance Worth It?

Logitech raises its sales forecasts 60% and soars in the stock...

EURUSD and GBPUSD: The pound rose amid rumors of a new...

Analysis of EUR/USD on January 18. The priority is still wave...

Trading recommendations for the GBP/USD pair on October 28