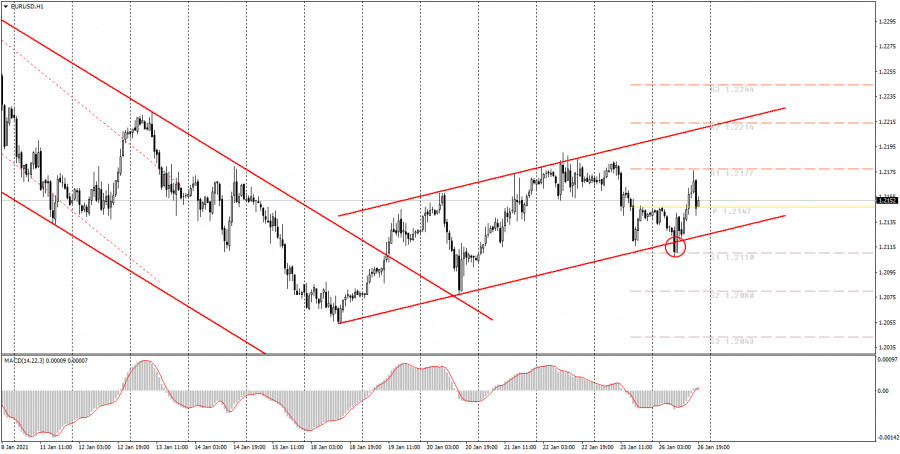 Analysis and trading signals for beginners. How to trade EUR/USD on January 27. Analysis of Tuesday trades. Getting ready

During the session on Tuesday, the EUR/USD pair moved sharply to the downside. As a result, the pair tested the lower boundary of the ascending channel. It was quite a difficult moment for novice traders. At one point, the quotes consolidated below the ascending channel, which we recommended using as a sell signal. We assumed that in this case the price would drop to the support level of 1.2080. However, the price had almost immediately resumed the uptrend and bounced off the lower boundary of the channel and the support level of 1.2110. So, this signal turned out to be false. In some cases, it was possible to avoid losses, but this involved more complex trading techniques. As soon as it became clear that the signal was false and the upward trend persisted, novice traders had the opportunity to open buy positions. As a result, the price advanced to the first resistance level of 1.2177 during the day, with only one pip left to reach it. Long positions could be closed near this level. So, beginners could have lost about 30 pips following a false sell signal. At the same time, they could have gained about 35 pips with a buy signal. Thus, traders could have even closed the session with minor gains, although it was not the most favorable day for trading. By the way, the buy signal is still in place. So, risk-takers can keep their long positions open. The key thing here is that the upward trend has not been cancelled, which means we can start tracking new buy signals now.

On Tuesday, January 26, the release of the US Consumer Confidence Index was the only important macroeconomic event of the day. The confidence of American households increased to 89.3 in January from 87.1 in December. However, markets did not react to this report. No other important events happened during the day.

Tomorrow, the results of the Fed’s meeting (the Federal Reserve System – the central bank of the US) will be published in the US. No changes are expected to its monetary policy, but the Fed may announce the revised forecast for GDP, unemployment, and inflation. It may also reveal adjustments to the quantitative easing program. Jerome Powell, the head of the Federal Reserve, will give a speech at a press conference. These events will take place tomorrow evening. So, you will have enough time to exit the market before that.

1) Long positions remain relevant at the moment as the price is still holding within the ascending channel. However, we recommend that novice traders wait for a new buy signal generated by the MACD indicator or for a rebound from the lower boundary of the channel. When the buy signal is formed, you can trade long with the targets set at the resistance levels of 1.2177 and 1.2200.

2) Trading short is not the best option at the moment. To open sell positions, you need to wait until the price consolidates below the ascending channel. Even if it manages to do so on January 27, the downward movement is unlikely to be strong. Thus, novice traders will be able to get a profit of 20-30 pips following a sell signal unless markets reaction to the Fed’s meeting is too strong.

Red lines are the channels or trendlines that display the current trend and show in which direction it is better to trade now.

Overview of the EUR/USD pair. September 17. Donald Trump is going...

Technical Analysis of BTC/USD for February 17, 2021

Overview of the EUR/USD pair. September 22. Christine Lagarde is worried...

Verizon agrees to sell Yahoo and AOL to private-equity firm for...

Technical analysis of Ethereum for May 4, 2021