Analysis of EUR/USD on November 25. The US dollar is teetering on the verge of a new fall, this time to the 20th figure 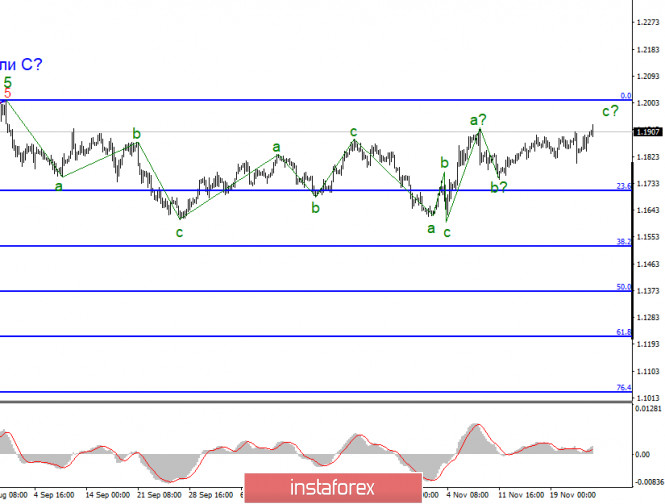 The wave marking on a smaller scale also indicates that the next three-wave section of the trend is still being built. It is also possible that the upward section of the trend within the global wave 5 has resumed, as I mentioned when analyzing the 24-hour timeframe. In any case, the current wave should lead to an increase in quotes above the peak of the previous wave a, which is above figure 19. A successful attempt to break through the minimum of wave b will require making adjustments and additions to the current wave markup.

It can be said this time that the wave marking is much more important than the news background. It is still too soon for me to come to the conclusion that the Euro currency has sufficient grounds to continue to be in demand. In recent months, it would seem that there has been a lot of important information from America and the European Union. But after all this time, there was no trend in the instrument. The instrument moved with three wave structures and continues to do so currently. What’s important in America right now? Joe Biden won the election, Donald Trump conceded defeat and gave the order to start the process of transferring power to the Democrat. In no state has the current President of the United States been able to review the voting results. Former Fed Chair Janet Yellen might be appointed to the post of Finance Minister, at least Joe Biden offered her the post. But all this news doesn’t really matter for the dollar right now. Well, Yellen is likely to be appointed, but so what? In any case, the markets will react to its actions, to the actions of the Ministry of Finance and so on, and not to the fact of the appointment of a particular person to a particular post.

Currently, the situation in the European Union is not very interesting. It was reported a week ago that the seven-year budget and the recovery fund after the pandemic were blocked by Poland and Hungary. However, these countries vetoed these funds more than a day before they were supposed to be implemented. To put it simply, the EU authorities have plenty of time to reach an agreement with the authorities of Poland and Hungary.

At the same time, the heads of the Central Banks of the United States and the European Union said that in the near future, we should not expect a sharp economic recovery due to the mere fact of creating a vaccine against coronavirus. Christine Lagarde is completely pessimistic and expects a serious contraction of the economy at the end of 2020 due to the repeated “lockdown.” Thus, I can’t call which positions are more attractive, the dollar or the euro.

The euro-dollar pair presumably continues to build a three-wave upward trend section. Therefore, I recommend buying the instrument with targets located near the 1.2010 mark, which corresponds to 0.0% Fibonacci, for each MACD signal “up,” based on the construction of wave C. The assumed wave b has presumably completed its construction.

What are the results of the EU’s virtual summit?

Meet the All-Black Female Fishing Team From North Carolina Who Are...