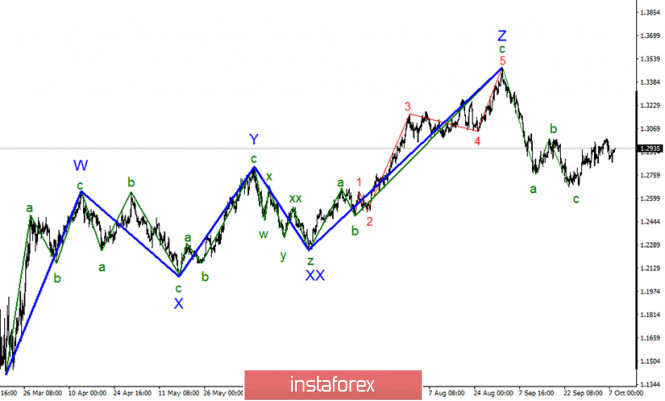 In the most global terms, the construction of a new downward trend section is expected to continue. However, the departure of quotes from the lows reached over the past few days suggests that the entire section of the trend that started on September 1 has taken a three-wave form and is another corrective wave as part of the upward section of the trend which began on March 19. At least it looks convincing enough. If this is true, then the current positions may continue to increase quotes within the new upward wave. However, the smaller scale allows for other scenarios. 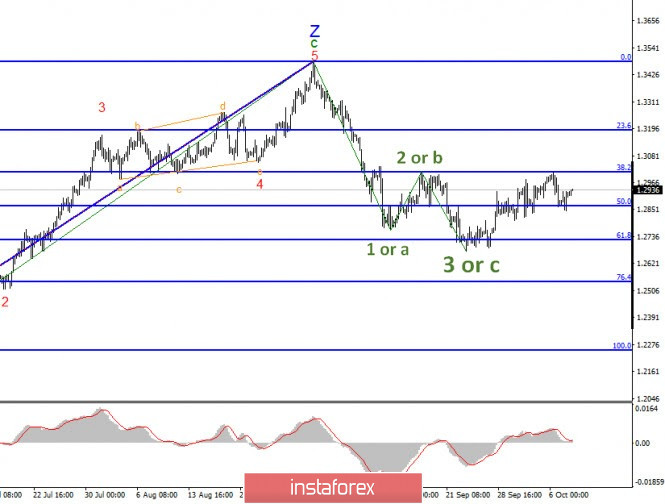 On a closer inspection, it is clear that the wave marking really took a three-wave form and simultaneously looks quite convincing. The failed attempt to break the 61.8% Fibonacci level only further gives an assurance that the descending set of waves is complete. But at the same time, an unsuccessful attempt to break through the 38.2% Fibonacci level suggests the idea of building a new downward wave. Therefore, there is also a variant in which the downward section of the trend from September 1 will continue its construction, and the last three waves will be part of wave 2 or b of this section. In this case, the decrease in the instrument’s quotes will resume from the current positions.

Sometimes, when reading the American news, it is quite hard to believe that all this is really happening. But there are no other ways to explain the fact that, yesterday, Trump suspended negotiations with the Democrats on the provision of a new package of assistance to the US economy, as he failed to agree on the amount, and today said that he is ready to sign separate bills that will be aimed at supporting individual industries and groups of citizens. Trump and his representatives now simply offer not one comprehensive package of assistance, but several separate agreements, each of which implies the allocation of funds for individual needs. For example, Donald Trump believes that airlines, small businesses, and ordinary US citizens deserve help. “If a separate bill on benefits is sent to me, our excellent citizens will receive them immediately. I’m ready to sign it right now,” Trump said. One of the democratic leaders, speaker Nancy Pelosi, criticized the US President, saying that “he does not want to defeat the coronavirus and shows his contempt for science and health workers, as well as all those who have suffered from the epidemic. He refuses to allocate aid unless his name is printed on the check,” Pelosi said. All this is very similar to the election campaign in the conditions of a severe economic crisis. Trump wants every citizen to get a check with their name on it and get additional votes in the election, while Democrats want to pass their $ 2.2 trillion bill that will help the American economy and boost Joe Biden’s ratings. However, the latter is already far ahead, according to the latest opinion polls.

The pound-dollar instrument has presumably completed the construction of a downward trend section. However, it is recommended not to rush with new purchases of the British until a successful attempt to break through the 38.2% Fibonacci level. Demand for the British can fall at any moment. Since a break of the 30 figure will indicate the readiness of the markets for new purchases of the pound and further increase in quotes, it is advisable to buy a tool with targets located near 1.3191 and 1.3480, which corresponds to 23.6% and 0.0% Fibonacci, for each new MACD signal up.

21-Year-Old Sha’Carri Richardson Makes Waves With Her 10.72 Speed in Latest...

What can trigger the market?

GBP/USD: plan for the American session on November 17 (analysis of...

Technical recommendations for EUR/USD and GBP/USD on December 2

Jill Scott Partners With Nationwide Insurance For Latest ‘On Your Side’...

GBP/USD Hot Forecast for 10, May