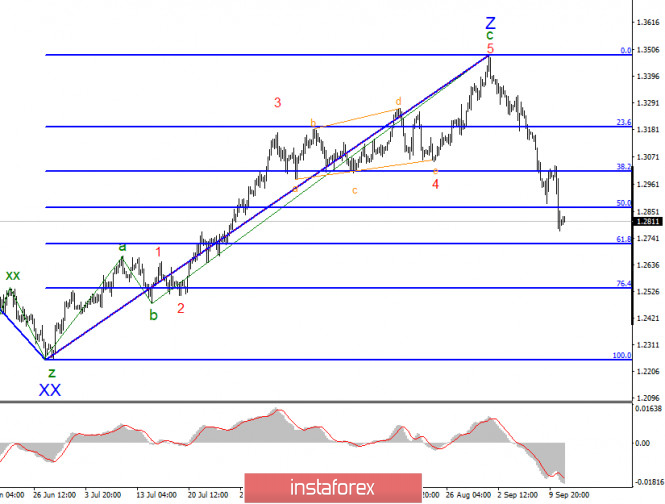 The wave pattern of the upward trend section already completed its formation. Thus, the pair has probably moved on to building a new downward trend section with the first targets located around 25th and 27th figures. However, much of the pound will really depend on the news background. Recently, the dollar has dropped significantly against the pound solely due to the negative news background from the US. Now, the reverse process has begun, as the news coming from the UK at this time is disappointing and leaves the markets no other option but to sell the pound.

Yesterday, the GBP/USD pair lost another 200 basis points and thus, continued to build a downward set of waves that began on September 1. The entire upward trend is completed, so we can presume that the formation of a new downward trend section and its wave 1 or A continues. However, it will entirely depend on the news background how strong and extended this wave will turn out, thanks to which such a strong decline in the pound quotes began.

Meanwhile, the UK’s news background continues to be entirely negative and thus, the daily decline in the pound by 100-200 points since September 1 is not surprising. More so, Boris Johnson’s new bill is supported only by conservatives, and even then not by all. Therefore, the key question now is: how many Conservatives will ultimately vote for this bill? There is no doubt that all opposition forces will reject this document. Johnson has 365 votes at his disposal, 325 votes will be enough to pass this bill. Thus, it takes 41 or more conservatives to refuse to support him.

On another note, the European Commission made an official statement, in which it announced that the agreement with London has already entered into force and cannot be changed unilaterally. “The Brexit Agreement entered into force on February 1, 2020. From now on, neither the EU nor the UK can unilaterally change, clarify, amend, ignore or reject the agreement,” the statement said. Vice-President of the European Commission Maros Shevchovich believes that Great Britain has already undermined trust between the parties and now “London must restore this trust.” However, Boris Johnson said that he did not intend to back down and this bill is necessary for Great Britain to provide all countries of the Kingdom with access to the British market on equal terms. On the other hand, the US inflation report for August is due today. This may generate some interest in the markets, but not strong, since events in the British government are now more important.

It is presumed that the pound/dollar pair has completed the construction of the upward wave Z. Thus, I would now recommend selling the pair with targets near 1.2720 and 1.2542, equating to 61.8% and 76.4% Fibonacci, at every new MACD signal down.

AUD/USD. The Aussie follows the dollar: the target is 0.7000

Hot forecast for EUR/USD on December 10

Recovery of global economy from COVID-19 not to be easy

EUR/USD: plan for the European session on January 18. COT reports...