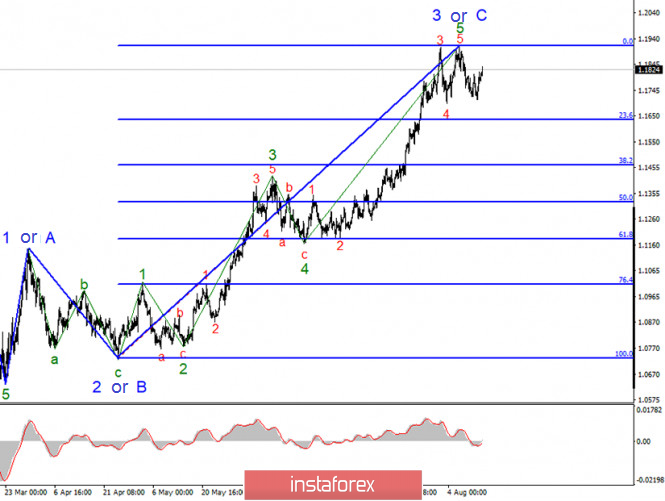 In general sense, the wave counting of the EUR / USD instrument looks complete. However, an upward trend that begins on March 20 can easily transform into a five-wave. At the moment, everything looks as if the upward trend segment is over, and the internal wave structure of each global wave looks quite convincing and does not raise any doubts. A successful attempt to break the 0.0% Fibonacci level by 90% will mean that the upward trend will take on a five-wave form and the euro will continue to rise. 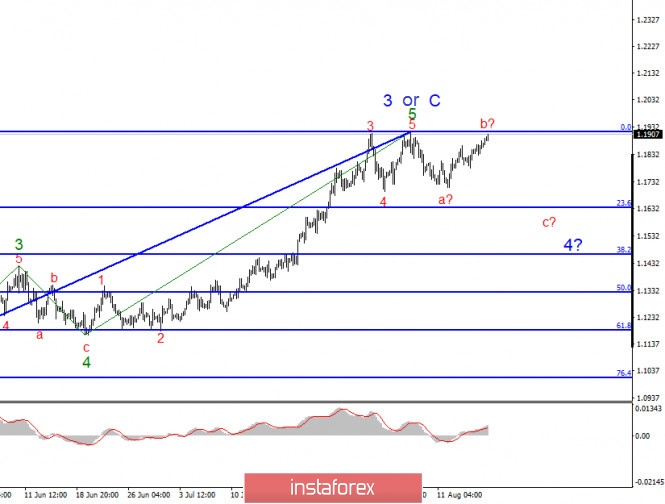 Wave counting smaller scale shows that the pair built two new waves after the completion of the intended wave 3 or C . The second wave, correctional b, has been very extensive and almost went for the maximum wave 3 or C . Sometimes it happens. An unsuccessful attempt to break through the 0.0% Fibonacci mark will indicate the resumption of the decline in quotes and the unpreparedness of the markets for further purchases of the euro. In the near future, the instrument may proceed to building wave c at 4 , if the current wave counting is correct. At the same time, quotes leave above the peak of wave 3 or C by 40-50 points will mean the need to make adjustments and additions to the current wave counting.

On Monday, August 17, there was not a single economic report in America and the European Union. The markets were forced by inertia to push the Euro / Dollar instrument up. On the other hand, the absence of a news background is even good, since the wave counting now suggests a decline in quotes. If the news background appears again, it will most likely be negative for the US dollar, which is holding on with its last bit of strength so as not to start another collapse. Without the news background, the markets may still allow the instrument to build another bearish wave.

Today, European Central Bank Vice-President, Luis de Guindos released a statement and stressed that European banks are unlikely to fully recover before 2022, and the recovery of the EU economy will become the starting point for the solvency of European banks. Thus, without new waves of a pandemic, the European economy can reach pre-crisis levels no earlier than 2022. If there are new waves of the epidemic, then the timing may move even further forward.

Another news is expected from the European Union and the US on Wednesday. The wholesale price index will be released in Germany early in the morning, a meeting of the Council of Finance and Economy Ministers will be held in the European Union, and a little later the consumer price index for July will be released. In the evening, the latest minutes of the US Federal Reserve meeting will be published. This document rarely provokes a reaction, since it usually does not contain anything fundamentally new and still unknown to the markets.

The Euro-Dollar pair has presumably completed the construction of the upward wave C in B. Thus, at this time I do not recommend new purchases of the instrument, and closing the old ones at least until a successful attempt to break through the 0.0% Fibonacci level. I also recommend considering the possibility of selling the instrument with the first targets located near the calculated levels of 1.1634 and 1.1465, which equates to 23.6% and 38.2% Fibonacci, as per the downward signs of the MACD.

Technical Analysis of BTC/USD for November 6, 2020

Technical Analysis of ETH/USD for December 7, 2020

Technical analysis of Ethereum for February 9, 2021

Dive into the Philippines’ breathtaking and award winning waters

911 Dispatcher Arrested for Not Returning $1.2 Million Accidentally Deposited Into...

Ben & Jerry’s is Sick and Tired of White Supremacy, Want...

More Than 100 Large Corporations Discuss Withholding Donations And Investments Due...