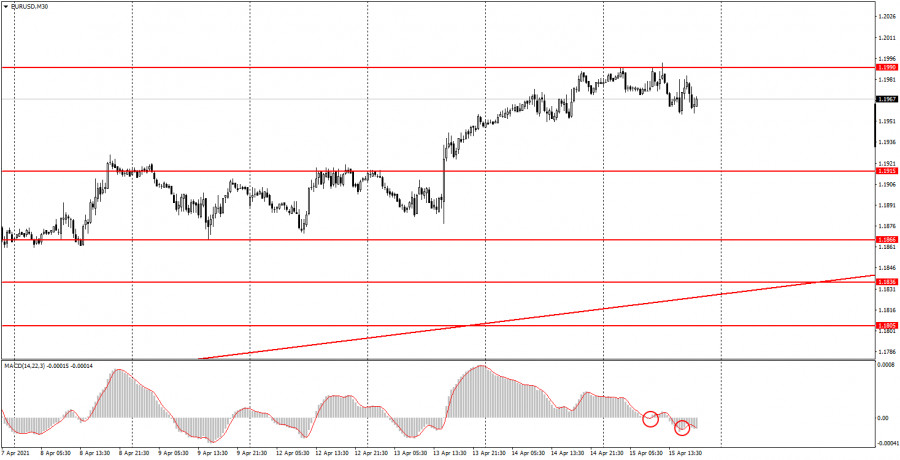 Analytics and trading signals for beginners. How to trade EUR/USD on April 16. Analysis of Thursday trades. Getting ready

The trading activity on the euro/dollar pair was very sluggish on Thursday. Volatility was still very low, so it was extremely difficult to trade. During the day, EUR/USD failed to overcome the level of 1.1990, although it had bounced from it three times in total. We will talk about these signals below when discussing the 5-minute time frame analysis. Here we will analyze the signals from MACD and whether it was worth following them. Actually, there were only two signals formed. The upward movement still continues, which is confirmed by the trendline. Therefore, we will only consider buy signals. In the morning, the MACD indicator turned up for the first time. At the moment when the signal was formed, the price immediately hit the level of 1.1990 from which it had already pulled back at night. We would like to highlight that this is not the high of the previous day, it is a more important extremum level. The fact that the price has already bounced back from it means a lot. So, when the price returned to it, there was a high probability of a new rebound. In this case, you should not rush to open long positions. The second time the MACD indicator turned upwards was already during the New York trading session. However, it was located well below the zero level. Therefore, this buy signal should also have been ignored. Later, it turned out to be false. 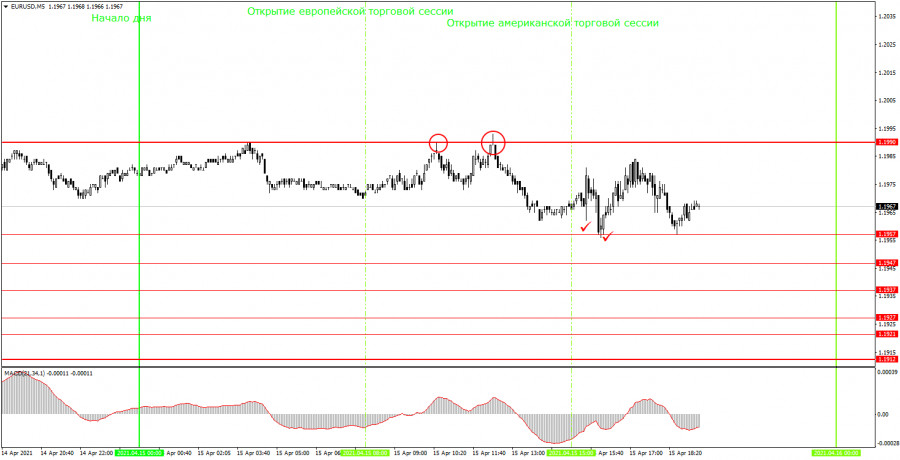 Now let’s take a look at the 5-minute chart. In the course of the day, three signals were formed here on a rebound from the level of 1.1990, and all of them were sell signals. The first one was formed at night, and we naturally did not take it into account. The second and the third signals could be used together. Upon formation of the first signal, we could open short positions, and at the time of the formation of the second one, short deals would not have been closed yet. However, it was still not possible to make a profit on this signal since the pair did not reach the nearest level of 1.1947. The level of 1.1957 is the daily low, that is, at the time the signal was processed, it did not exist yet. The pair also failed to go down by 30 pips that would be enough to close a trade at Take Profit. Well, this is the specifics of trading in the flat channel. So, this trade was closed at breakeven at the Stop Loss level. In the illustration, we check-marked places on the chart when retail sales and industrial production reports were published in the US. The first report turned out to be much stronger than the estimates, while the second was weaker than expected. However, neither the first nor the second report spurred any activity among traders.

How to trade on Friday:

On Friday, we recommend trading upwards on the 30-minute time frame as the uptrend currently continues. The ascending trendline supports the bullish trade. However, if the MACD indicator generates buy signals far below the zero level, then they should not be considered for trading. On the whole, the current situation is not very favorable. Also, beginners can trade from the levels of 1.1990 and 1.1915, aiming for a rebound or a breakout in both directions. Take Profit should be set at the distance of 30-40 pips. Stop Loss should be moved to a breakeven point when the price passes 15-20 pips in the right direction. On the 5-minute time frame, the situation is now very difficult. Here, a dozen of levels can be considered the key levels, but they are all located very close to each other. Therefore, it is now especially important that the signal is clear. If the signal is vague, then it is better not to enter the market. Most of the levels will be removed soon. As for the economic releases, a report on inflation in the EU will be published tomorrow morning.

Red lines are channels or trendlines that display the current trend and show in which direction it is better to trade now.

Technical analysis of USD/JPY for January 05, 2021

The big squeeze: welcome to the pelvic floor revolution

7 things you didn’t know about Selling Sunset ahead of season...

Can we hug now? When hugging will be allowed under new...

Major milestone to celebrate ahead? Go big on adventure

GBP/USD: plan for the US session on January 15 (analysis of...