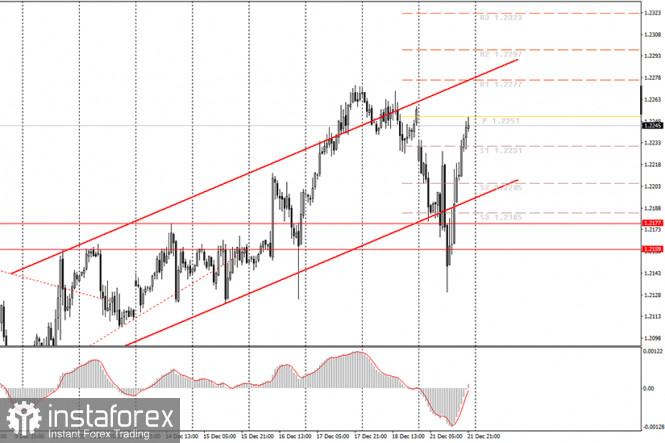 Analytics and trading signals for beginners. How to trade EUR/USD on December 22? Analysis of Monday deals. Getting ready

The EUR/USD pair was very volatile on Monday. We did not expect such activity from traders, since there should have been no news. However, quotes started to sharply fal, which was caused by the news of a new strain of coronavirus, which is 70% more infectious than the usual COVID-19. In such a situation, the US dollar could rise in price as a reserve currency (about the same thing happened in March), or it could be due to the fact that the markets simply began to panic. In the second case, one cannot say what exactly caused the dollar’s strengthening, especially since the pair’s quotes also began to significantly rise in the afternoon. As a result, the price initially fell by 100 points, and then increased by the same amount. It was, of course, very difficult to practice these movements, especially for beginners. However, we have said more than once that 2020 is not the best year for trading in the foreign exchange market. There have been too many events this year that have caused absolutely crazy trading. At the moment, one cannot even say what is the trend for the euro/dollar pair. On the one hand, the upward movement was brought back, on the other, the quotes were leaving the rising channel. Thus, according to the technical analysis, it is now possible to conclude that a new downward trend is forming, but fuzzy and implicit. We expect the pair to fall on Tuesday, and the MACD indicator managed to discharge to the zero level. Therefore, we are waiting for a new sell signal.

No macroeconomic report from the European Union or the United States on Monday. The entire fundamental background came down to the news about a new strain of coronavirus in the UK. Traders had nothing to pay attention to. And the news about the new virus cannot be interpreted unambiguously. There is no such pattern: the deterioration of the epidemiological situation in the world = the growth of the dollar (or the growth of the euro). So tomorrow, for example, the markets may continue to be in a highly agitated state.

A seemingly very important report on GDP for the third quarter is set to be released in the US on Tuesday. However, this is already its third assessment, and market participants perfectly understand what value to expect. Therefore, we believe that news about a new strain of coronavirus, if any, will be more important. New bursts of excessive market activity are not excluded.

1) Long positions have lost their relevance at the moment, as the quotes were leaving the rising channel. Thus, we would not recommend opening new long positions right now, no matter how attractive they may seem. Instead, you need to wait for a new upward trend in order to consider long deals.

2) Trading down looks more appropriate right now. The pair still went up a fairly decent distance and the MACD indicator is near the zero level. Thus, if a sell signal from MACD is generated, we recommend selling the pair while aiming for support levels 1.2205 and 1.2185. Target levels will be updated in the morning. Take note that trading is more risky now than during normal times.

Trading plan for the EUR/USD pair for the week of March...

The sgENGAGE Podcast Episode 185: Promoting Your Value as a Database...

Influencer Marketing Strategy: How to Scale a Business

Technical analysis of GBP/USD for December 07, 2020