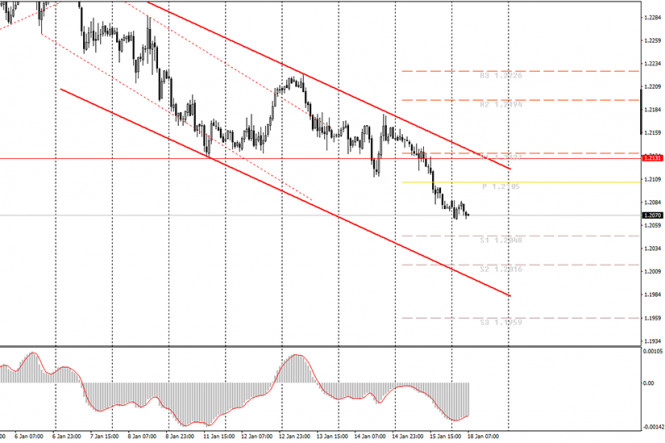 Analytics and trading signals for beginners. How to trade EUR/USD on January 18? Plan for opening and closing deals on Monday

The EUR/USD pair calmly fell last night, which started on Friday. Thus, novice traders who opened deals on the last sell signal from MACD could still remain with short positions that night. However, as we predicted in yesterday’s evening review, the MACD indicator turned almost immediately to the upside when trading started on Monday, as it has nowhere to go. But the price did not turn up and continues to fall in general. Thus, today’s trading will be difficult and not the usual for beginners. The downward trend continues, but there is no new sell signal and we don’t expect one in the near future. The MACD indicator needs to be discharged now, and the price needs to adjust. The same goes for a possible buy signal. The upper limit of the descending channel is far away. Therefore, if the price starts to sharply rise, then when it leaves the channel, it will go up by about 70-80 points. Considering that the average daily volatility of the EUR/USD pair is currently at around 75 points, it is unlikely that it will continue by at least 50 points after such an upward movement. Thus, the only possible option for today is a correction to the upper channel line and a rebound from it.

Nothing extraordinary happened on Monday night in terms of the foundation. There isn’t much exciting news in the European Union right now, but there are plenty of interesting events in America. Unfortunately, almost all of them are related to politics. The day after tomorrow, Donald Trump will officially leave the post of president of the United States, and Joe Biden will take over this post. The inauguration procedure is scheduled for January 20, to which Donald Trump will not come, and the Washington authorities are very much afraid that there will be mass and, possibly even armed riots. Therefore, Washington is now overcrowded with the military and the National Guard, and the Capitol is completely surrounded by barbed wire. Trump, who has been blocked by almost all social networks, already hardly even has the opportunity to organize any rally or protest. Nevertheless, many still fear that something will happen on January 20. But there is practically no news of an economic plan. As of today, no reports are planned either in the US or in the European Union.

1) Long positions are still irrelevant at the moment, as the downward trend remains in force. Those who wish to buy the EUR/USD pair should wait for the quotes to settle above the descending channel. In this case, you can consider long positions with targets at support levels 1.2194 and 1.2226. However, you should take note that after passing around 80 points in one direction, there is little chance of continuing the movement in the same direction.

2) Trading for a fall is more relevant now, but now novice traders need to wait for a new sell signal to appear. You are advised to open new short positions with targets at support levels 1.2048 and 1.2016. However, the MACD indicator must first be discharged to the zero level and only after that will it be able to create a new strong signal. Also, a rebound from the upper border of a new descending channel can be considered as a sell signal.

Analysis of GBP/USD on January 7. Donald Trump will undergo second...

Simplified wave analysis and forecast for EUR/USD, AUD/USD, and GBP/JPY on...

Candace Owens: ‘Donald Trump is More of a Feminist Icon Than...