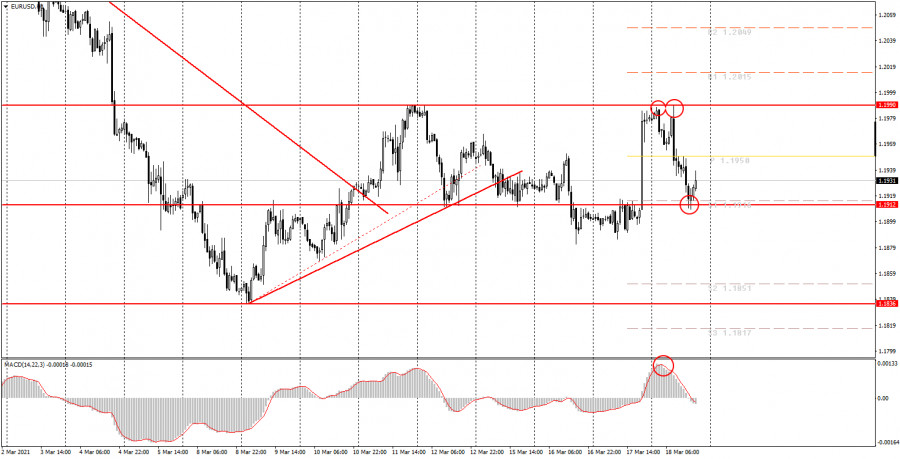 Analytics and trading signals for beginners. How to trade EUR/USD on March 19? Analysis of transactions. Getting ready for

The EUR/USD pair turned around the 1.1990 level on Thursday, from which it had already rebounded earlier, which is clearly seen in the chart. We highlighted this level as important. The pair rebounded off it twice, thus forming sell signals. This level was not analyzed in the previous review, because the results of the Federal Reserve meeting were not yet announced when this was written, but after it was publicized the pair went up 70 points in an hour. It is clear that the fact that the quotes settled above the 1.1912 level should not be interpreted as a buy signal. But rebounds from the 1.1990 level could and should have been worked out. The first of them happened at night, which can be clearly seen in the chart below. To be more precise, the price did not reach the 1.1990 level at night, by literally a point. Plus, many traders still sleep at night, so if this signal could not be worked out, then absolutely nothing terrible happened. But when the European trading session opened (it is marked with the first vertical green line in the lower chart), the pair rebounded off this level again and this signal had to be worked out for sure. Moreover, the MACD indicator turned down a little earlier. The targets were located at a distance of 30-40 points, but the pair went all the way to the nearest support level of 1.1912. Moreover, at the moment it also rebounded off this level, which can be interpreted as a buy signal. At the moment, the quotes are slightly decreasing, so Stop Loss can already be moved to breakeven, since the night is ahead. 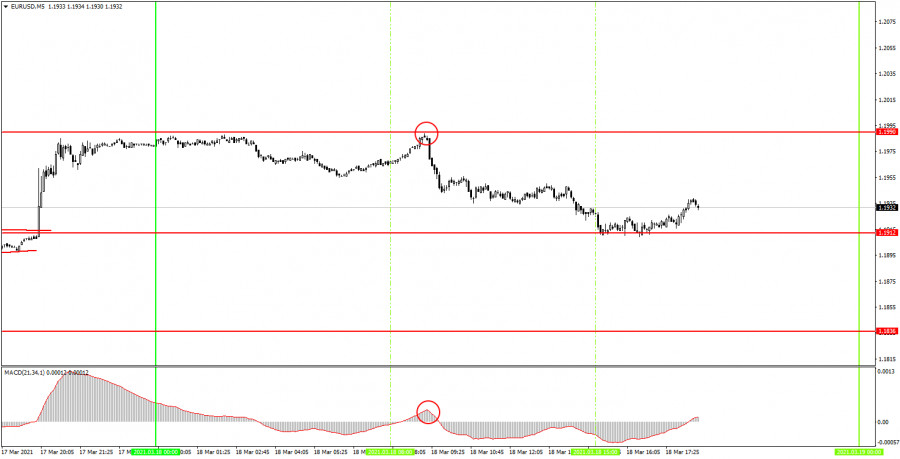 Let’s take a look at the 5-minute timeframe. The morning sell signal is clearly visible on it. Not only as a rebound from the 1.1990 level, but also as a downward reversal of the MACD indicator. Thus, whatever one may say, this signal had to be worked out. A rebound from the 1.1912 level is also clearly visible, or better to say, this level was not surpassed. As a rebound, we still recommend that you understand the point contact of an important level. However, the fact that it was not surpassed could also be worked out. At the moment it has not brought much profit and, perhaps, it is even better to close this deal now, since novice traders could already earn around 30-40 points of profit. Neither European Central Bank President Christine Lagarde’s speeches, Fed Chairman Jerome Powell’s speech, nor the US unemployment claims report had any slight impact on the pair’s movement throughout the day.

No major macroeconomic report or any other event scheduled for Friday both in the European Union and the United States. Thus, the fundamental and macroeconomic background will not prevent the EUR/USD pair from trading tomorrow. Therefore, we will only rely on technical signals during the day. There is no clear trend at this time. There is no trend line or channel. Therefore, you are advised to trade from 1.1990, 1.1912 and 1.1836. Together, they form a kind of lateral channel with a midline. Rebounds overcoming these levels can be interpreted as signals. You can also consider signals from the MACD indicator, but since there is no definite trend now, these signals require confirmation, otherwise, in the event of a flat, a great variety of them can be formed. It is safer to trade by levels today or tomorrow. We remind you that the 5-minute timeframe can be used to clarify the situation on the hourly chart. For example, an imminent signal on the 1-hour timeframe may be formed earlier on the 5-minute timeframe. Take note of setting the Stop Loss to breakeven if the price, after a signal has formed, moves in the right direction by 15-20 points.

Leader Of Pro-Black Activist Group NFAC Arrested And Charged By the...

Erica P. Loewe Begins Her New Role as the Director of...

Trading plan for the EUR/USD pair for the week of March...