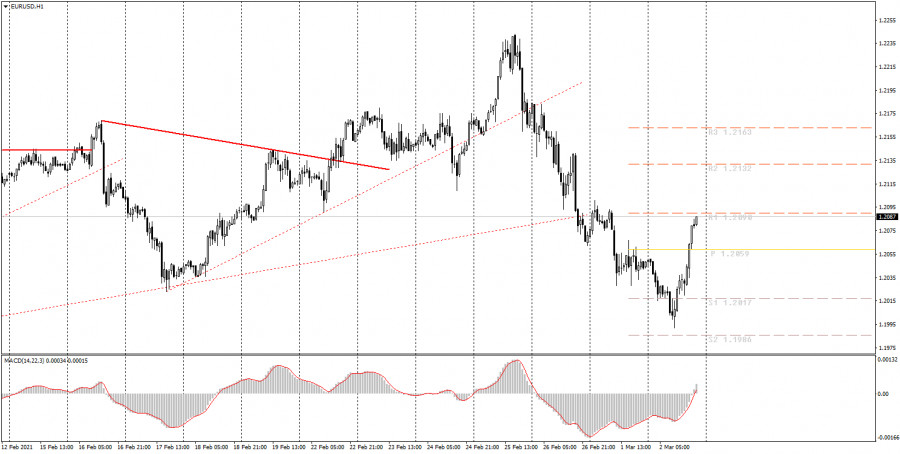 Analytics and trading signals for beginners. How to trade EUR/USD on March 3? Analysis of Tuesday. Getting ready for Wednesday

The EUR/USD pair turned up and started the upward correction on Tuesday, which we all had been waiting for from the very beginning of the week. Sellers did not find more strength for the pair’s succeeding decline. And the reasons for the pair’s sell-off are clearly over. Although it cannot be said that there were initially a lot of them. In the past few days, there have been several macroeconomic and fundamental factors that could contribute to the dollar’s growth. At the same time, none of them can be accurately called a factor that influenced the pair’s movement. That is, maybe all these factors provoked the dollar’s growth, or maybe none of them, and we have witnessed a banal technical correction. The main thing is different. Now the pair has begun to correct, and this correction may allow a downward trend line. As usual, there are a lot of options here. The end of the correction round can be determined by the downward reversal of the MACD indicator, but this does not mean that it will not be followed by a second round of correction. Therefore, we would say that tomorrow the probability of the price moving up and down is approximately the same. Since there is no trend line at the moment, both buy and sell signals can be processed. In our last article, we advised you to sell the pair if a new sell signal from MACD is generated, but such a signal was not generated over the past day.

The EU inflation report was published on Tuesday, which turned out to be slightly worse than traders expected. More precisely, this judgment concerns only core inflation, the usual consumer price index came out unchanged in comparison with the previous month. Nevertheless, we can assume that this report provided some assistance to buyers. Moreover, the time when the report was released and the time of when the upward movement had started coincide. But the report turned out to be weaker than forecasts, so it should have caused the euro to fall. Instead, we saw another round of growth…

The European Union and America is set to publish indexes of business activity in the service sectors. We also have the ADP on changes in the number of employed workers in the private sector in America, which is considered the second most important report on the state of the labor market after NonFarm Payrolls. Thus, in the morning, the index value above 44.7 could theoretically help the euro continue its growth. The more this value is exceeded, the greater the chances of growth. In the afternoon, the ADP report should exceed 170,000, and the ISM index – 58.7, in order for traders to start buying the US dollar again.

1) Long positions have lost their relevance at the moment, but the situation is confusing and ambiguous. The upward movement may continue on Wednesday, but now a new buy signal from the MACD indicator is required to open long positions. The target is near the 1.2132 level or at a distance of 40-50 points from the entry point.

2) You can also consider trading bearish, but this will also require a signal from the MACD indicator during the day. The closer to the zero level such a signal is formed, the more chances for it to be worked out. The targets are also located at a distance of 40-50 points from the entry point. When a clear signal forms and around 15-20 points worth of profit is gained, we recommend setting Stop Loss to breakeven.

Beginners in the Forex market should remember that every trade cannot be profitable. Developing a clear strategy and money management are the keys to success in trading over a long period of time.

Christmas Cheer From Both Sides of the Atlantic

Technical analysis of GBP/USD for February 04, 2021

Overview of the US stock market on April 14

911 Dispatcher Arrested for Not Returning $1.2 Million Accidentally Deposited Into...

Hallmark Expanding Mahogany Collection Into ‘More Than A Card Line’