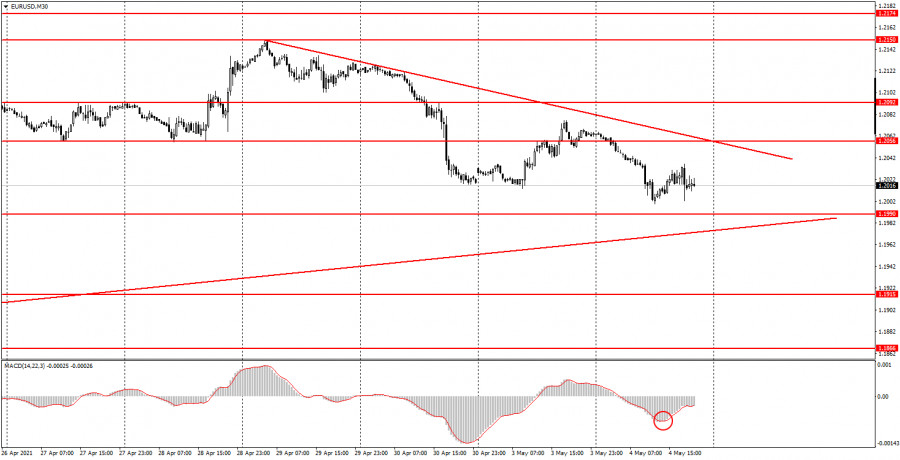 Analytics and trading signals for beginners. How to trade EUR/USD on May 5. Analysis of Tuesday trades. Getting ready for

On Tuesday, the EUR/USD pair resumed the downward movement that we had predicted earlier. On a more global 30-minute time frame, the price is going through a correction opposite to the uptrend that persisted throughout the month. Thus, the downward movement was predictable. However, on the 30-minute time frame, it looks more like a full downtrend since a descending trend line has been formed there. There are now two trendlines that novice traders can use that allow them trading both up and downwards. In the course of the day, only one signal from the MACD indicator was generated – a buy signal. However, from our point of view, the indicator’s turn to the upside was again too low, so this signal should be ignored. There were no other clear signals during the day as well as no important fundamental events or macroeconomic reports. 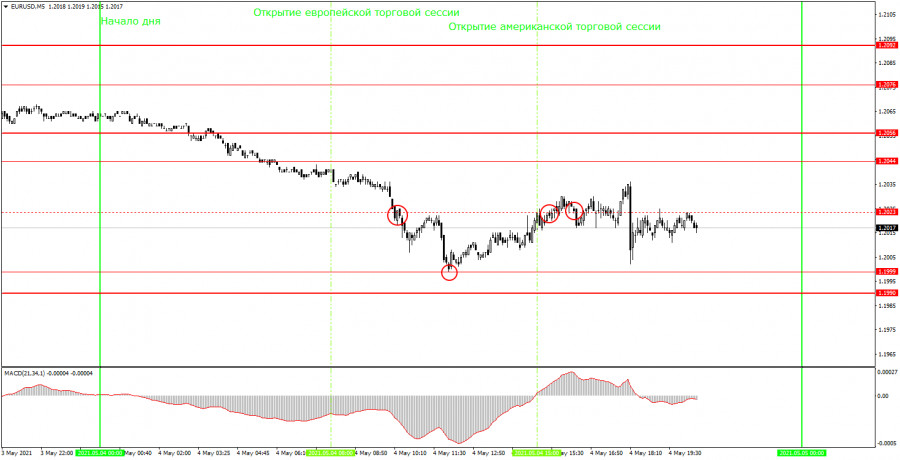 Now let’s take a look at the 5-minute time frame. Here, the situation is much more interesting. I would like to mention right away that we put circles on the chart to mark only those places where it was necessary to open positions according to the formed signals. The rest of the coming signals should have been ignored, and now let’s discuss why. The first sell signal was formed at the level of 1.2023 and the price consolidated below it. Therefore, beginners needed to open short positions with the target at 1.1999. Only 20 pips were left to reach the target. Then, there was a clear rebound from 1.1999, so short positions could have been closed with profit. A rebound from the level of 1.1999 served as a buy signal, so it should have been followed with the target at 1.2023. Again, the target was very close, so it was also possible to work with a Take Profit. On the other hand, it could fail to trigger properly. Further on, two signals were generated near the level of 1.2023, one for buying and one for selling. Those signals turned out to be false and brought a loss of 10 pips to beginning traders. Thus, everything that newbies could earn from the first two trades was lost in the second two trades. Not the best day to trade. Please note that volatility was very low during the time when we recommended to trade. It was just wihtin 40 pips. Since false signals had been generated twice near the level of 1.2023, this level lost its relevance and all subsequent signals should have been ignored.

How to trade on Wednesday:

On Wednesday, the price may continue either to move down and or to rise again. There are two trendlines at the moment, so the pair can stay trading between them. If it breaks through any of these lines, then the movement can get a new impulse. Tomorrow, you can trade using signals from the MACD indicator. Now it is rather difficult to say in which direction the pair will move. Therefore, novice traders should work tomorrow on the 5-minute time frame from the levels of 1.1990, 1.1999, 1.2044, 1.2056, and 1.2076 for a rebound or a breakthrough in both directions. Take Profit should be set at the distance of 30-40 pips. Stop Loss should be placed to a breakeven point as soon as the price goes in the right direction by 15-20 pips. Remember that it is best to trade using the most accurate and clear signals and ignore inaccurate ones. On Wednesday, the US will publish a relatively important ADP report on the number of employees in the private sector, as well as the ISM index of business activity in the services sector. This data can influence the market sentiment. The European Union will publish a less significant index of business activity in the services sector from IHS Markit.

Red lines are channels or trendlines that display the current trend and show in which direction it is better to trade now.

Netflix IT exec forced employees to use products from vendors that...

Is Palantir beginning to deflate on the stock market? It’s fallen...