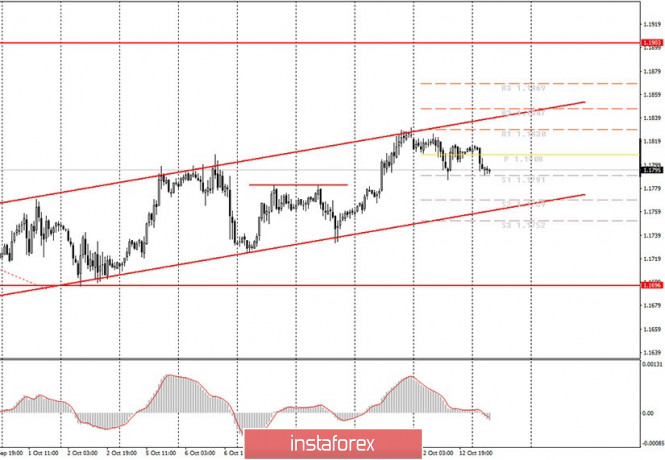 Analytics and trading signals for beginners. How to trade EUR/USD on October 13? Plan for opening and closing trades on Tuesday

The EUR/USD pair began a new round of corrective movement last Monday night, as we expected in yesterday’s evening article. Thus, at the moment we conclude that the correction continues, and the price may fall to the lower line of the ascending channel. Take note that the price has reached the support level of 1.1791, the level from which it rebounded yesterday. Thus, it is quite possible that the correction will be completed in the near future. The MACD indicator has discharged to the zero level, as we wanted, so now we can look for new entry points to the market and wait for buy signals. In general, the trend for the euro/dollar pair remains moderately upward. Not too large a channel slope and frequent corrections indicate that buyers are not rushing to the market at breakneck speed. However, the sellers’ positions are even weaker.

The fundamental background for the EUR/USD pair, in principle, remains the same, as can be seen from the nature of the pair’s movement, which does not change. To date, we will only receive minor reports from the European Union today, which are unlikely to pique the interest of traders. You can pay attention to these reports, but you should not wait for the market reaction to them. First of all, we are talking about inflation in Germany, which, like in the entire European Union, is already in deflation (negative inflation = falling prices instead of rising). According to experts’ forecasts, deflation in Germany will remain so until the end of September. However, as we mentioned in yesterday’s article, you should not attach too much importance to this factor. The euro has significantly grown in the past six months, which also affects inflation due to import-export operations. The same goes for US inflation, which is scheduled to be published this afternoon. In annual terms, this figure may be +1.4%. Inflation excluding food and energy products (more precise inflation) may be +1.7% y/y. However, the same thing – due to the strong decline in the dollar in recent months, this value can be misleading. In general, we believe that there will be no reaction today even to such important indicators as inflation. The whole world continues to recover from the coronavirus crisis, and is also preparing for its second wave. Therefore, almost all macroeconomic indicators, except for the most important ones, such as GDP, remain a formality at this time. Political and epidemiological factors remain in the first place in terms of importance.

1) Buy positions on the EUR/USD pair remain relevant at the moment due to the fact that the price continues to move inside the ascending channel. The downward correction may end near the support level of 1.1791. If the price overcomes this level before the MACD indicator turns up, forming a new buy signal, then the correction will continue to the lower border of the rising channel. When forming a buy signal, the targets will be the resistance levels 1.1830 and 1.1847.

2) Sell positions are currently not relevant. Traders could have earned several tens of points on a signal of a price rebound from the upper channel line, but we do not recommend opening new short positions at this time. To do this, you need to wait until the current upward trend has been cancelled, that is, for the price to settle below the upward channel.

Technical Analysis of BTC/USD for March 8, 2021

EU economy to grow in the second quarter of 2021

Overview of the EUR/USD pair. December 23. Markets rushed to panic...

This Year You Learn to Harness the Power of Digital Marketing

Black Women Business Owners Can Apply For $10,000 Grants From Visa

How Rick Ross’ $5.8 Million ‘Coming to America’ Mansion Is Paying...

Technical analysis of USD/JPY for October 29, 2020