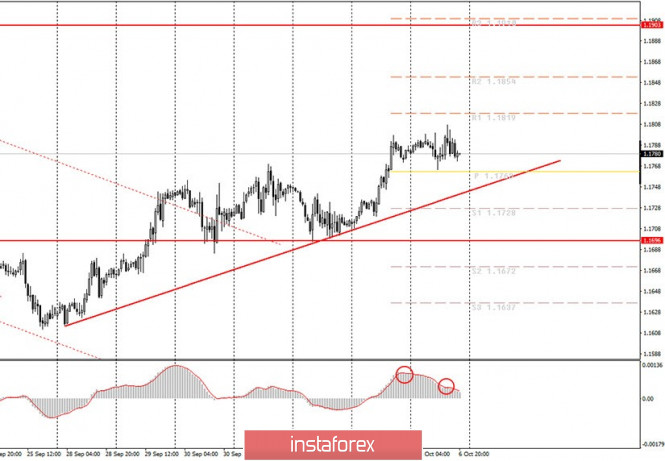 Analytics and trading signals for beginners. How to trade EUR/USD on October 7? Getting ready for Wednesday session

On Tuesday, October 6, the EUR/USD pair tried to resume the upward movement since the day began, but failed to overcome the previous local high of 1.1798. Two more attempts were made to resume the upward movement, but the pair rebounded off $1.18 each time. And so we observed a horizontal correction throughout the trading day. At the same time, the MACD indicator turned to the upside in the afternoon, but it previously failed to go down to the zero mark, which would mean its complete discharge and readiness to form new buy signals. In the morning, we recommended novice traders to wait for the correction and open new buy positions only after it is completed. In fact, there was no downward correction, as a result of which the MACD indicator generated a false signal (the second circle in the illustration). Therefore, the trend remains upward, and novice traders are still encouraged to wait for the downside correction to the upward trend line.

No macroeconomic report from the European Union and the United States on Tuesday. However, markets are currently ignoring data anyway, so this fact did not really matter. European Central Bank President Chrisitne Lagarde spoke during the day, who said that the central bank could go for new monetary easing to stimulate economic recovery. Lagarde is worried about the high rate of the euro, which negatively affects inflation and the pace of recovery. She also believes that the second wave of the coronavirus epidemic may strike the European economy again and no one knows what this blow will be. Also today, Federal Reserve Chairman Jerome Powell spoke, urging the US Congress to approve a new stimulus package for the American economy as soon as possible. “Lack of government support will lead to a weak recovery and create unnecessary hardship for households and businesses,” Powell said. The Fed chair, like his European counterpart, fears that the economic recovery will slow down.

Lagarde is set to deliver a speech in the EU on Wednesday, October 7, and the minutes of the last Fed meeting will also be published on this day in the United States. In fact, both of these events will not have any effect on the euro/dollar pair. There was no particular response to Lagarde’s recent speech and the Fed minutes is just a document summarizing the results of the last meeting in writing, which markets already know most of the time. Thus, scheduled events are unlikely to elicit a reaction from traders.

1) Buy positions on the EUR/USD pair remain relevant at the moment, since the upward trend line has been rebuilt and supports the bullish traders. Thus, we recommend novice traders to open new buy orders while aiming for 1.1819 and 1.1854 after the price corrects downward to the upward trend line and a new buy signal from MACD is generated. And so by tomorrow morning, we can see at what stage the pair is when we implement this plan.

2) Sell positions may become relevant again if the pair settles below the trend line. In this case, the first target will be the 1.1696 level, and we can only count on the pair’s successive fall if we overcome this level. Take note that the dollar is very reluctant to rise in price, and the fundamental background is not in its favor.

Trading plan for the EUR/USD pair on October 5