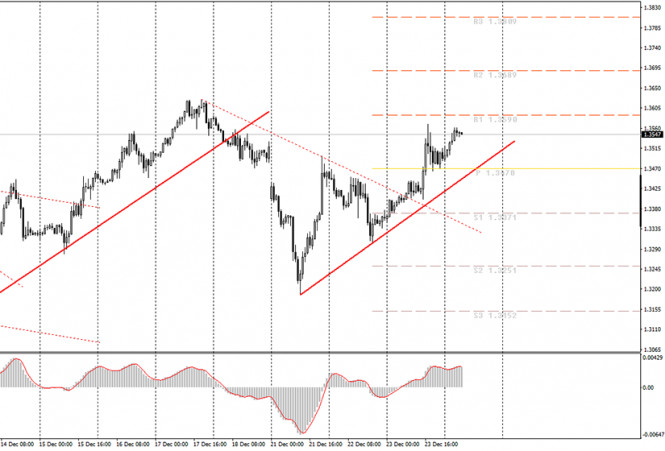 Analytics and trading signals for beginners. How to trade GBP/USD on December 24? Plan for opening and closing deals on Thursday

The upward trend resumed last night for the GBP/USD pair. The price failed to correct to the trend line, and the MACD indicator failed to discharge to the zero level. Thus, a new buy signal was formally created, but novice traders were advised to not work it out, which we talked about in yesterday’s article. At the moment, the markets are moving the pound/dollar pair based on their own expectations related to the end of the negotiation process between London and Brussels. Judging by the quotes’ movement, everyone believes that the deal will be achieved, which is why the pound is rising. Thus, if the euro/dollar pair can trade in a flat or swing mode in the final week of the outgoing year, then the pound can renew its annual and 2.5-year highs, it can continue an upward trend, or it can start a landslide fall. if there is no deal in the end, and the UK and the EU will start trading with each other on January 1 then it will be according to WTO rules. Therefore, the British pound can still expect sharp and strong movements, despite the semi-holiday status of the next few days. Everything will depend on what kind of news we receive from Brussels and London.

The macroeconomic calendar for Thursday does not include any important reports or events. As we mentioned, the holidays begin and there will be little news and reports for all currencies except the pound. The fate of the UK’s future relationship with the European Union continues to be decided. Recall that on January 1, Brexit will officially be completed after four years of ordeal and negotiations. Therefore, the parties have a week to agree on a deal and have a vote for it by their respective parliaments. There are few chances for its success, and there is too little time left. Nevertheless, the news that might come in the final days of the outgoing year is important to us. After all, they can cause the strongest spikes in volatility for the pound/dollar pair. So far, the pound is rising as markets continue to believe that the groups of Michel Barnier and David Frost will reach an agreement. But this does not mean that the parliaments will have time to vote, and starting on January 1 this deal will come into force.

1) Buy orders are now relevant, as a new upward trend has been formed. So now novice traders can wait for a new buy signal. It is still necessary for the MACD indicator to discharge to the zero level or the price to fall to the trend line and rebound from it. Without these signals, the upward movement can also continue because there are recoilless movements, but we remind you to be very careful and trade according to strong and clear signals. Aim for levels of 1.3590 and 1.3689.

2) Selling is now impractical as the downward trend has been canceled. So now you need to wait for the quotes to settle below the upward trend line and only after that should you sell the pair while aiming for the support levels of 1.3371 and 1.3251.

Technical Analysis of ETH/USD for October 22, 2020

Kamala Harris and Mike Pence Show Americans What A Debate Should...

Technical analysis of GBP/USD for February 22, 2021

Forecast and trading signals for GBP/USD on March 5. COT report....

Technical Analysis of BTC/USD for March 2, 2021

Here’s How Delta Employees Increased Credit Score by 30 Points and...

Technical Analysis of BTC/USD for March 1, 2021