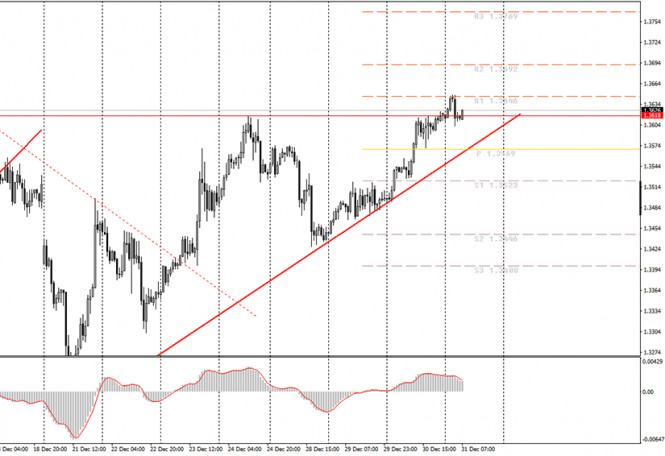 Analytics and trading signals for beginners. How to trade GBP/USD on December 31? Plan for opening and closing deals on Thursday

The GBP/USD pair continued to steadily increase during Thursday night trading, which is happening recently in general. But despite the fact that it is moving upwards during yesterday’s evening and today’s night trading, the MACD indicator began to decline. This is called “discharge”, when the direction of price and indicator movement does not coincide. Therefore, the last strong signal was formed at midnight on December 30. You can literally earn 20 points from it, if you close the deal on the MACD indicator downward reversal in just a couple of hours. The beginners who slept through this moment could earn more.

At the same time, if someone wants to open new positions on December 31, it is necessary to wait for the pound’s quote to decline to the trend line. In any case, either in order for the MACD to discharge to the zero level and form a strong signal, or in order to break through this trend line. In general, the price of the pound sterling, just like the euro, also continues to rise on New Year’s eve. However, there are still no special growth factors.

Strange enough, today’s macroeconomic economic calendar even includes one macroeconomic report on applications for US unemployment benefits. However, it is unlikely that anyone will pay attention to it at all, but it will help to form a certain idea about the unemployment rate. Recently, this indicator has tended to increase, although the official unemployment rate has been declining all this time. There is no other more important news. Yesterday, Boris Johnson and Ursula von der Leyen signed a trade deal that will take effect tomorrow when the UK officially leaves the EU. However, this event cannot be called important for the currency market. These are just signatures, and so it was clear that a deal was reached, agreed and would be approved and signed. In view of this, the pound sterling has been growing almost continuously during the past few months, so the signatures just don’t matter. It can also be noted that the British Parliament approved a bill describing a trade agreement with the European Union. However, no one expected that the Parliament would block this agreement on December 30 and thus turn the nine-month negotiations and the deal to disappear.

1) It is important to buy orders at this time, since the upward trend line supports the trend again. Therefore, if you are willing to, it is possible to continue trading up with targets at 1.3666 and 1.3711 today. However, it is not suggested for the beginners to wait for the formation of a strong buy signal in the form of a price rebound from the trend line or an upward reversal of the MACD indicator near the zero level.

2) Selling seems to be inappropriate at the moment, as the price is above the upward trend line. Thus, you should wait for the price to consolidate below the trend line in order to consider sales. The support levels of 1.3534 and 1.3447 are the targets for short positions.

What’s on the chart?

Important announcements and economic reports that you can always find in the news calendar can greatly influence the trajectory of a currency pair. Therefore, at the time of their release, we recommended to trade as carefully as possible or exit the market in order to avoid a sharp price reversal.

Beginners in the currency market should remember that not every single trade has to be profitable. The development of a clear strategy and money management are the key for a successful trading over a long period of time.

Health Screening in Singapore — How Much Does a Comprehensive Health...

6 Financial Goals for the New Year

Technical analysis for EUR/USD pair for the week of February 22-27,...

Survey Shows Almost Half Of Black Americans Would Rather Discuss Their...

Analysis of EUR/USD on January 25. Markets await the result of...