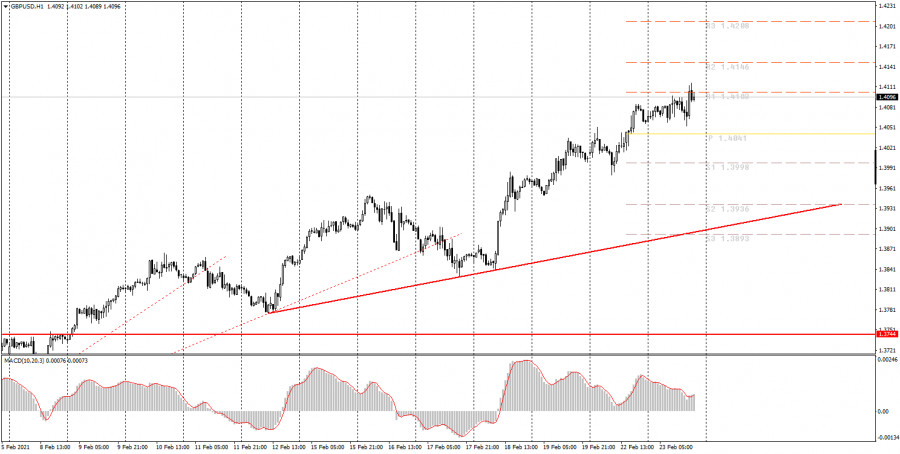 Analytics and trading signals for beginners. How to trade GBP/USD on February 24? Analysis of Tuesday. Getting ready for

The GBP/USD pair continued its somewhat weakened upward movement on Tuesday, but it weakened only in the context of a day. On the whole, it remains confident and strong enough. So, in general, you are advised to consider bull trading. However, as we have mentioned more than once, now is not the best time to trade the pound/dollar pair. The problem is that few signals are being formed now, and there are a lot of false ones among them. For example, no signal on Tuesday, although the pound/dollar pair as a whole continued to move upward. At the same time, the MACD indicator as a whole moved down today. This phenomenon is called uncorrelation between price and indicator. The indicator is declining not because it reacts to a decline in prices, but because it has nowhere to grow further. The MACD indicator is also worn for the movement of the “trend-correction-trend-correction” type, and not for the movement of the “trend-trend-trend-trend” type. There has not been a single round of correction for the pair since the morning of February 18, so the indicator has been discharged a lot in recent days, despite the direction of price movement. Selling the pair, according to our recommendations in the previous article, was not advised on Tuesday.

Several quite interesting reports released in the UK on Tuesday. However, as it is already clear now, at the end of the day, none of them provoked a movement in the market. In fairness, take note that traders rarely react to data on wages or changes in the number of applications for unemployment benefits. In addition to these two reports, the unemployment rate was also published, which rose by 0.1%, however, this report did not cause any reaction. So was Federal Reserve Chairman Jerome Powell’s evening speech in the US Congress.

The UK will host a speech by Bank of England Governor Andrew Bailey on Wednesday, as well as parliamentary hearings on the Bank of England’s monetary policy report. These two events are important enough, as the British central bank has long been walking along the edge of the abyss called “negative rates”. Bailey’s latest comments on this issue spoke in favor of the fact that the central bank is not going to implement these plans in the near future. However, some other members of the monetary committee take a slightly tougher and more radical point of view. One of them (Jonathan Haskel) will also give a speech on Wednesday. Thus, these speeches, and not Powell’s speech in the US Congress, may have an impact on the pair’s movement on Wednesday.

1) Long positions are relevant since a new upward trend line has formed. Thus, novice traders are advised to wait for a downward correction and a buy signal in the form of an upward reversal of the MACD indicator or a price rebound from the trend line. The targets in this case will be located at a distance of 50-60 points from the entry point.

2) Short positions have lost their relevance again, therefore, in order to be able to consider them, you need to wait for the price to overcome the upward trend line. Even if it happens on Wednesday, it is unlikely that the pound will lose much after this event. At the moment, the price and the trend line are separated by about 180 points.

US dollar is forecasted to decline in 2021

Investigation Determines Police Officers Had No Justification to Stop or Use...

Bitcoin’s market liquidity is currently much lower than Gold

This is a correction. Cryptocurrency market results for 2/24/21