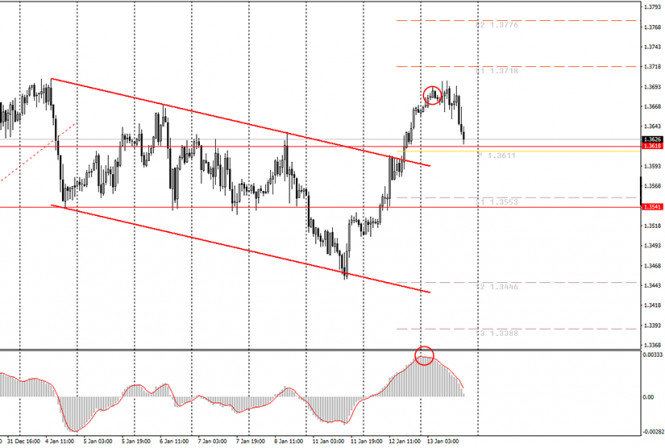 Analytics and trading signals for beginners. How to trade GBP/USD on January 14? Analysis of Wednesday. Getting ready for

The GBP/USD pair continued to move up until the morning on Wednesday, February 13. Thus, novice traders could formally keep long positions opened on the signal that the quotes have firmly settled above the descending channel. The MACD indicator subsequently turned down, and did so before the price fell, since it had nowhere to go, however, novice traders could also earn around 50 points on this signal. Since the downward trend was cancelled, then we should expect a new buy signal, which was not created during the day. Thus, at the moment, a new upward trend has been created, but the situation for the pound is twofold. The pound/dollar pair may fall by another 150 points the next day, or it may test the 1.3702 level once again. Thus, beginners are advised to track buy signals today and tomorrow, but only strong ones and maintain them very carefully in order to avoid changing the direction of movement and getting unnecessary losses.

Fundamentally, nothing interesting for the British pound on Wednesday. The US inflation report drew the most attention, but it did not have much impact on the pair’s movement. On the whole, neither the pound nor the dollar unambiguously supports the fundamental background. Both currencies are equally likely to strengthen in the coming days. There might be a lot of news these days, it will be mixed (political, economic, reports, speeches). Thus, it is impossible to make an unambiguous conclusion as to which of them will affect the pair’s movement and which one will not.

Federal Reserve Chairman Jerome Powell will deliver a speech on Thursday, January 14. Not only will he talk about monetary policy and the economy, but he might also mention topics like cryptocurrencies, for example. In general, everything will depend on what exactly Powell says. Although there is reason to believe that his speech might be interesting, after all it is his first one for 2021.

1) Buy orders became relevant again, since the pair’s quotes left the descending channel. Thus, you can now consider long positions, but after a downward correction cycle, the indicator discharges to zero and a new buy signal appears. Aim for the resistance level of 1.3718 (to be specified Thursday morning).

2) Sell positions have lost their relevance. Now you need to wait for a new downward trend or the end of the current upward trend, in order to consider trading bearish again. The situation is unlikely to change until Thursday morning.

EUR/USD analysis for September 14 2020 – Potential completion of the...

Overview of the GBP/USD pair. March 2. Boris Johnson is going...

Analysis and forecast for EUR/USD on September 9, 2020

How did the price correction strengthen Bitcoin’s position?

Technical Analysis of EUR/USD for March 2, 2021