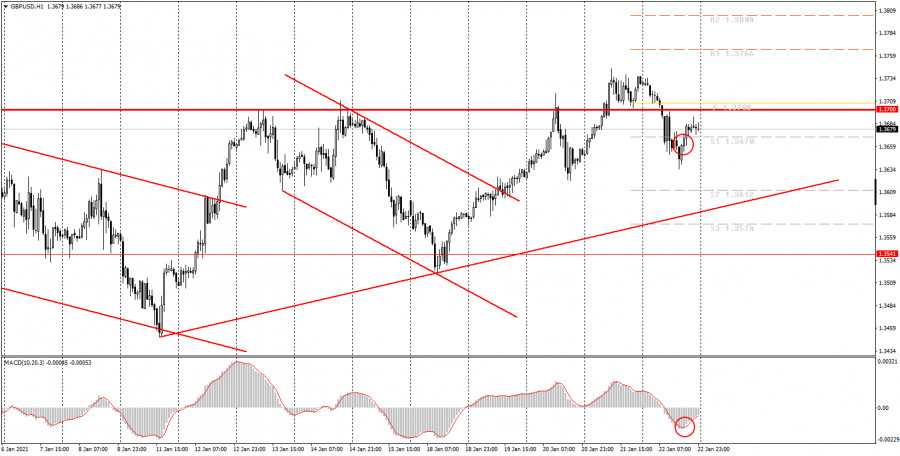 Analytics and trading signals for beginners. How to trade GBP/USD on January 25? Analysis of Friday. Getting ready for Monday

The GBP/USD pair quite unexpectedly began to correct on Friday, January 22, although after surpassing the 1.3700 level it would be more logical to see the upward movement continue. However, market participants felt the need to slightly retreat. As a result, the correction could already be completed. Last Friday, the MACD indicator initially fell rather far, below the zero level, and then formed a buy signal (circled in the chart). Thus, novice traders could open long positions as early as Friday. Of course, I was a little embarrassed by the fact that the trading week was ending, but the risk was justified. When transferring deals to a new week, it is better to simply always set the Stop Loss level so that you do not get losses when opening with a gap on Monday. Also, beginners could work out a buy signal from January 20, which could get about 45 points of profit. Recall that all this time the pound/dollar pair is in an upward trend after the price settled above the downward channel. We also built an upward trend line, which shows the current trend even more eloquently.

The UK December retail sales report was released on Friday. Taking into account fuel sales, the growth was 0.3% m/m, excluding 0.4% m/m. The forecasts were almost three times higher. Business activity indices were also published, which were also worse than predicted values, while the service sector in January fell from 45.2 to 38.8. As we mentioned in the article on the euro/dollar, there is nothing surprising about this. In the European Union, business activity in the service sector dropped to 45 with one lockdown in winter, meanwhile, there were two lockdowns in the UK, so the service sector suffered even more. Considering the fact that the macroeconomic reports from the United States were quite good, it was absolutely logical for the pound to fall on Friday. We can only hope that this was a reaction from the markets, and not just a coincidence.

No macroeconomic reports from the UK and the US on Monday. No other event scheduled either. Therefore, most likely, we will have a boring Monday. At the same time, traders will again seek to bring the pair back to the 1.3745 high. As we have noted long ago, traders do not need a foundation now to actively trade or continue buying the pound. Recall that from a fundamental point of view, the British currency continues to grow absolutely groundless.

2) It is not recommended to consider short positions now, since there is an upward trend. Thus, you should only open short positions when the price has settled below the trend line. The targets in this case can be located around 1.3540 and 1.3500.

Biden Blinded by Offset’s Bling as The Migos Rapper and Common...

Remembering the Life of Mary Wilson, Founding Member of The Supremes

EUR/USD: plan for the US session on February 9 (analysis of...

ESPN’s Sage Steele Gets the Business From Twitter for Response to...