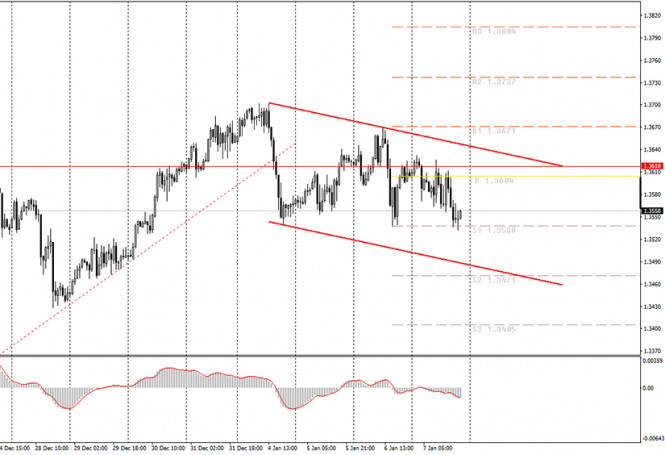 Analytics and trading signals for beginners. How to trade GBP/USD on January 8? Analysis of Thursday. Getting ready for Friday

The GBP/USD pair tried to resume the downward movement on Thursday, January 7, however, it changed direction several times during the day. Each change ended with a reversal of the MACD indicator. That is, the MACD indicator has generated two sell signals in a day, each of which cannot be considered false, but neither of them brought any profit. Thus, the situation is as follows: there is a downward trend, but it is rather uncertain. There is a descending channel, but rather weak. At the moment, the pound/dollar pair has failed to overcome the support level of 1.3538, from which it had already rebounded earlier. Thus, novice traders can wait for a more favorable time to open positions. By and large, there is nothing to do now. You can trade on a decline, and this requires new strong signals from the MACD. The signals that were created today could not be worked out, since they were created slightly below the zero level. Thus, for a new signal, we recommend waiting for the indicator to discharge properly.

Fundamentally, everything remains difficult for the British pound. We cannot say that traders have started to work out macroeconomic statistics. Market participants have long been ignoring the fundamental background. And events of a political nature in the United States unexpectedly supported the dollar. However, this may be a simple coincidence. In Britain, epidemiological problems are now in first place, but they also do not find their reflection on the pair’s graph. Therefore, for now, beginners can only pay attention to the technical picture.

No major UK releases scheduled for Friday, January 8. Therefore, you should focus on America, where a rather important report on NonFarm Payrolls will be released. We believe that all other publications will not have any impact on the pair’s movement. The NonFarm Payrolls report may not work either. For example, if the actual value is as close as possible to the forecast. There will be nothing more to pay attention to on the last trading day of the week.

1) Buy orders have lost their relevance, since there is a downward trend and a descending channel has appeared. Thus, in order to be able to consider long positions, you should wait until the pair’s quotes settle above the descending channel. In this case, long positions can be opened with targets at 1.3671 and 1.3737. However, this scenario is not expected until Friday morning.

2) Sell positions are relevant at this time, but today, for example, two semi-weak, semi-false signals were created. Thus, we now recommend waiting for the MACD indicator to discharge to the zero level and only after that, if the quotes remain inside the descending channel, wait for a new sell signal to appear and reopen short positions with targets at 1.3538 and 1.3471.

Technical Analysis of GBP/USD for November 2, 2020

Trading plan for the EUR/USD pair on December 3. COVID-19...

Even With Senate Control, Democrats Will Need Buy-In From GOP on...

Meet The Black Entrepreneur Launching Her Own Brand of Menstrual Cups

USDCAD rejected at back test of resistance and previous support zone