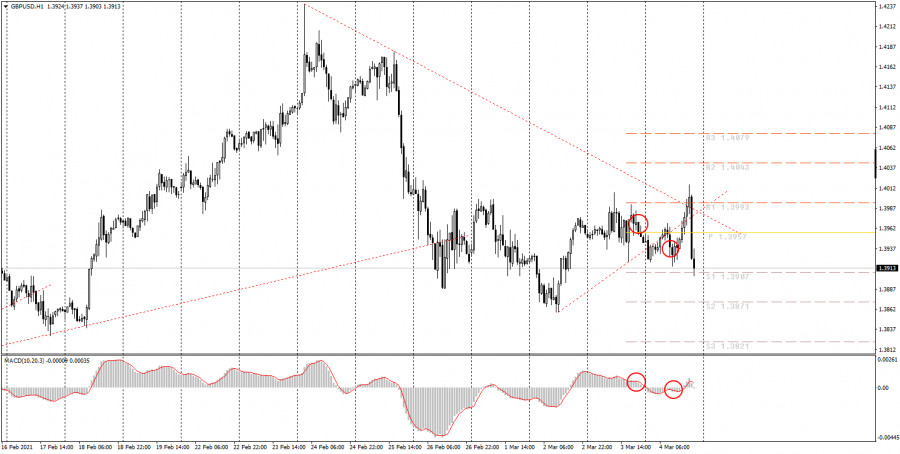 Analytics and trading signals for beginners. How to trade GBP/USD on March 5? Analysis of Thursday. Getting ready for Friday

The GBP/USD pair was trading like a nightmare on Thursday. There were several signals that could bring a lot of losses, but with careful consideration of the situation, such a scenario could be avoided. In the Wednesday article, we advised you to consider both buy and sell signals, since traders had two trend lines at their disposal. The small, upward trend line was canceled almost immediately, but even earlier, following the release of the previous day’s article, the first sell signal was formed (circled in the first circle). The MACD indicator turned to the downside, so novice traders could open short positions. According to our recommendations, the targets were located at a distance of 40-50 points from the entry point. The entry point is around the 1.3969 level. The price dropped 53 points from this level, so the first signal could be closed by Take Profit or in manual mode if novice traders monitored the market at night. The price crossed the rising trend line when this signal was being processed, the upward trend was canceled and so only sell signals should be considered. Such a signal appeared in the morning (encircled by the second circle) and it turned out to be false, since the price did not continue the downward movement after it was formed. However, the pair went 23 points from the entry point (1.3939) to the lowest point within this movement, so if traders set Stop Loss to breakeven in time, they could leave this deal without loss. If we didn’t have time, then the losses would have reached 23 points (leave the deal by the reversal of the MACD indicator up). The last two candles in the chart are two more signals, buy and sell, which we did not even bother to mark. The first buy signal is to overcome the downward trend line, however, the price has already gone up about 75 points when it was formed, so the signal is weak and we do not work it out. Immediately after that, the MACD indicator turned down, forming a sell signal, but at this point the downward trend had already been canceled since the downward trend line was surpassed, so we also did not work out this signal. As a result, novice traders could earn 20-40 points on Thursday.

The UK construction PMI was released on Thursday, which supported the British pound. It was after this report that the pair began to move up by 75 points. The quotes started to fall after Federal Reserve Chairman Jerome Powell’s speech began.

In addition to macroeconomic reports, US Treasury Secretary Janet Yellen will also deliver a speech on Friday. She might say something interesting, just like Powell today. Thus, the market might significantly react, so you need to be ready to close positions or brace for strong movements and sharp reversals when her speech is about to begin. However, the Nonfarm Payrolls report can also provoke serious movements.

1) Novice traders should not trade the pound/dollar pair on Friday. . Both trend lines have been overcome, so there is no trend right now. Moreover, Thursday’s trading showed that the markets are somewhat erratic, so the direction of movement often changes, and tomorrow, due to reports and Yellen’s speech, the storm may intensify.

Technical Analysis of BTC/USD for November 25, 2020

Pfizer and BioNTech Will Apply for Emergency Use Authorization to the...

Ethereum – Are More Gains Ahead?