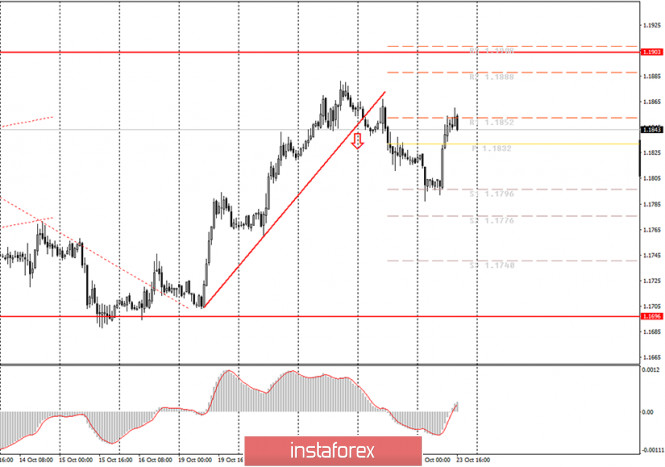 Analytics and trading signals for beginners. How to trade the EUR/USD currency pair on October 23? Analysis of Friday’s deals.

The hourly chart of the EUR/USD pair.

The EUR/USD currency pair was trading higher for most of the day on Friday, October 23. This is exactly what we talked about this morning. The pair needed to adjust to resume the downward movement later. Likely, a downward trend has also formed now, as the quotes once again failed to overcome the level of 1.1900 over the past three months, which is still the upper limit of the side channel. An eloquent downward turn was made on the way to this level. Thus, the trend is now characterized by a downward trend. Therefore, a new reversal of the MACD indicator down, which may happen in the next few hours, can be regarded as a signal for sales. In general, we have repeatedly drawn the attention of novice traders to the fact that the euro/dollar pair continues to trade mainly inside the side channel. Thus, if the upper line could not be overcome, respectively, there is a high probability of going down to the lower border of this channel. Therefore, we expect a drop to the level of 1.1696.

On October 23, the following scenarios are possible:

1) Purchases of the EUR/USD pair have ceased to be relevant at the moment since the price is fixed below the ascending trend line. The previous local maximum (1.1867) price also failed to breakthrough today. Thus, it is recommended for novice traders to resume trading for an increase after the formation of a new upward trend or the refraction of a downward one, which is still not expected during the current day.

2) Novice traders are recommended to trade on the downside. The pair corrected during the day, and the MACD indicator was discharged, so you can expect a sell signal from the MACD today. In this case, we recommend opening new short positions with targets of 1.1796 and 1.1776.

What is on the chart:

MACD indicator(14,22,3) – a histogram and a signal line, the intersection of which is a signal to enter the market. It is recommended to use it in combination with trend lines (channels, trend lines).

Uber gets punished on the stock market after announcing losses of...

GBP/USD: plan for the European session on November 26. COT reports....

What cryptocurrency to buy right now?

EUR / USD decline amid contrast in business activity data in...

Tourism suffers again on the stock market due to delays in...