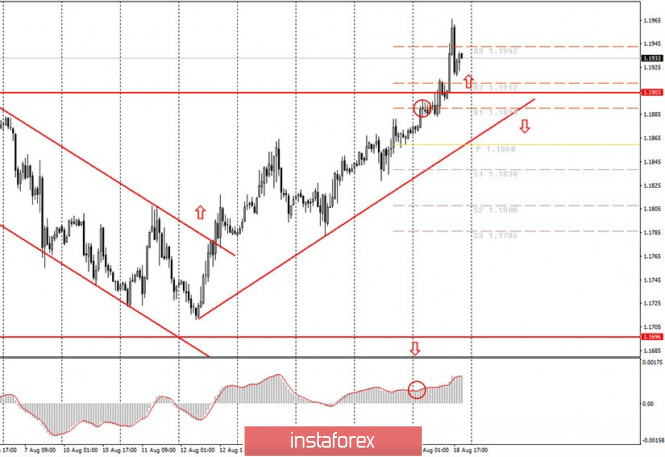 Analytics and trading signals for beginners. How to trade the EUR/USD pair on August 19? Analysis of Tuesday trades. Preparation

The EUR/USD pair continued its upward movement on Tuesday, August 18. The illustration shows that the last upward reversal of the MACD indicator is encircled in red and it formed tonight. Unfortunately, most traders and novice traders sleep at night, so few opened buy positions. However, they had such an opportunity in the morning, when the price had not yet gone very far upward. This is the market. Signals can be generated at any time of the day. Another thing is remarkable. The price has officially exceeded the 1.1903 level today, which we previously called the upper line of the sideways channel 200 points wide. Thus, only the upward trend line remains in action, which continues to make long positions relevant. All three resistance levels for today have been reached. Despite the fact that the pair dropped 35 points a few hours ago, the MACD indicator has not yet reversed downward, so long positions can still be kept open. However, we recommend closing them at the current levels.

From a fundamental point of view, there was not much news for the euro/dollar pair again today. However, there is such a thing as a general fundamental background – these are events that have a long-term impact on a particular currency. For example, coronavirus is such a topic for the US dollar. However, the epidemic has begun to recede in the US in recent weeks, so we can not conclude that today’s collapse in the dollar is somehow connected with the pandemic overseas. But the economic and political problems have not gone away. A striking example of a long-playing fundamental background is the overall fall of the US economy by 33% in the second quarter. Traders and investors understand that with such losses, recovery will take a long time and so they do not want to buy the dollar. In addition, the Democrats and Republicans can not agree on a package of financial assistance to the US economy (the money should be intended for the unemployed, small and medium-sized businesses), which also negatively affects the US currency’s appeal in the Forex market.

The European Union is set to publish inflation for July on Wednesday, August 19. This report usually has a big impact on any currency, but it may not have a proper impact at this time. First, the real value of inflation must differ from the forecast value in order for traders to start trading based on this. Secondly, after today’s strong growth, a downward correction should follow. Perhaps it will pass at night, perhaps not. As long as the upward trend line remains relevant, we continue to recommend considering only long positions on the euro/dollar pair. The forecast for inflation in the European Union is 0.4% y/y. If the latest report exceeds this figure, then we can expect a new growth of the pair and the euro, but only if the price has time to adjust by the time this report is released.

The following scenarios are possible on August 19:

1) Long deals on the pair at this time remain relevant, as the price continues to be above the rising trend line. Thus, at this time, we advise novice traders to wait for a new round of a downward correction, after which, wait for a new reversal of the MACD indicator upwards around next morning, and then enter the market again with purchases. In any case, the MACD indicator will turn down in the near future, as it cannot keep growing.

2) You are still advised to not consider selling the currency pair, since the price is above the trend line. We suggest novice traders to close the price under the trend line at the end of an hour, and in this case it will be possible to consider pulling down quotes while aiming for 1.1838 and 1.1808. However, now the price is too far from the trend line, therefore, in the near future it is unlikely that the price will settle below it.

Red lines are the channels or trend lines that display the current trend and show in which direction it is preferable to trade now.

Important announcements and economic reports (you can always find them in the news calendar) can seriously influence the trajectory of a currency pair. Therefore, at the time of their release, it is recommended to trade as carefully as possible or exit the market in order to avoid a sharp price reversal.

Beginners in the Forex market should remember that not every single trade should be profitable. The development of a clear strategy and money management are the key to success in trading over a long period of time.

GBP/USD: plan for the European session on September 14. COT reports....

Good Financial Reads: What You Need to Know About Your Credit...

Trading recommendations for the GBP/USD pair on October 23

Hot forecast and trading signals for GBP/USD on October 19. COT...