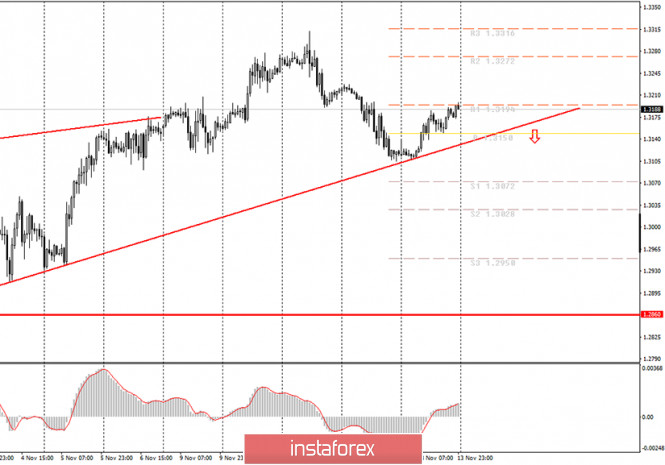 Analytics and trading signals for beginners. How to trade the GBP/USD currency pair on November 16? Preparation for trading

For the GBP/USD currency pair, trading during the last trading day and the entire week as a whole raised a lot of questions. In short, the pound continues to rise in price at a time when there is no particular reason for this. It continues to rise in price when it would be most logical to fall. However, as we have said many times, traders move the markets, not news or fundamental background. Fundamental analysis is very important and often predicts the long-term trends of the pair. However, at this time, it does not correspond to what is happening in the market for the pound/dollar pair. The upward trend line keeps the British pound’s prospects up. Thus, it is still recommended to consider trading for an increase until this line is crossed. We cannot say that the pound/dollar is now in a side channel in the long term, as the euro/dollar pair, so the pairs are moving differently now. This, in turn, means that the main reasons for the price movement are not in the US dollar.

The fundamental background for the British currency over the past week has been “moderately negative”, but in general, it remains simply “negative”. Last week, the UK released several macroeconomic reports (unemployment, GDP, industrial production), which once again confirmed that the British economy is experiencing problems. On the one hand, who is not experiencing them now? On the other hand, the crisis in the UK is much deeper than in many EU countries, even those that are most severely affected by the “coronavirus” infection. The UK was the most affected EU country by COVID-2019 during the first “wave”. Currently, only Spain and France “overtake” Britain in this sad rating. However, Britain still ranks as one of the top countries in terms of daily recorded cases of the disease and the first in Europe in terms of the number of deaths from COVID. Needless to say, all these “anti-records” will affect the economy. On its recovery and/or growth. And apart from the immediate problems, London can’t agree with Brussels on a trade agreement that will allow them to trade without duties after Brexit, that is, as they do now, when Britain is still a member of the European Union. If there is no deal, and everything goes to the point that there is no deal, then this will be a new, additional blow to the British economy. We have already said in our fundamental articles that the losses from Brexit for the UK amount to tens or even hundreds of billions of pounds. And Britain began to bear these losses back in 2016. And will continue to carry them into 2021, even if a trade deal is still in place. However, if an agreement is not reached, the losses will be higher. These are no bright prospects for the British economy.

On November 16, the following scenarios are possible:

1) Purchases of the pair look more relevant now, as the upward trend, which is signaled by the trend line, remains. However, it is possible that in the near future the trend line will be overcome and a downward trend will begin. However, until this happens, it is recommended to trade for an increase with the target of 1.3272. The MACD indicator has formed a buy signal near the trend line. At this signal, you can still stay in purchases, or wait for the next one.

2) Sales, from our point of view, are not appropriate now. To have a reason to sell the pound/dollar pair, novice traders should wait for the price to consolidate below the ascending trend line. In this case, it is recommended to open sell orders with the target level of 1.3072.

What is on the chart:

MACD indicator – a histogram and a signal line, the intersection of which is a signal to enter the market. It is recommended to use it in combination with trend lines(channels, trend lines).

Overview of the EUR/USD pair. March 16. The European Union is...

GBP/USD. Boris Johnson – the” destroyer ” of the British economy

Hot forecast and trading signals for EUR/USD on October 19. COT...

Hot forecast and trading signals for GBP/USD on November 11. COT...