Biden assures trillions of stimulus amid the US dollar’s strength. Overview of USD, EUR, GBP

December’s US labor market report surprised the markets entirely. The number of employed declined by 140 thousand, instead of the expected employment growth but with a slower rate than in November. The market surprisingly did not react negatively to this data, but on the contrary, there was a positive reaction due to the noticeably higher wage growth rate than predicted.

It was noted in the previous review that the dynamics of inflation-protected bonds TIPS indicates sharply rising inflation expectations, and this growth is not among ordinary consumers, but in the business environment. Nonfarm have confirmed this trend – high wage growth rates indicate that the belief in a weak dollar has significantly shaken.

The simultaneous 140,000 decline in Nonfarm payrolls supported the existing expectations of additional fiscal stimulus in the first days of the new U.S. administration. These hopes were strengthened by the US President-elect Joe Biden who said last Friday that he will submit new proposals this Thursday to increase the stimulus into trillions.

So far, the markets are sure that the Democrats are ready to expand subsidies to the economy, but now that the goals have been achieved and full control of the Senate has been gained, populism is no longer needed. It will be replaced by pure pragmatism. 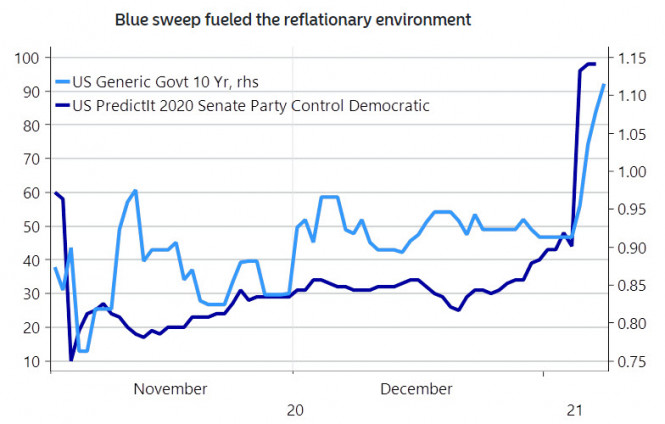 Markets will wait for specifics, since the lack of information can contribute to the growth of volatility. In this case, we must assume that the demand for the dollar may increase.

The estimated price for EUR/USD unexpectedly declined on Friday, which sharply increased the chances of a deep correction. Nothing foreshadowed such development even in the middle of the week. The CFTC report also turned out to be neutral for the euro with a slight margin of positivity, as the net long position increased by 75 million to 21.981 billion during the reporting week. 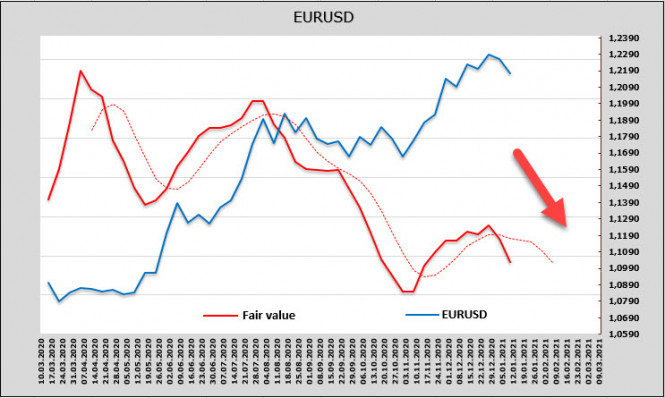 The estimated price leaving below the long-term average is primarily due to the multi-directional dynamics of yields. The yield on 10-year treasures reached 1.12%. Its impressive breakthrough began on January 5, when the Capitol in Washington was attacked and then followed by the publication of Nonfarms, which is considered to be the final impulse. At the same time, the yield of the German Bundesbank is lower than in December, which indicates a reversal in interest rate expectations and a possible redistribution of capital flows in favor of the US dollar.

There is additional evidence of a reversal. Eurozone’s November retail sales declined by 6.1% and its December inflation was -0.3%, while the US inflation report is likely to show a visible growth. According to the European Commission, the sentiment index in the services sector declined to -17.4p. This indicates that the eurozone will lag behind the US in deploying stimulus programs.

The pound faded into the background and followed in line with global trends due to the lack of significant macroeconomic changes. The CME net long position for the reporting week declined by 96 million to 312 million. The bullish advantage is insignificant and the target price does not show any direction. 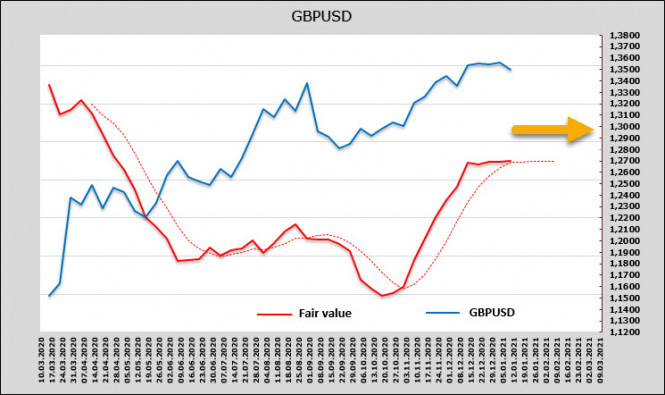 On Friday, an extensive package of macroeconomic data will be released, including an estimate of the GDP growth rate from the NIESR. It is possible that more clarity will come. At the moment, it should be assumed that the pound has no direction and will most likely trade in a sideways range. The support level is around 1.3420, while the resistance is at 1.3620. We can exit the range if new information on US stimulus appears.

Hot forecast and trading recommendations for GBPUSD on 09/21/2020

Supreme Court’s betrayal and Washington streets’ rallies over the weekend

Create Convincing Marketing and Sales Copy With This Tool

Technical Analysis of GBP/USD for November 16, 2020