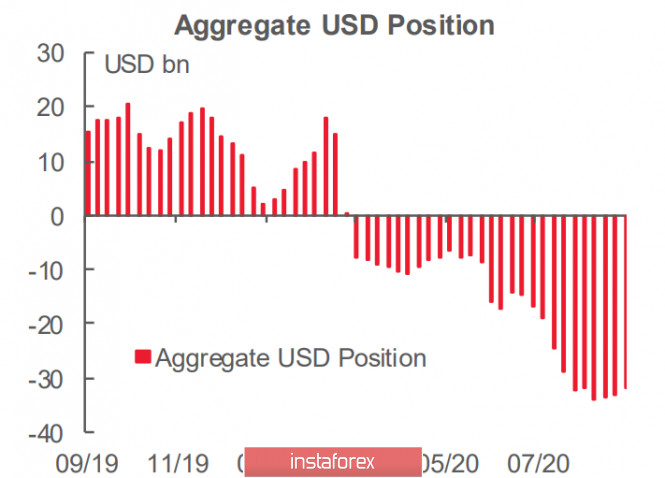 Dollar is under pressure again based on the CFTC report. Overview of USD, EUR, GBP

This morning, ATP stock indices declined amid rising concerns about a second wave of coronavirus, which threatens to bring down national economies again.

According to last Friday’s CFTC report, market positioning shows the third consecutive reduction in the short position on the US dollar, which now stands at -31.747 billion. This reduction is primarily due to the sales of the euro and the pound, which entered the clinch again after the resumption of Brexit negotiations did not lead to positive changes. Although it was lowered, the total volume of the short position remains huge.

This misunderstanding will be simply resolved if we assume that it is not inclined to strengthen in investor calculations, but continues to be under strong pressure despite the decline in the short position on the dollar. The dynamics of oil futures confirms this conclusion – the dollar continues to be under strong pressure and the chances of its growth against most G10 currencies look low this morning.

Despite the fact that the euro’s long position was reduced by 2.531 billion, it is still very high at $ 26.445. In addition, a number of other parameters, such as the attractiveness of stock markets and the yield spread in the US and the eurozone, keep the majority of investor’s demand for the euro at a high level. The target price declined but this only led to a short correction at the spot and a side range. 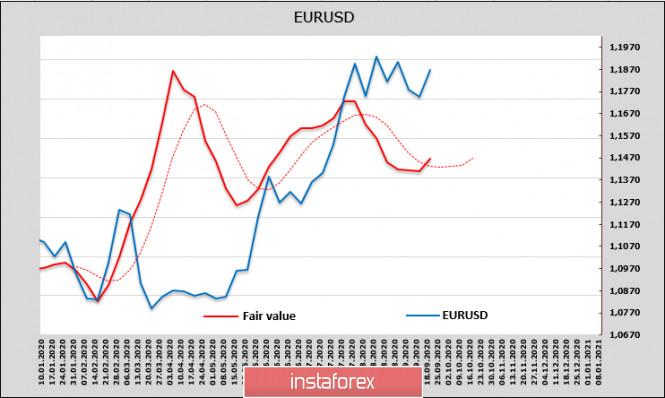 But the situation has changed. The calculated price shows the desire to turn up, which means that the correction period for the euro is likely to end, and the chances for EUR/USD to move up and retest 1.20 are growing. In the short term, we expect growth to the range of 1.1900/20, after which the bullish direction of the pair will become more clear.

Based on market positioning, the pound looks noticeably weaker than the euro. The long position was reduced by 848 million almost to zero, there is no overweight in either direction on futures, and the target price continues to fluctuate near its long-term average without an obvious desire for a strong movement. 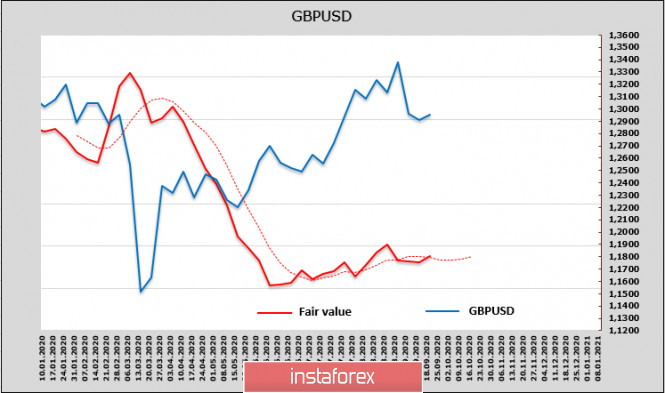 Investors did not completely gain new information from the Bank of England’s meeting, as there were no additional guidelines. In turn, macroeconomic data is generally neutral, retail sales growth in August by 0.8% is too little to hope for a rise in inflation, and political changes are more fearful than hopeful.

In Parliament, the opposition between Laborites and the Tories on the internal market bill continues, which led to the adoption of an amendment on the need to enlist the support of Parliament if the government is going to violate international obligations. This amendment will help to work out a solution in negotiations with the EU, but the chances of a hard Brexit are still regarded as very high.

Technically, the corrective growth from 1.2760 to 1.3000 seems to have ended. The pound is facing a rising probability of a second wave of decline, and only a weak dollar can prevent this. The most likely scenario is the formation of a local top in the 1.30 area and a movement to 1.2620/50 in the coming days, while a sideways range is slightly unlikely. So, the pound can only rise if there is a breakthrough news on Brexit, other than that, it has no reasons to grow.

Markets doubt that Biden’s stimulus measure will be fully adopted by...

Memphis Rapper Arrested After Bragging in Music Video About Scamming the...

Baltimore Is Teaming Up With Guinness To Launch New Diversity Beer...

This Event Planner Generated Over $2 Million In Sales For Black...

Lady Gaga: White People ‘Have a Responsibility to Unlearn’ Racism and...

Technical analysis recommendations for EUR/USD and GBP/USD on January, 18