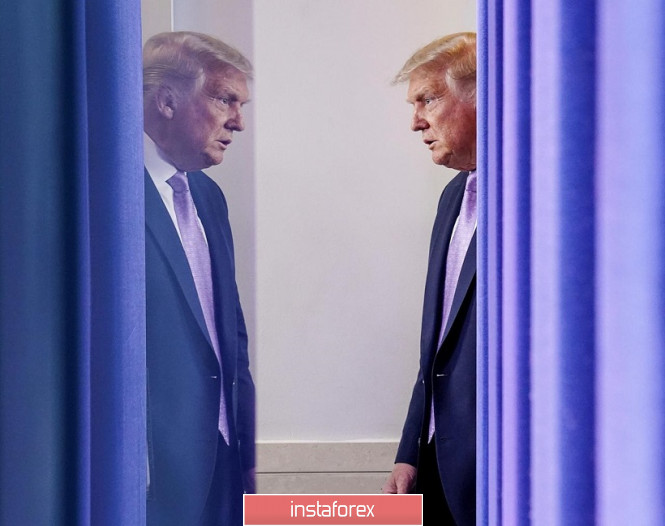 Today the EUR/USD pair tested the resistance level of 1.1940 – the upper line of the Bollinger Bands indicator on the daily chart. It cannot be said that this event was a big surprise: the clouds have been gathering over the American currency for a long time, so the next price spurt of EUR/USD looks quite natural. Buyers of the pair have not yet managed to overcome the resistance level and gain a foothold above it, but the “bid to win” is important here. The euro bulls once again demonstrated their dominance, not allowing the scales to tilt towards the south. And do not forget that at stake is the psychologically important 1.2000 mark, which will open the way for traders to the area of above 1.20. That is why there is such excitement around the resistance level of 1.1940: by and large, this is a price citadel of bears, breaking which the bulls can develop a large-scale bullish trend.

What is going on?

The dollar is weakening for many reasons, among which there are several main ones. As you know, American politicians have been trying for several months to agree on a bill on the allocation of additional assistance to the US economy. Initially, Congressmen rejected the $ 3 trillion Democrats’ project. This document was able to pass in the Lower House of Congress (which is controlled by the Democratic Party), but they could not pass it through the Upper House (Senate), which is controlled by the Republicans. A little later, namely at the end of July, the White House submitted to Congress its version of the new stimulus package, which turned out to be much more modest (one trillion dollars).

But here a mirror situation occurred: the Republicans need the votes of the Democrats who refused to make serious concessions to their opponents, especially on the eve of the presidential elections scheduled for November.

In early August, White House economic adviser Larry Kudlow announced that talks on a stimulus package were “deadlocked.” Since then, the dollar index has been gradually sliding down, despite rising inflation and a recovery in the US labor market. Macroeconomic reports have faded into the background, but the political battles within the triangle “Democrats – Republicans – White House” attract the attention of traders.

Last week, US Treasury Secretary Stephen Mnuchin said that negotiations in Congress could be resumed “in the near future”, and the parties are ready to make mutual concessions. Democratic representatives indirectly confirmed the minister’s words, saying that they are ready to revise the expenditure side of the bill, reducing its volume to two trillion. And although many experts doubted that the negotiations would end successfully, everyone agreed that additional stimulus was needed for the American economy.

That is why today’s comments from a White House spokesman acted as a trigger, putting the strongest pressure on the dollar. A representative of the Trump Council of Economic Advisers in an interview with one of the TV channels actually denied the words of the Treasury Secretary, saying that the President still insists on the adoption of the bill in its original form. However, he categorically rejected the idea of increasing its volume to two trillion dollars.

This means that the political confrontation between the Democrats and the White House continues, and the bill on the new stimulus package will remain a draft – at least for the foreseeable future. 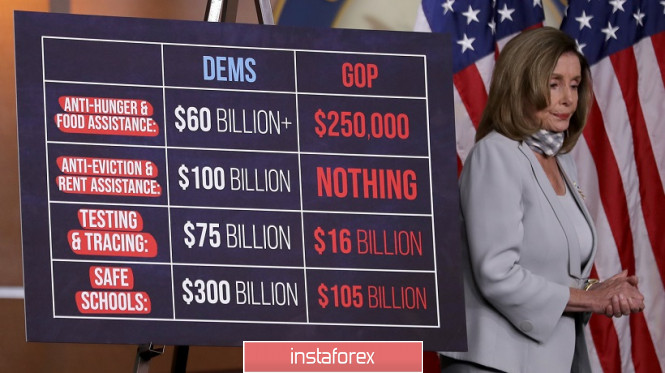 The American currency was already under pressure, amid the strengthening of anti-Chinese rhetoric on the part of Trump and the strengthening of the political positions of Trump himself in the key states of the country (if earlier the head of the White House lagged behind Democrat Joe Biden by 14-15%, then according to the latest data, the gap is 1-2%). But today’s events have finally knocked down the dollar bulls: this allowed the euro bulls to overcome the intermediate resistance level of 1.1900 and test the main resistance level of 1.1940. Interestingly, the market neglected the strong data released today on the construction sector: the volume of new housing construction in the US jumped 22.6% in July.

But the market remained indifferent to these figures. All this suggests that the EUR/USD pair will remain at the mercy of political jitters that put pressure on the greenback.

Such impulse movements are usually followed by a downward correction. In this case, the price may roll back to the base of 1.9. The 1.1900 mark now acts as a support level. If the pair does not pull back below this target, it will be possible to consider buying, with the first target at 1.1940 (the upper line of the Bollinger Bands indicator on the daily chart) and further to the borders of 1.2. If buyers manage to gain a foothold above 1.1940 today, thus making a “blitzkrieg”, then in this case, long deals to the key level of 1.2000 can be considered.

The Bank of England is supporting the growth of the pound....

Technical Analysis of EUR/USD for November 18, 2020

Overview of the EUR/USD pair. January 22. The euro currency shows...

Forecast and trading signals for EUR/USD on January 20. COT report....

Overview of the GBP/USD pair. December 1. The pound continues to...