Donald Trump’s last battle ended with a temporary occupation of the Capitol, but it did not expectedly lead to serious consequences. There was a minimal impact on the market, despite quite chaotic footage from the Capitol. Moreover, no one believes that Trump will be able to prevent Joe Biden from taking an oath. Congress, in turn, resumed the counting of electoral votes after taking a short break.

A Democratic victory in the Senate election in Georgia means the implementation of the “blue wave” scenario, with Democrats controlling both houses of Congress. The development of the situation increases the probability of further easing of fiscal policy in the near future. However, this means further decline for the dollar.

The end of the US political tension means a green signal for markets to continue growing. Low tensions will boost demand for raw materials, emerging market currencies and other risky assets.

On another note, the FOMC minutes did not provide any significant new information. All FOMC members supported the current pace of bond purchases ($ 80 billion in Treasury bonds and $ 40 billion MBS per month), while some hinted that the eventual reduction should be the same as it was after the financial crisis. The Fed also seems happy with its new forward-looking quantitative easing policy and will not strengthen it further by tying it to a specific number or target.

ISM indexes in the service sector will be published today. On Friday, all the attention will be focused on the labor market report. Despite the importance of these reports, their impact on the market will be limited, since it is clear that others will follow the initial political goal of the Democratic party, particularly the intention to provide $ 2 thousand each to combat the pandemic.

Prices of dairy products increased by 3.9%. Such a stable growth has been observed for almost 2 months, while the price index is the highest since December 2019, that is, it exceeded the pre-pandemic level.

According to ANZ Bank’s December business review, the rise in dairy prices is an indirect indicator of growing inflationary pressures. ANZ noted that 35.1 of the respondents who took part in the survey expressed an intention to raise selling prices, and this was the highest level of intentions since 2010. As we can see, the dynamics of dairy prices corresponds to higher inflation expectations.

The estimated fair price for NZD is still higher than the long-term average. Financial flows are in favor of the New Zealand dollar. 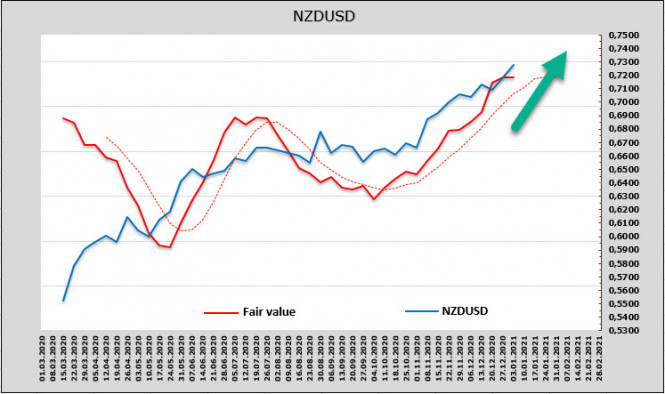 There are no fundamental reasons for a downward reversal yet, as leaving the holidays turns out to be quite prolonged. There are no significant macroeconomic publications and the RBNZ position on reassessing inflationary expectations and possibly, on making changes in monetary policy, is unknown.

The target is still 0.7500, however, there is a rising probability of a technical correction. If it happens, a pullback can be expected to the zone of 0.6900/50, but there should be reasons for the US dollar’s sharp strengthening, which seems to be unlikely right now. This means that the main scenario remains unchanged – further growth to the resistance level of 0.75.

The Australian dollar is enjoying a good market environment and continues to strongly rise, supported by the price growth of oil and metals. Despite the fact that the first CFTC report this year showed a slight increase in the net short speculative position in Australian dollar, exporters also actively increased their short position in this currency.

Unlike speculators, this has exactly the opposite sense, since exporters hedge risks in this way, by laying it down in advance for future premium payments, but hoping to get more profit from export operations. In other words, the dynamics in the futures market indicate that the major players are waiting for the AUD to continue growing. 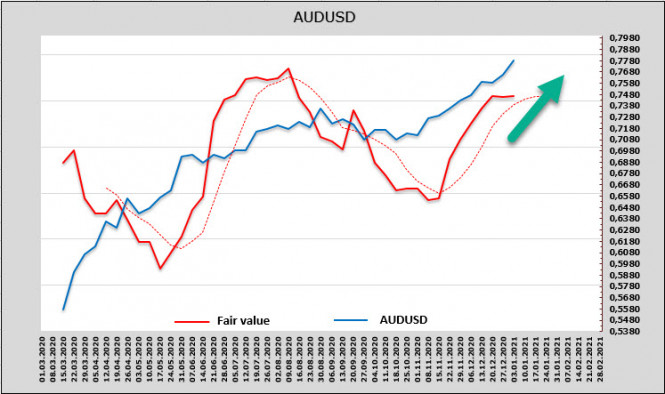 The December PMI in the service sector and industry was slightly worse than the November PMI, but overall showed strong growth – 57.0 and 55.7, respectively. There are almost no fundamental reasons for the reversal. The targets are still the previous 0.8110/20 and further 0.83 and the momentum is still strong. For a technical correction, the market needs to see a reason for the growth of panic moods, but the market does not see such reasons at the moment.

Fix for critical Qualcomm chip flaw is making its way to...

Overview of the GBP/USD pair. December 3. London and Brussels are...

Coronation Street star Brooke Vincent has given birth to her second...