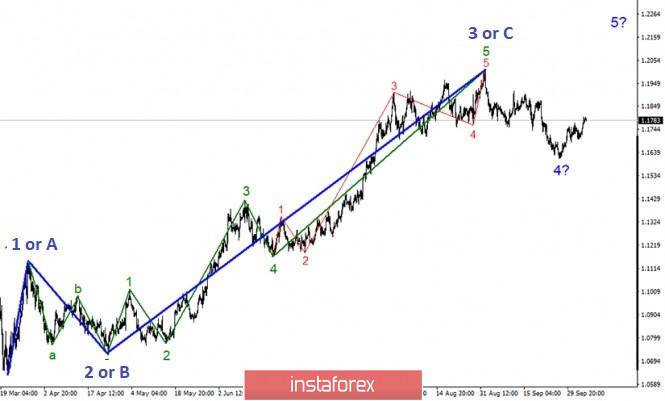 The wave marking of the EUR/USD instrument still looks quite convincing and wave 4 is complete. If this assumption is correct, then the increase in quotes will continue from the current levels within the construction of wave 5 with goals located above the maximum of the expected wave 4. This means that the instrument will rise to at least 20 figures thought it will most likely go even higher. There is no talk of complicating the downward wave 4 right now. 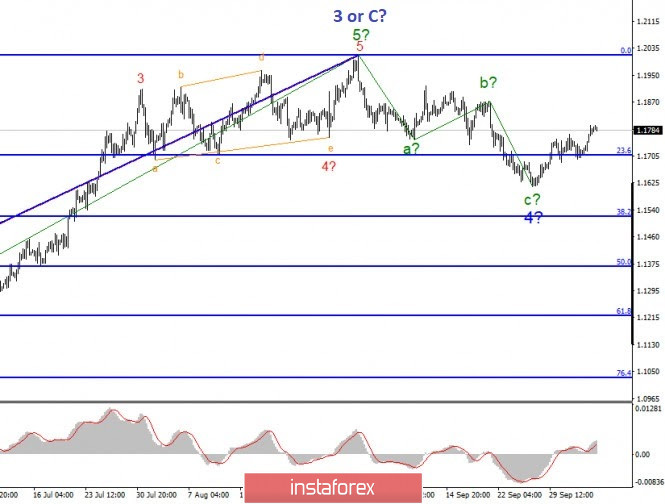 A smaller scale wave layout shows that three smaller-order waves were built inside the assumed wave 4, therefore this wave has completed its construction. Over the past day, the instrument has gained about 70 base points and continues to build the expected wave 5, which should take a pronounced five-wave form.

On Monday, the EUR/USD instrument continued to rise, although there were minimal important economic reports that day. Business activity indices in the EU and the US did not seem to be taken seriously by the markets. However, I note that business activity in the German service sector has returned to the area above the 50 mark, while in the European Union it has remained below this mark. In America, this indicator was the strongest: -57.8 points. However, the index did not cause selling of the Euro and the Dollar. The only report that pleased the markets was retail sales in the Euro area, which exceeded expectations. However, attention yesterday– and tonight– was focused again on Donald Trump. He revealed days ago that he contracted the Coronavirus and was discharged from the hospital tonight. Before being discharged, Trump wrote on Twitter: “I will leave Walter reed medical center today at 6:30 p.m. I feel really good! Don’t be afraid of COVID! Don’t let it dominate your life. Under my administration, we have developed a really great medication. I feel better than I did 20 years ago!” I suspect that he is using another populist strategy designed to calm the American population before the presidential election and against the background of continuing high rates of disease in the country (about 40,000 cases daily). Is Donald trump trying to show that the disease is not terrible, so that more voters will vote for him in the elections? Or is it more serious than we are aware of and that he will continue treatment in the White House? Moreover, while Trump is in the hospital, he continues to make posts to his Twitter account, all in caps lock for some reason and dedicated to confronting Joe Biden and the Democrats, as well as promoting himself. He acts as if he is not infected with the virus. One only has to remember how difficult Boris Johnson’s illness was.

The Euro-Dollar pair has presumably completed the construction of the correction wave 4. Thus, at this time, I recommend buying a tool with targets located near the calculated mark of 1.2012, which corresponds to 0.0% Fibonacci for each MACD signal up in the expectation of building a global wave 5.

Technical analysis of BTC/USD for January 28, 2021

Indicator analysis. Daily review for the EUR / USD pair on...

EURUSD slows down pace at the end of the week

GBP/USD. The EU is taking a calm stance and is waiting...

This Digital Advertising and Marketing Bundle Helps Your Get Ahead of...

Five Tools to Help Entrepreneurs Save Time and Increase Productivity

Why do people buy bitcoin despite its high price?