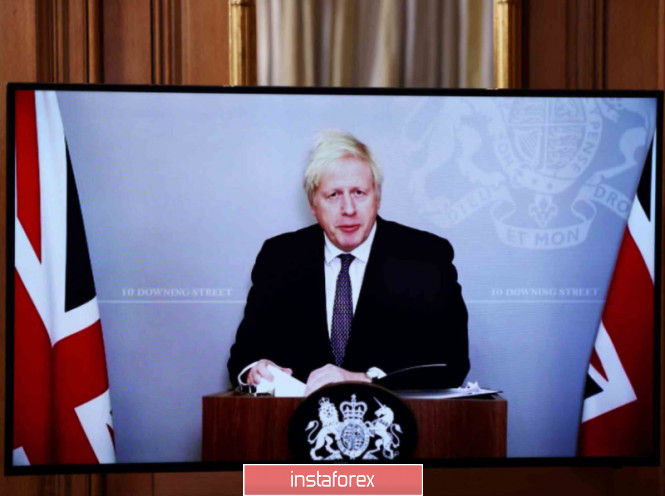 EUR/USD and GBP/USD: The dollar gained strength amid record growth in the US economy. UK to lift nearly all COVID-19 restrictions

It seems that incumbent US President, Donald Trump, is trying every way to retain his seat. Yesterday, he announced that he has sufficient evidence to prove that votes were rigged at the 2020 US elections, especially in the 4 states where, in his opinion, he should have won. He also asked why Joe Biden is in a hurry to form his cabinet when the people investigating the elections found so many fraudulent votes. And although his latest lawsuit was dismissed, Trump called on the courts to ensure the integrity of not only the country’s election procedures, but also the integrity of the United States itself.

As for Europe, things are not going well, especially since the latest economic reports say the bloc’s GDP will again decline due to lockdowns. Such limits the upward potential of risky assets, the growth of which could be observed in the morning.

As noted above, this despondent outlook is mainly because of the projected contraction of the EU economy against the background of lockdowns that now persist in many European countries due to the second wave of the coronavirus. Business and service sectors are currently in a downturn, which greatly affects the state of the EU economy.

But good news is that the manufacturing sector remains afloat, and economists expect that it will pull the EU economy at the end of this year. However, much will depend on whether the partial lockdown continues or not.

Meanwhile, in the UK, the government has decided to lift all restrictions on December 2. Prime Minister Boris Johnson confirmed yesterday that the national lockdown will end next week, and it will be replaced by a tougher three-tier system of regional restrictions, which will last until early next year. The essence of this new method is that areas with highest incident rates will undergo regular checks, and people who have been in contact with carriers of COVID-19 will be able to avoid quarantine, but they will have to be tested every day for seven days in a row. The program will be tested first in Liverpool, and its effectiveness will determine the further steps of the UK government in the fight against coronavirus.

As per the new rules, from December 2, shops, hairdressers and gyms will start functioning as usual. In regions where infections are high, bars and restaurants will only sell takeaway food.

On the topic of statistics, the IHS Markit reported yesterday that composite PMI in the euro area, which includes the services and manufacturing sectors, have declined, falling from 50.0 points to 45.1 points in November. An index value above 50.0 indicates an increase in activity, thus, in this regard, it is expected that the eurozone’s GDP in the 4th quarter may contract immediately by 3%. The only thing that the EU can count on is the coronavirus vaccine, which may become available early next year.

As for the composite PMI of the US, a sharp increase was observed, even though COVID-19 incidence in the country has jumped to a fairly high level. The index came out at 57.9 points in November, from 56.3 points in October. Even more surprising was the fact that not only the manufacturing sector was growing, but also the service sector, which is most at risk of contraction amid the coronavirus pandemic. This strong rise in performance reflects further strengthening in demand, which in turn is prompting companies to hire workers.

According to the report, preliminary service PMI rose to 57.7 points in November, while economists had expected the index to be 55.0 points. The manufacturing PMI, on the other hand, rose immediately to 56.7 points, much higher than the expected 53.0 points. It seems that the recent good news about the COVID-19 vaccine gave a positive impact on sentiment, leading to increased optimism.

Economic activity in the Chicago Fed also grew positively as expected. The latest report said the index of national activity came out 0.83 points against 0.32 points in September, while economists had expected it to only reach 0.23 points.

Recent data suggests that the UK economy will contract less larger than expected in the 4th quarter, mainly due to the UK being able to handle the current lockdown better than expected. The report published by the IHS Markit said the composite PMI of the country this November was much better than forecasted, coming out at 47.4 points against 52.1 points in October. In this regard, the UK GDP is projected to contract by only about 2% in November, against the latest forecast of 8%.

With regards to the technical picture of the GBP/USD pair, the bulls are still aiming at the resistance level of 1.3390, as a breakout of which will bring the quote towards the highs 1.3470 and 1.3530. But if the pressure on the pound returns, the quote is expected to decline below the support level of 1.3250, and such which will quickly push the GBP/USD pair to the lows 1.3170 and 1.3100.

Technical analysis on EUR/USD pair for the month of October

Alibaba shares tumbled despite an increase in buyback to $ 10...