EUR/USD and GBP/USD: The euro and the pound needs clarity over post-Brexit trade deal. Inflationary pressures in the UK could

The direction of the euro and the pound now lies in the trade agreement between the UK and the EU, negotiations on which are again deadlocked. The absence of news clearly indicates the lack of progress, which in turn suggests that the Brexit transition will end without a trade deal. Only real concessions from one of the parties on the issue of fishing will move everything off the ground. In the meantime, traders can only count on the resumption of growth in the euro and pound before the end of the year. Another undoubted plus will be the holding of the second round of elections in Georgia, where the Democrats can already get a majority in the US Senate, which is a completely different prospect for the new US president, Joe Biden.

Of greater interest are disagreements over the EU budget and the general recovery fund, because at the beginning of this week, Hungary and Poland blocked the coordination of financial support measures. However, this did not exert much pressure on the markets, since everyone understands that this is only a temporary blockage, since it is unlikely that these two countries will agree to give up the financial supports that await them if these two directions are agreed.

In another note, quite recently, it became known that millions of Americans may be left without money early next year, when the term for the payment of the unemployment benefits expires. The validity of the two programs the US Congress adopted early this year ends on December 31, which could create real problems for those who will be left without additional payments in the midst of the coronavirus pandemic in the United States.

However, yesterday, there was an expert opinion that the expiration of these programs are unlikely to hit the income of the unemployed, mainly because there are unusually high savings rates, which were generated during social distancing measures and travel restrictions. Therefore, even the abolition of additional payments is unlikely to significantly affect the costs of Americans, especially given the fact that the economy may again be subjected to a partial lockdown. The latest figures of COVID-19 infections in the US speak for themselves.

With regards to economic data, the statistics in the US real estate market remain at a fairly high level, and this is indicated by the report published by the US Department of Commerce yesterday. According to the data, the pace of construction in the US continued to grow in October, thus, the number of new home starts increased by 4.9% and amounted to 1.53 million units per year. Economists had expected this number to grow by 2.5% and amount to 1.45 million a year. As for the number of building permits, the figure in October remained unchanged and amounted to 1.545 million units, while economists had forecasted a growth of 0.5%, to 1.56 million units per year.

Fed representatives also delivered a number of statements, for example, John Williams said that fiscal support is now extremely important for the economy, as the lack of new measures will slow down its recovery. Williams also believes that the news about the vaccine is encouraging for the future, but the Fed plans to continue to use all available tools to help the economy grow. On the longer term, Williams is more optimistic as he expects a real economic recovery to come sooner than expected.

As for the movement of the EUR/USD pair, further growth will depend on whether the bulls will be able to break above the base of the 19th figure, because just when the quote approached this level, yesterday’s bullish momentum slowed sharply, which indicates the presence of a static seller. Only a breakout of this range will trigger a strong rise towards 1.1930 and 1.1970, but the main will be the psychological mark in the area of the 20th figure. In a scenario of negative Brexit news, and in the case of a breakout from 1.1845, the pair will quickly fall to the base of the 18th figure, while the larger bears will try to push the euro to the level of 1.1745.

Yesterday’s data on inflation in the UK, which indicated a more stable position than economists expected, led to a slight increase in the pound in the morning, however, the lack of news on Brexit has a negative impact on the pound, which has grown recently only in anticipation of progress.

But back to inflation indicators, following yesterday’s report, some economists said that consumer price inflation in the UK will start to accelerate from the 2nd quarter of 2021, wherein after the preferential VAT rate ends next year, the figure could reach 2.0% by the end of 2021. The recovery of the UK economy, which is gradually gaining momentum, will also have a positive effect on the indicator. If a Brexit trade agreement is signed, it will only spur inflationary pressures. 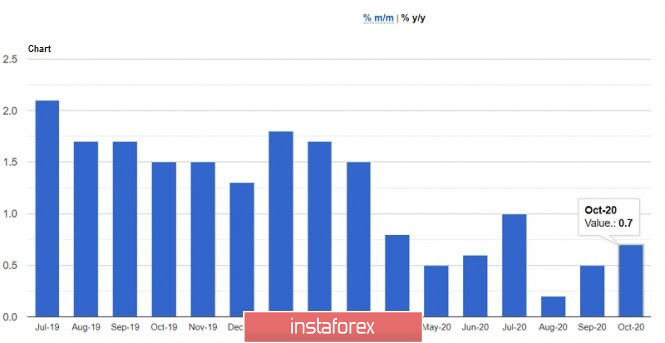 But if inflation remains at a sufficiently low level, and this may happen due to a longer lockdown of the British economy, it is possible that the Bank of England will intervene, which will resort to further easing of policy. Bank of England Governor, Andrew Bailey, has repeatedly drawn attention to this. Again, a lot will depend on the Brexit trade agreement, in which its absence will lead to the introduction of negative interest rates.

Anyhow, yesterday’s report revealed that CPI in the UK remained unchanged in October, while many economists predicted its decline by 0.1%. Interestingly, annual inflation was much better than forecasted. A report from the UK National Bureau of Statistics indicated that consumer prices rose 0.7% this October, as compared to the same period last year. Economists had expected it to rise by 0.5%.

As for the technical picture of the GBP/USD pair, any good news on Brexit will certainly spur demand for the pound, which is being held back by the resistance at 1.3310. A break of this range would trigger a strong upward move towards 1.3380 and 1.3470, but if the quote declines below the level of 1.3235, which buyers are now trying to save by all means, the pound may head towards the level of 1.3165, and then towards the base of the 31st figure.

Overview of the EUR/USD pair. October 7. Is Trump really sick?...

Ryanair and the Covid Crisis

Hot forecast and trading signals for GBP/USD on November 4. COT...

Overview of the GBP/USD pair. September 17. Britain, led by Boris...

Why is animal welfare important to G Adventures?

EUR/USD analysis on January 21. What actions can and should the...