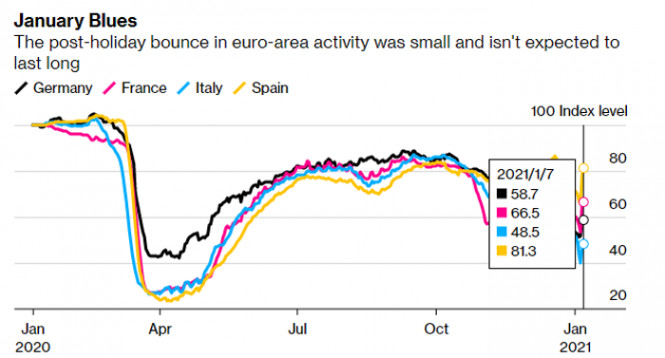 EUR/USD and GBP/USD: There is a high chance that the EU will slide into recession. As a result, the upward potential for

Maintaining the lockdowns, even in partial forms, will put serious pressure on many sectors, which could lead to a downturn in the EU economy.

In that regard, recent forecasts were revised downwards. For instance, JPMorgan and UBS said the EU has a dim outlook due to persistent outbreaks and new strain of coronavirus.

And even if the downturn turns out not as deep as expected, it will still increase pressure on indebted governments, as well as on the European Central Bank, which must be proactive.

This is another reason why the European currency will remain under pressure. Next week, the ECB will meet to discuss its monetary policy and decide on additional financial support to countries.

In any case, the EU economy is projected to shrink in the first quarter of 2021.

JPMorgan expects a contraction of about 1%, while UBS predicts a 0.4% drop. Goldman Sachs, meanwhile, said they forecast a small reduction with great uncertainty and risks.

Given all these forecasts, it is not surprising that investor confidence, although showed growth in January, was lower than expected. The data released by Sentix said investor sentiment rose to 1.3 points in January, from -2.7 points in December. This is the first increase since February 2020, when the COVID-19 pandemic began to spread around the world. Meanwhile, the current situation index (CSI) remained at a negative level (-26.5 points), while the index of expectations rose to a record level of 33.5 points.

However, there is no need to rush to buy the euro, as there are serious risks of another decline in indicators. Aside from that, the above data are tentative, and the real picture will be visible only after the restrictions have been completely removed.

As for other economic reports, industrial production in Spain declined at a faster pace in November 2020 due to weak energy and capital goods production. INE said it dropped by 3.8% compared to last year, after falling by 1.6% in October.

Demand for the British pound started to increase again, after dropping sharply due to weak report on UK retail sales. According to the British Retail Consortium, total retail sales fell 0.3% in 2020, the worst annual change since 1995. Sales of food products rose 5.4%, while sales of non-food items fell 5%.

But overall, retail sales rose 4.8% in December, after jumping by 7.7% in November. The most common purchases are household goods and food, while demand for fashion products, accessories and cosmetics was weak.

Hot forecast and trading signals for GBP/USD on November 4. COT...

EUR/USD: plan for the European session on December 24. COT reports....

10 Toughest Houseplants You an grow indoors!

Overview of the EUR/USD pair. December 29. The US Congress can...