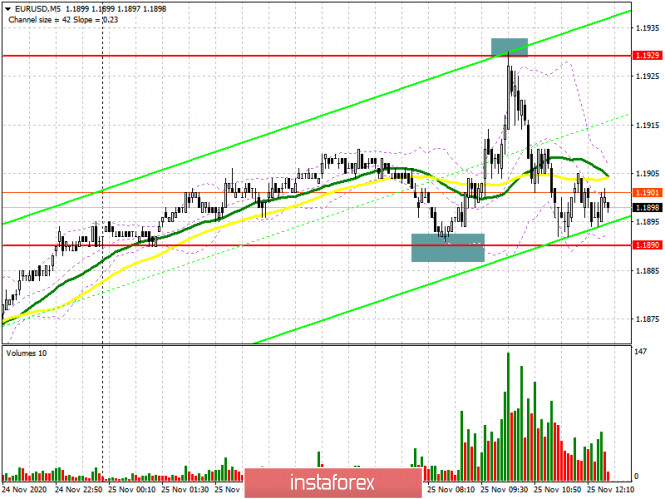 EUR/USD: plan for the American session on November 25 (analysis of morning deals)

In my morning forecast, I paid attention to purchases from the level of 1.1890, as well as sales after the resistance update of 1.1929. Let’s take a look at the 5-minute chart and talk about what happened and where you could earn money. In the absence of important fundamental statistics, the bulls made another attempt to increase the euro, and the test of the level of 1.1890 led to the formation of a buy signal. The goal of the movement was the resistance of 1.1929, from where it was possible to open short positions. To be fair, I personally expected a false breakout to form at this level and did not open short positions at the first update of the level of 1.1929.

As a result of all the movements, the technical picture remained completely unchanged. The entire focus in the second half of the day will be shifted to a fairly large number of fundamental statistics on the American economy. Today, important US GDP reports and Federal Reserve minutes are published, which may lead to a slight strengthening of the dollar. If the data turns out to be worse than economists’ forecasts, and we are also interested in the income and expenses of Americans, then the demand for the euro will only increase. Only another false breakout formation around 1.1890 in the afternoon will form a new entry point for long positions. In this case, the next target for buyers will be the same high of 1.1929, from which the pair quickly bounced down today. The longer-term target is the resistance at 1.1964, where I recommend taking the profit. In the scenario of a decline in EUR/USD back to the area of 1.1890 in the second half of the day and the lack of bull activity at this level, I recommend that you do not rush to buy but wait for a downward correction to the area of yesterday’s support of 1.1844, from where you can buy euros today immediately for a rebound based on an upward correction of 15-20 points. A larger support level is seen only at this week’s low in the area of 1.1802, where you can also buy euros immediately on the first test.

The initial task of sellers is to return to the level of 1.1890, which they failed to recapture in the first half of the day. Only a consolidation below 1.1890 and its test from the reverse side from the bottom up form a more convenient entry point for short positions in the expectation of a resumption of the downward trend. In this case, the nearest target of the bears will be a minimum of 1.1844, from which yesterday it was possible to observe the active growth of the pair. However, an update to this level will only be an indication that trading remains in the side channel. Only a breakdown and consolidation below this range will lead EUR/USD to the area of weekly lows of 1.1802, where I recommend fixing the profits. If the bulls turn out to be, and the data on the US economy disappoints traders, then it is best not to rush with sales, but wait for the next update of the resistance at 1.1929, where only the formation of a false breakdown will signal the opening of short positions in the euro. I recommend selling EUR/USD immediately for a rebound only from the maximum of 1.1964, based on a correction of 15-20 points within the day. 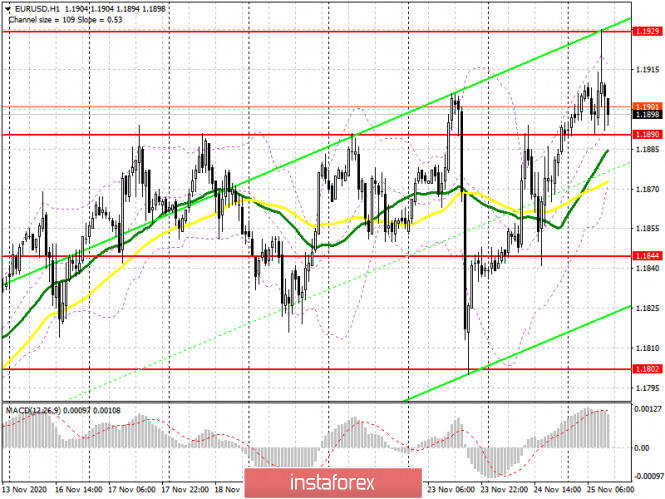 Let me remind you that the COT report (Commitment of Traders) for November 17 recorded an increase in long and short positions. So, long non-commercial positions increased from the level 202,374 to the level of 203,551, while non-commercial short positions increased from 69,591 to the level of 67,087. The total non-commercial net position fell to 133,960, down from 135,287 weeks earlier. It is worth noting that the delta has been declining for 8 consecutive weeks, which confirms the lack of desire of euro buyers to go to the market in the current conditions. It will be possible to talk about a further recovery of the euro only after European leaders “settle” their differences with Poland and Hungary, and the UK agrees with Brussels on a new trade agreement. Otherwise, we will have to wait for the lifting of restrictive measures imposed due to the second wave of coronavirus in many EU countries.

Trading is conducted above 30 and 50 daily moving averages, which indicates an attempt by the bulls to continue pushing the market up.

A break of the upper limit of the indicator around 1.1920 will lead to new growth of the pair. If the euro declines, the lower border of the indicator in the area of 1.1875 will provide support.

Hope for incentives and vaccines has lifted Wall Street to new...

Howard University Receives $1 Million to Launch the Center for Women,...

Technical analysis of GBP/USD for January 11, 2021

Markets are consolidating while waiting for Biden’s inauguration and the start...

EUR/USD: plan for the European session on November 20. COT reports....