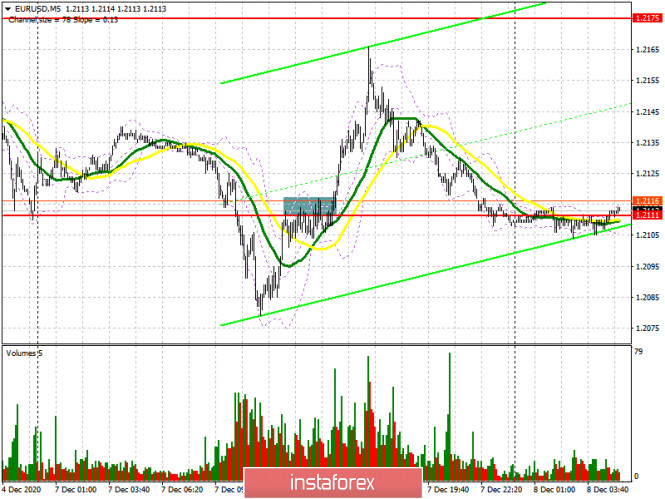 EUR/USD: plan for the European session on December 8. COT reports. Euro buyers did not reach new highs. Bullish trend on

In yesterday’s forecast, I drew attention to the 1.2111 level and said that as long as trading is conducted below this range, we can expect the euro to continue falling. I marked an area on the 5-minute chart where bears were actively defending their positions, forming false breakouts from the resistance at 1.2111, but this did not lead to anything good. As a result, the breakout and consolidation at 1.2111 caused EUR/USD to rise in the afternoon. Unfortunately, I did not wait until the 1.2111 level has been tested from top to bottom in order to produce a convenient entry point, so I missed this, as well as being able to sell in the morning.

I didn’t really review much at the moment. The 1.2111 level has slightly changed, which became 1.2116. I will focus on it in the morning. Buyers of the euro need to do their best to regain resistance at 1.2116, and they know how to do it. Yesterday’s breakdown of 1.2111 was proof of this. Testing this level from the bottom up after the breakout produces a good signal to open long positions. The main goal is to return to last week’s highs in the 1.2175 area, which has already been tested for strength twice. The fact that the bulls did not update this level yesterday jeopardizes the upward trend. Therefore, testing 1.2175 for the third time will lead to its breakout and EUR/USD will rise to highs of 1.2255 and 1.2339, where I recommend taking profit. In the absence of bullish activity in the 1.2116 area and we receive weak fundamental data from the ZEW institute for Germany and the eurozone, it is best not to rush into long deals, but wait until the 1.2046 low has been updated. You can buy the euro on a rebound from this level, counting on a correction of 20-25 points within the day. A larger support level is seen around 1.1986. Testing this low will lead to a reversal of the upward trend in the short term.

News that there is still a chance for a Brexit trade deal has made it possible for the bulls to regain their positions following a huge drop earlier in the day. At the moment, the pound sellers are focused on the 1.2116 level, which they need to protect. Forming a false breakout there in the first half of the day after receiving weak data on the index of business sentiment in Germany and the eurozone from the ZEW institute and the index of the current situation from the ZEW institute will be a signal to open short positions in sustaining the downward correction to the area of a low of 1.2046, where I recommend taking profit… Getting the pair to settle below this level and testing it from the bottom up will be a good signal to sell EUR/USD to the area of a large low at 1.1986, and the bears hope to be close to the support area of 1.1923, which will seriously affect the upward trend. If EUR/USD rises above the resistance of 1.2116, it is better not to rush to sell. In this scenario, you can only rely on short positions from the resistance of 1.2175, or sell EUR/USD from a new high of 1.2255, counting on a downward correction of 15-20 points within the day. 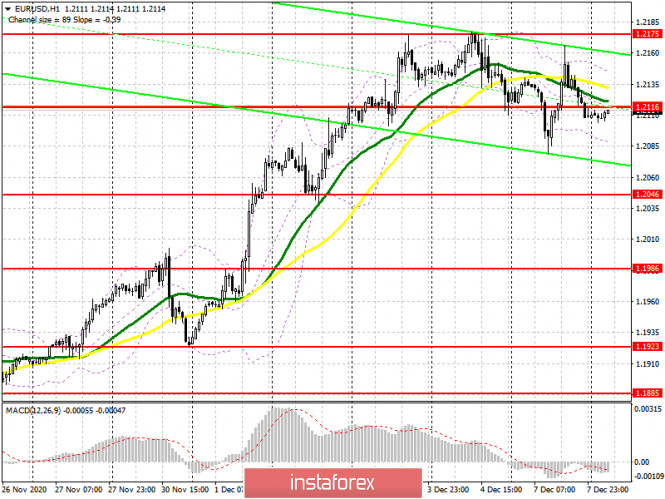 The Commitment of Traders (COT) report for December 1 showed an increase in long positions and a reduction in short positions. Buyers of risky assets believe that the bull market will continue and they also anticipate the euro’s growth, after going beyond the psychological mark in the area of the 20th figure. Thus, long non-commercial positions rose from 206,354 to 207,302, while short non-commercial positions fell to 67,407 from 68,104. The total non-commercial net position rose to 139,894 from 138,250 a week earlier. Take note of the delta’s growth after its 8-week decline, which indicates a clear advantage of buyers and a possible resumption of the medium-term upward trend for the euro. We can only talk about an even bigger recovery when European leaders have negotiated a new trade deal with Britain. However, we did not receive good news last week, and we have an EU summit ahead of us, which could put the final point in this story. News that restrictive measures will be lifted for the Christmas holidays can provide support to the euro, as well as the absence of major changes in the ECB’s monetary policy.

Trading is carried out in the area of 30 and 50 moving averages, which indicates the struggle of euro buyers to maintain control over the market.

Simplified wave analysis and forecast for GBP/USD, USD/JPY, and USD/CHF on...

Trading recommendations for GBP/USD on September 10

Disney Gives Disney + A Boost to Compete With Netflix And...

GBP/USD: plan for the European session on January 12. COT reports...

10 Hotels and Resorts in Tagaytay with Infinity Pool

GBP/USD. Donald Trump can be considered the worst president in the...

Hot forecast and trading signals for EUR/USD on October 12. Buyers...