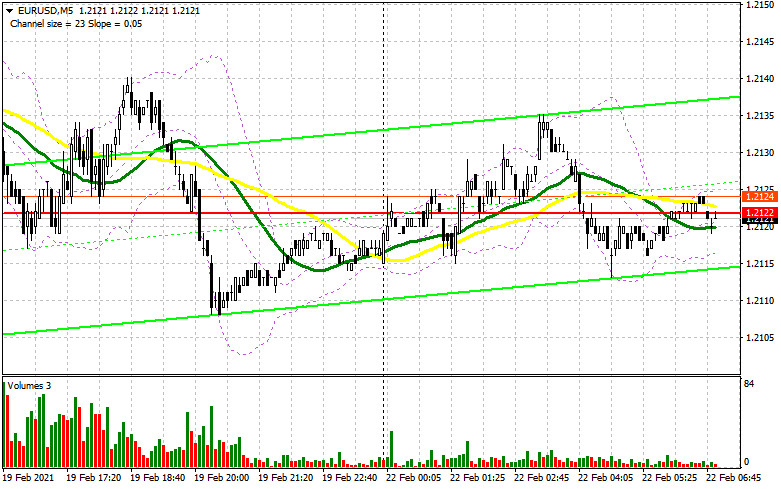 Last Friday I didn’t wait for the pair to return to 1.2122 level and update in the afternoon. The bears were not even that active in the 1.2122 area during the European session, which led to its breakdown and so the pair settled above it. However, we failed to wait for this level to be tested from top to bottom. As a result, I was forced to miss this signal. The pair returned to the 1.2122 area towards the end of the day, but buying from there before the market closes was not a good idea.

Bulls will be focused on surpassing resistance at 1.2133. This will happen on condition that we see good fundamental data for Germany from the Ifo Institute. Attention will be drawn to the IFO Business Environment Indicator, the IFO Current Situation Indicator and the IFO Economic Expectations Indicator. Good performance will help the bulls settle above 1.2133. Testing this level from top to bottom creates an excellent entry point into long positions in hopes to recover to a high of 1.2167, where I recommend taking profits. The 1.2194 level will be a distant target, updating it will create a new upward trend for the euro. In case the pair falls in the first half of the day, the bulls will focus on support at 1.2109. Forming a false breakout there creates a good entry point to buy. Moving averages, playing on the side of buyers, also pass there. A larger level can be seen in the area of 1.2082, but it is best to buy the euro from it as well, making sure that there is a major player in the market, and only a false breakout will tell us about this. Buy on the rebound only from the low of 1.2037.

The bears will look forward to regaining control over the 1.2109 level, but this requires a lot of work. Weak data on Germany can provide help, but the indicators are unlikely to be much worse than economists’ forecasts. A breakout and being able to test the 1.2109 area from the bottom up creates a good signal to open short positions in order to create a new bear market and return to the low of 1.2082, where I recommend taking profits. Surpassing 1.2082 will cancel out the bullish momentum and increase pressure on the euro. In this case, we can expect a test of the lows of 1.2037 and 1.2003. In the EUR/USD growth scenario, it is best to consider short positions if a false breakout is formed in the 1.2133 area. If bears are not active there, then it is best to postpone short positions until the month’s high is renewed in the 1.2167 area, from where one can expect a downward correction of 20-25 points within the day. 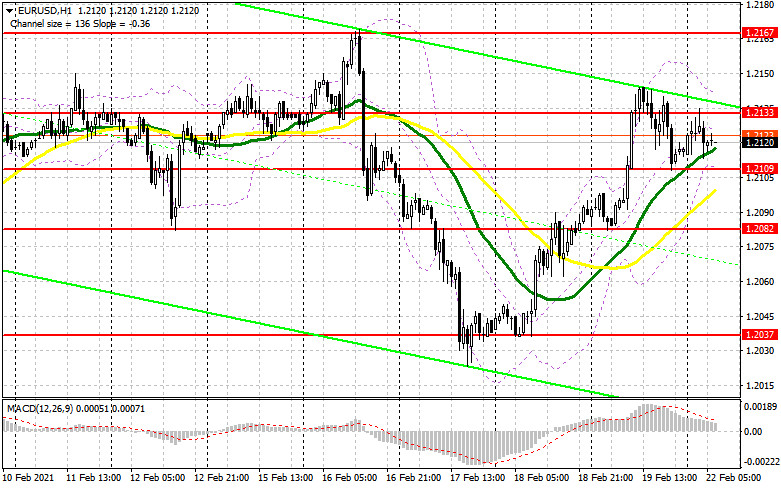 The Commitment of Traders (COT) report for February 9 revealed an increase in short and long positions, which reflects the current situation. The equality of buyers and sellers clearly characterizes the entirety of last week, which is where the pair was, in a horizontal channel. It is important to note that any adequate decline in the EUR/USD pair has always been accompanied by quick buys, and the fact that the US dollar continues to be less and less in demand among investors has already been mentioned many times. Therefore, I think a more correct approach to the market is to buy the euro. The only problem for the euro is the lack of guidance from the European Central Bank and the risk of verbal intervention, which limits the growth potential. However, the demand for the euro will only increase with each significant downward correction in the pair. The COT report indicated that long non-commercial positions rose from 216,887 to 220,943, while short non-commercial positions rose from 79,884 to 80,721. As a result, the total non-commercial net position rose after last week’s decline to 140,222 from 137,003. The weekly closing price was 1.2052 against 1.2067 a week earlier.

Trading is carried out above 30 and 50 moving averages, which indicates the bulls’ attempt to seize the initiative.

Note: The period and prices of moving averages are considered by the author on the H1 chart and differs from the general definition of the classic daily moving averages on the D1 daily chart.

A breakout of the upper border of the indicator in the 1.2133 area will lead to a new wave of growth for the euro. A break of the lower border at 1.2109 will increase pressure on the euro.

BTC analysis for February 25,.2021 – Potential completion of the upside...

How a Loan Fund Helped a St. Louis Entrepreneur Transform and...

EUR/USD. Preview of the new week. The bulls will continue to...

Hard-coded key vulnerability in Logix PLCs has severity score of 10...