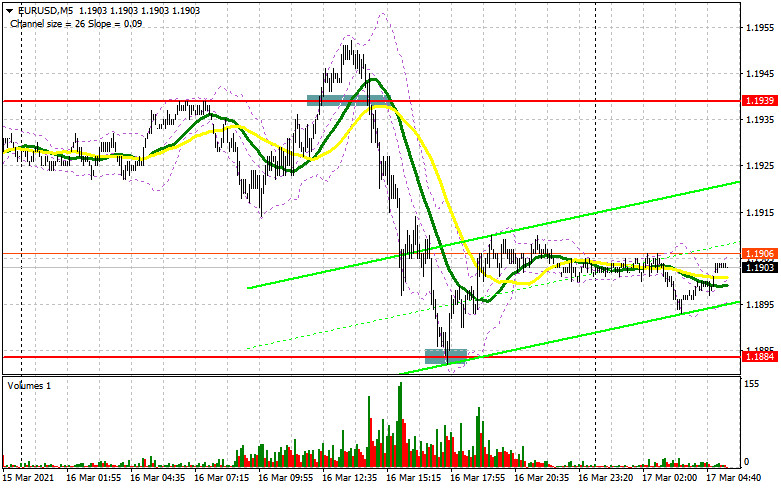 There are clearly less of those who are willing to buy than sell the euro. Let’s take a look at the 5-minute chart and talk about what happened. Yesterday afternoon, euro buyers tried to rise above resistance at 1.1939, using good fundamental reports on the European economy – but this was not enough. Once the 1.1939 level was tested from top to bottom, it was surpassed and a buy signal was not generated. It was only possible to take advantage of a false breakout in the 1.1884 area and enter the market expecting a 20-point correction when the euro actively fell during the US session.

Today everything will be tied to the Federal Reserve’s decision on monetary policy. Therefore, the eurozone inflation report, which is expected in the first half of the day, is unlikely to lead to a serious surge in volatility. And although the market is under the control of sellers, it is not worth writing off euro buyers from their accounts. Most likely, Fed Chairman Jerome Powell will not make any changes to the US central bank’s policy, which may lead to another rise in bond yields and the renewal of the trend towards strengthening the dollar. We can only speak about the bulls regaining control of the market after forming a breakout and the top-down test of resistance at 1.1939. A good signal for opening long positions can be created at this level, for the purpose of bringing back the bull market. Moving averages, playing on the side of sellers, are just below this level. If the eurozone inflation report turns out to be surprising and is better than economists’ forecasts, then you can count on a sharper growth and EUR/USD can return to last week’s high in the 1.1989 area, where I recommend taking profit. If the bulls are not active in the 1.1939 area, or the euro is under pressure in the first half of the day, then it would be best to postpone long positions until a false breakout forms in the 1.1884 support area (I analyzed a similar entry point a little higher). I recommend buying EUR/USD immediately on a rebound only from the low of 1.1838, relying on an upward correction of 20-25 points within the day. The next major level is seen in the 1.1804 area.

Bears need to be more proactive, as the upcoming Fed meeting may be a reason to sell the euro. Returning to the area below the 1.1884 level creates a signal for opening short positions. But before selling the euro below 1.1884, I recommend waiting for this area to be tested from the bottom up. A disappointing report on inflation in the eurozone may weigh on the euro in the first half of the day, so after a breakthrough of support at 1.1884, we can count on the renewal of the low at 1.1838, where I recommend taking profit. The next major support area is seen around 1.1803. If the euro grows in the first half of the day, then I recommend not to rush to sell: forming a false breakout in the resistance area of 1.1939 will result in creating the first signal to open short positions. In the absence of activity at this level, it is best to postpone short positions until resistance at 1.1989 has been tested, from which you can open short positions in euros immediately on a rebound, counting on a downward correction down by 25-30 points within the day. 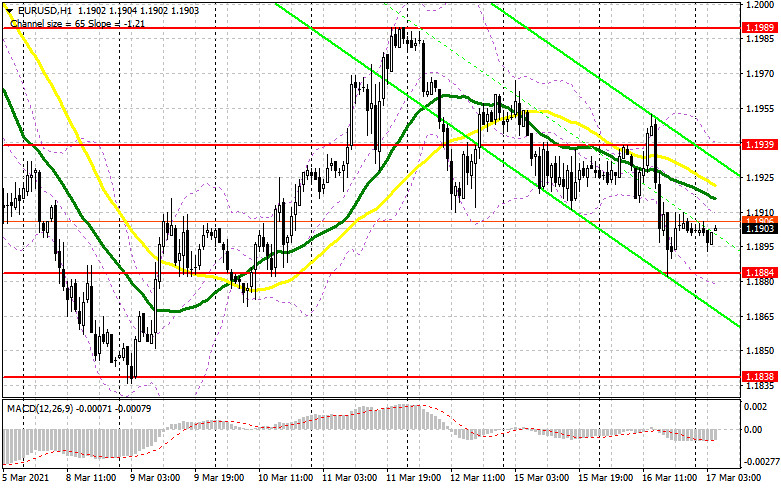 The Commitment of Traders (COT) report for March 9 clearly shows a sharp decline in long positions and a very large increase in short positions, which indicates a continued shift in the market towards sellers of risky assets. This is confirmed by the euro’s decline, which we have seen since the end of February. Bond yields in many developed countries continue to sharply rise, which plays in favor of the dollar, as investors expect the United States to be the first to start raising interest rates, which makes the greenback more attractive. The European Central Bank’s recent meeting did not change the market, as the decisions made were not critical and did not affect investor sentiment in any way. It is best not to rush into euro purchases, but to wait for lower prices. The growth in the incidence of coronavirus is another factor of medium-term pressure on the euro. The slow vaccination program for the population is pushing the cancellation of quarantine measures to a later date. We can only expect an improvement in the economic outlook for the eurozone once restrictions are lifted and the service sector is restored, which will return the medium-term trend to strengthening EUR/USD. The COT report indicated that long non-commercial positions declined from 222,655 to 207,588, while short non-commercial positions rose from 96,667 to 105,624. As a result, the total non-commercial net position declined again for the fourth consecutive week, from 125,988 to 101,964. The weekly closing price was 1.1812 against 1.2048 a week earlier.

Trading is carried out below 30 and 50 moving averages, which indicates the bears’ attempt to resume the downward trend.

Note: The period and prices of moving averages are considered by the author on the H1 chart and differs from the general definition of the classic daily moving averages on the D1 daily chart.

EUR/USD: dollar on the march, while the market figures out what...

Is Gold already halfway toward $4000?

Kate Garraway reveals Prince William said he could relate to her...

Overview of the GBP/USD pair. November 18. What are the chances...