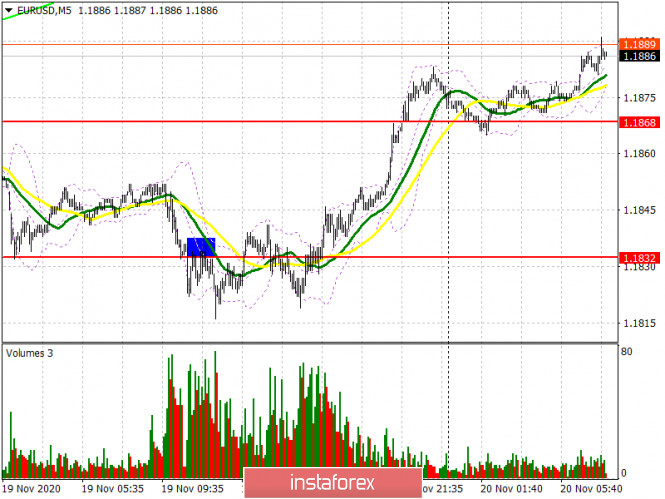 EUR/USD: plan for the European session on November 20. COT reports. Euro will fall, bears aim for 1.1832

Yesterday, we could not wait for some kind of adequate signal to appear in order to enter the market, since trading was mainly conducted around the 1.1832 level and it has now undergone some changes. The euro grew in the afternoon, right after the release of a weak report on the US labor market, which went even beyond the forecasts of economists, thereby putting pressure on the US dollar.

Now the bears are aiming for a monthly high of 1.1915, but it will be difficult to break above this range. Today’s absence of important fundamental statistics may keep the pair in the horizontal channel. Therefore, the primary task is to protect support at 1.1864, below which the moving averages pass, playing on the side of the bulls. Forming a false breakout there forms a good entry point for long deals, in hopes to return and update resistance at 1.1915. Being able to settle above this range will open a direct road to the highs of 1.1964 and 1.2008, where I recommend taking profits. If it is not active in the 1.1864 area, and trading moves below this range, it is better not to rush to buy, but wait until a larger low of 1.1821 has been updated, where the market reversed yesterday. However, it is best to open long positions from it if a false breakout is formed. It is possible to buy EUR/USD immediately on a rebound only at a low of 1.1762, counting on a correction of 15-20 points within the day.

The initial challenge for sellers is to regain control of the 1.1864 level, which they missed yesterday afternoon. Being able to settle below this range and testing it from the bottom up produces a more convenient entry point to short positions in hopes of bringing back the downward trend. In this case, the 1.1821 level will be the nearest goal, which appeared yesterday afternoon. We can only say that sellers have complete control of the market when we have settled below 1.1821, which will lead to an instant sale of the euro to the area of a low of 1.1762, where I recommend taking profit. In case the euro grows further, especially after the speech of European Central Bank President Christine Lagarde, the bears will have to try very hard to protect resistance at 1.1915. Forming a false breakout there will be a signal to open short positions. I recommend selling EUR/USD immediately on a rebound from the high of 1.1964, counting on a downward correction of 15-20 points within the day. 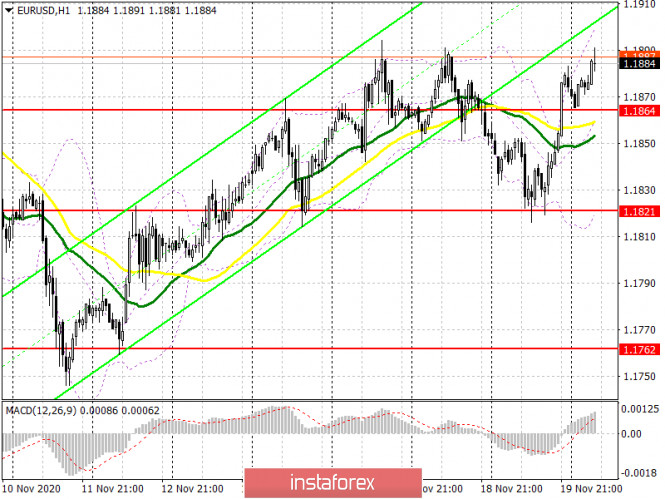 The Commitment of Traders (COT) report for November 10 showed a reduction in long and short positions. Euro bulls are holding on to a wait-and-see attitude and are in no hurry to return to the market even after the US presidential elections. Despite this, buyers of risky assets believe that the bull market will continue, although they prefer to proceed with caution. Thus, long non-commercial positions decreased from 208,237 to 202,374, while short non-commercial positions remained practically unchanged, falling from 67,888 to 67,087. The total non-commercial net position decreased to 135,287 against 140,349 a week earlier. It is worth noting that the delta has been declining for seven consecutive weeks, which confirms the buyers’ lack of desire to enter the market in the current conditions. Growth will only begin after Joe Biden’s victory and once his plan is implemented, as he intends to endow the American economy with the next largest monetary aid package worth more than $2 trillion.

Trading is carried out just above 30 and 50 moving averages, which indicates the likelihood of the euro’s succeeding growth.

Technical Analysis of EUR/USD for October 27, 2020

Hot forecast and trading recommendations for EUR/USD on September 9

Overview of the GBP/USD pair. September 21. The UK will lose...

Trading plan for the EUR/USD pair on October 1

EURUSD remains inside the bullish channel

Trading plan for EUR/USD on January 13. The euro is starting...

Technical Analysis of ETH/USD for January 12, 2021

Dollar rebound may not be stopped

Trading plan for EUR/USD on January 13. The euro is starting...

Technical analysis of GBP/USD for January 11, 2021

Trading plan for EUR/USD on January 15

US stock market fluctuates due to coronavirus and upcoming US elections