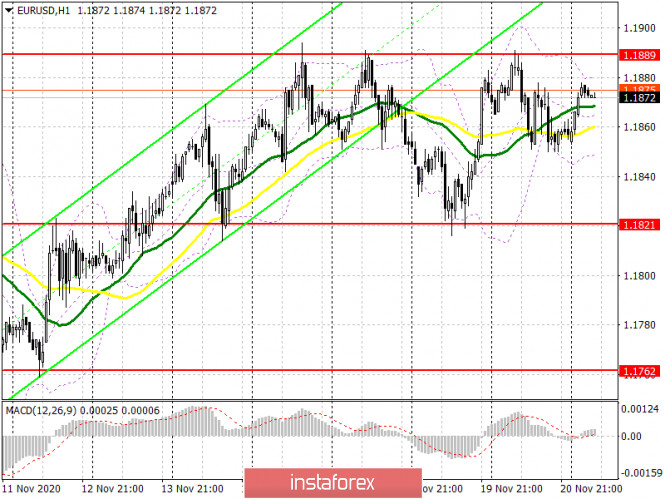 Like last Friday afternoon, it was not possible to wait for some kind of signal to enter the market, since trading was mainly carried out in the middle of the horizontal channel. Volatility remained fairly low due to the lack of important fundamentals and progress in negotiations between the UK and the EU.

Buyers will entirely be focused on the 1.1889 level, which appeared last Friday. A breakout and getting the pair to settle above this level forms a good signal to open long positions in order to continue the upward trend, which will be directed to new highs in the 1.1953 area, where I recommend taking profits. The next area will be the resistance of 1.2008, but it will be achievable only if there are more than good data on PMI indices for the eurozone countries, although I would not recommend counting on them. If the euro is under pressure in the first half of the day, and the service sector demonstrates a larger slowdown in November, then it is best to refuse buying, counting on the pair’s fall to the lower border of the 1.1821 horizontal channel. The initial test of this level will lead to an upward correction of 15-20 points within the day.

The bears are facing a new challenge to protect resistance at 1.1889. However, forming a false breakout at this level will be a signal to open short positions with the expectation of a decline to the lower border of the horizontal channel at 1.1821, where I recommend taking profits. This signal will be realized in case we receive weak PMI indices for the eurozone countries. In case of a breakout and consolidation scenario below 1.1821, one can expect the pair to fall to the support of 1.1762, which will form a new downward trend for the pair. If bears are not active at the 1.1889 level in the first half of the day, I recommend refusing to sell until the 1.1953 high has been updated, where you can open short positions immediately on a rebound, counting on a downward correction of 15-20 points within the day.

The Commitment of Traders (COT) report for November 10 showed a reduction in long and short positions. Euro bulls are holding on to a wait-and-see attitude and are in no hurry to return to the market even after the US presidential elections. Despite this, buyers of risky assets believe that the bull market will continue, although they prefer to proceed with caution. Thus, long non-commercial positions decreased from 208,237 to 202,374, while short non-commercial positions remained practically unchanged, falling from 67,888 to 67,087. The total non-commercial net position decreased to 135,287 against 140,349 a week earlier. It is worth noting that the delta has been declining for seven consecutive weeks, which confirms the buyers’ lack of desire to enter the market in the current conditions. Growth will only begin after Joe Biden’s victory and once his plan is implemented, as he intends to endow the American economy with the next largest monetary aid package worth more than $2 trillion.

Trading is carried out just above 30 and 50 moving averages, which indicates the likelihood of further growth in the euro.

The volatility is very low, which does not provide signals to enter the market.

Biden Administration Commits To Putting Harriet Tubman On The $20 Bill

Trading plan for the EUR/USD pair on December 28. Significant decline...