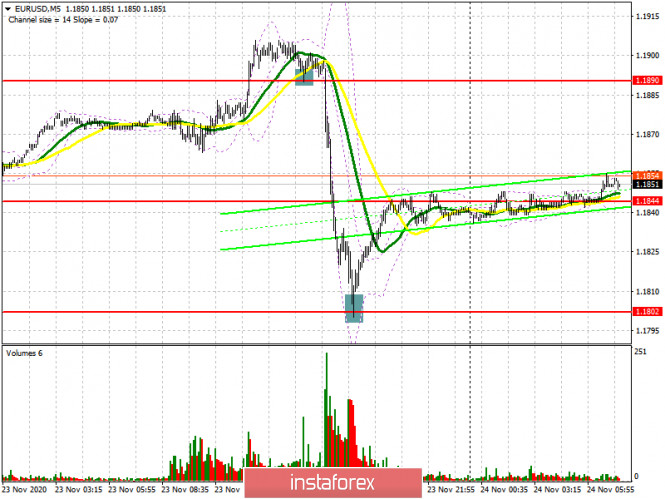 The 1.1890 level was tested from top to bottom yesterday and it formed an excellent entry point for long positions on the euro, but, unfortunately, this signal did not materialize. On the 5-minute chart, you can see how the bulls are testing the 1.1890 level from top to bottom, and then they also tried to sustain the pair’s growth, however, the data on the US economy played in favor of the dollar, which caused the euro to fall. And if you got losses on the first trade, then everything could be compensated for by buying on the rebound from a low of 1.1802. I also mentioned this deal in yesterday’s forecast.

But before talking about the pair’s prospects, let’s look at what happened in the futures market and how the Commitment of Traders (COT) positions changed. Last week kept the market in equilibrium, as we could observe a slight increase in both short and long positions. Vaccine news predominantly played on the side of risky asset buyers, while an increase in the number of coronavirus infections in Europe and weak fundamental reports did not allow bulls to leave the horizontal channel. The COT report for November 17 showed an increase in long and short positions. Despite this, buyers of risky assets believe that the bull market will continue since the delta is on their side. Long non-commercial positions rose from 202,374 to 203,551, while short non-commercial positions increased from 67,087 to 69,591. The total non-commercial net position fell from 135,287 to 133,960 a week earlier. Take note that the delta has been declining for eight consecutive weeks, which confirms the euro buyers’ reluctance to enter the market in the current conditions. We can talk about the euro’s recovery only when European leaders have settled differences with Poland and Hungary, and also when the UK negotiates a new trade deal with Brussels. Otherwise, you will have to wait until restrictive measures have been lifted, which were implemented due to the second wave of coronavirus in many EU countries.

Now for the technical picture. In order to keep the market on their side, euro buyers need to keep the pair above the 1.1844 level. Forming a false breakout on it in the first half of the day, together with good fundamental data on German GDP for the third quarter, produces a signal to open new long positions in hopes to return to yesterday’s high at 1.1890, where I recommend taking profit. We can talk about continuing the upward trend only after a breakout and when the pair settles above this level, and by testing it from top to bottom, similar to yesterday, which then forms a new entry point into long positions. In this case, buyers will then aim for a high of 1.1929. In case bulls are not active and the pair returns to the area under 1.1844, I recommend not to rush into buy positions, but to wait for a downward correction towards the area of yesterday’s support at 1.1802. You can open long positions from there only after forming a false breakout. I recommend buying EUR/USD immediately on a rebound but only from a low of 1.1749, counting on a correction of 15-20 points within the day.

In order for bears to bring back the downward trend, it is enough for them to go below the 1.1844 level. Getting the pair to settle below this and testing it from the bottom up produces an excellent signal to sell the euro, while aiming to fall to yesterday’s low towards the 1.1802 area, which is where I recommend taking profits. However, only a breakdown of this range can open a real road to the lower border of the wide horizontal channel to the 1.1749 area. In case the euro grows in the first half of the day when we receive good data on the German economy, it is best not to rush to sell, but wait until a false breakout forms in the resistance area of 1.1890. I recommend selling the euro immediately on a rebound but only from a high of 1.1929, counting on a downward correction of 15-20 points within the day. 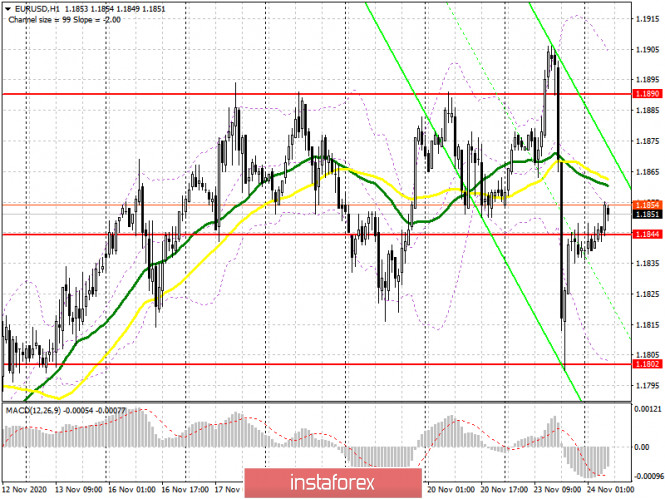 Trading is carried out below 30 and 50 moving averages, which indicates an attempt by the bears to take control of the market.

This Entrepreneur Is Working for Justice and Reform After Police Killed...

EUR/USD. The battlefield is the courtroom. US elections still set the...