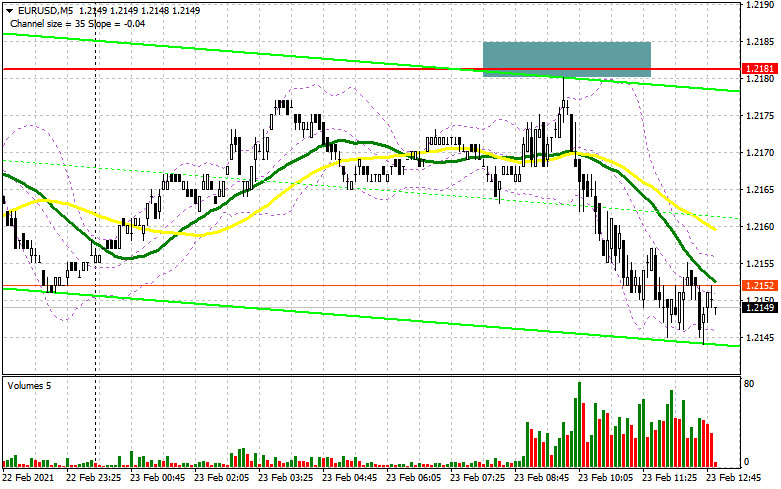 EUR/USD: plan for the US session on February 23 (analysis of morning trades)

To open long positions on EURUSD, you need to:

In the first half of the day, I paid attention to the resistance level of 1.2181 and expected to open short positions from it. Let’s look at the 5-minute chart and talk about what happened. Unfortunately, it was not possible to wait for the formation of a false breakout in the area of 1.2181, and therefore the euro’s downward movement was missed. The data on inflation in the eurozone did not impress traders, and they decided to retreat before Powell’s speech and not try their luck at monthly highs.

From a technical point of view, nothing has changed. I had to review the upcoming support and resistance levels, however, the tactics remained the same as in my morning forecast. Like I said before, the focus will be on the speech of Federal Reserve Chairman Jerome Powell, as well as on the data on the US consumer confidence indicator. Good data may increase the pressure on the euro, so buyers need to think about how to protect the support of 1.2133. The formation of a false breakout forms a good entry point into long positions with the expectation of continuing the upward trend. If there is no bull activity at this level, I recommend postponing long positions until the test of the minimum of 1.2093, from where you can buy the euro immediately for a rebound in the expectation of an upward correction of 20-25 points within the day. An equally important task for the bulls will be to return to the monthly maximum in the area of 1.2178. A test of this area from top to bottom forms an excellent signal to open long positions in the euro with the aim of further growth in the area of the maximum of 1.2220, where I recommend taking the profits. The longer-term task of the bulls will be to update the resistance at 1.2260.

I recommend opening short positions in the second half of the day against the upward trend only if a false breakout is formed in the resistance area of 1.2178, which forms a sell signal for the euro. However, only a return to the level of 1.2133 and its test from the bottom up will form a convenient point for entering the market in short positions to further reduce the EUR/USD. Good fundamental data and statements by Federal Reserve Chairman Jerome Powell may strengthen the position of the US dollar. The breakdown of 1.2133 will quickly dump EUR/USD in the support area of 1.2093, where I recommend taking the profits. The further trend direction of the pair depends on this level, so you need to act very carefully. A break in this range will lead to a reversal of the upward trend. If the demand for the euro returns in the second half of the day, and the bears do not show any activity in the resistance area of 1.2178, then it is best to postpone short positions until the test of a new high of 1.2220, from where you can sell EUR/USD immediately on a rebound to reduce by 20-25 points within the day. The next major resistance is seen around 1.2260. 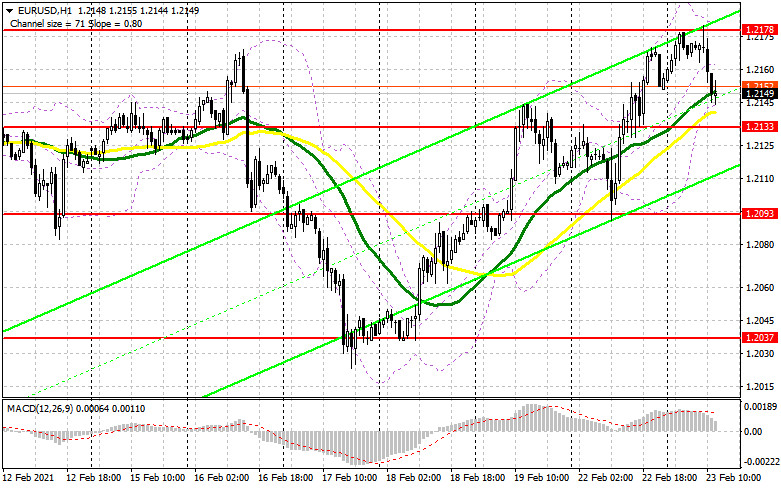 Let me remind you that in the COT report (Commitment of Traders) for February 16, there were no special changes in the positions of major players, which once again indicates the temporary equilibrium of the pair before a new wave of its growth in the spring of this year. Another major decline of the pair down last week was played out, and this once again confirms the theory that the US dollar continues to be less in demand among investors. Therefore, a more correct approach to the market should be to buy the European currency on the average market. A good plus for the euro will be the moment when the European countries begin to actively curtail quarantine and isolation measures, and the service sector will once again work in full force, which will lead to an improvement in economic prospects and also strengthen the EUR/USD pair. The COT report shows that long non-profit positions rose from 220,943 to 222,895, while short non-profit positions rose from 80,721 to 82,899. As a result, the total non-profit net position declined slightly after rising last week to 140,006 from 140,222. The weekly closing price was 1.2132 against 1.2052 a week earlier, indicating the presence of buyers in the market.

Trading is conducted around 30 and 50 daily moving averages, which indicates a pause in the market before important fundamental data.

Note: The period and prices of the moving averages are considered by the author on the hourly chart H1 and differ from the general definition of the classic daily moving averages on the daily chart D1.

EUR/USD: plan for the European session on January 29. COT report....

Oklahoma Man Admits to Killing Neighbor and Cooking Her Heart Before...

Republican Attorney in Florida Being Investigated for Allegedly Registering to Vote...

Technical Analysis of ETH/USD for February 24, 2021