The euro-dollar pair shows multidirectional dynamics today. The price returned to the 13th figure in the morning – primarily due to the general weakening of the US currency. But the roles changed in the afternoon: the bears seized the initiative and are now trying to get the pair back under the Tenkan-sen line (which currently corresponds to the 1.1260 mark). From a technical point of view, this is a strategically important price barrier: if the price consolidates on this target, the Ichimoku trend indicator on the daily chart will generate a bullish Parade of Lines signal that will allow buyers to test the next resistance level of 1.1400 and the main resistance level of 1.1420 (three-month high, coinciding with the upper line of the Bollinger Bands indicator on D1).

It is worth noting that the downward momentum of EUR/USD is only partly due to the strengthening of the dollar. The pair is mainly declining due to a sharp weakening of the euro across the market. The dollar itself still demonstrates vulnerability due to many factors that have accumulated throughout the week (increased risk sentiment, weak US macro reports, uncertainty about additional assistance to the US economy, etc.). But the European currency quite unexpectedly “fell under the hand”, although the trade conflict between the US and the EU has been smoldering for a long time.

Let me remind you that Washington voiced its complaints to Europeans back in April last year: according to the White House, some European countries (namely France, Italy, Spain and Germany) illegally subsidized the European aircraft manufacturing concern Airbus, causing the US state $11 billion in annual damage. The US then threatened to introduce additional duties on a number of goods from the above European countries.

A little later – in October last year – Brussels lost a dispute over subsidies for Airbus to the World Trade Organization. This fact was the next stage in the trade confrontation between the United States and the European Union. Washington expressed its readiness to introduce tariffs authorized by the WTO ($7.5 billion), while Brussels expressed a similar willingness to use mirror measures. The White House took advantage of its right on October 18: the United States introduced additional tariffs for the above amount relative to some goods imported from the European Union. The list of these products is quite large – in particular, civilian aircraft levied a 10% tariff, and food and alcoholic beverages (Scotch whiskey, French wine, sire, clothing, coffee) charged 25%. In addition, European pork, yoghurts, butter, olives and other European exports most in demand in the United States fell under new sanctions.

The EU did not remain in debt and asked the WTO to authorize the imposition of retaliatory duties in the amount of 11 billion 200 million dollars for American goods. Today it became known that the WTO will decide on trade return tariffs in July. According to most experts, if Brussels receives a green light in this matter and takes advantage of its right, then losses will be incurred not only by US aircraft manufacturers, but also coal producers, farmers, as well as representatives of the fishing industry. This will be a rather painful blow for Donald Trump, whose rating is already falling against the backdrop of the coronavirus epidemic, mass protests and the economic crisis. The above sectors of the economy are especially important for the head of the White House, since their representatives are concentrated mainly in the states that support the Republicans (in particular, the fishing sector is important for Louisiana, the coal mining industry for Missouri).

Given this disposition, some experts have suggested that the trade war between the US and the EU will continue, thereby exacerbating the situation of the global economy. For example, Trump could bring back the issue of introducing duties on European cars and spare parts. This “Damocles Sword” has been hanging over Europe for a long time, since 2018. Under attack is the automotive industry not only in Germany, but also in France and Italy – according to preliminary estimates, the total cost of the indicated duties is $300 billion. According to experts, in the case of the introduction of American duties, the domino effect will follow: the business climate in the eurozone countries will significantly deteriorate again, thereby slowing down the growth of key indicators and the economy as a whole. This question was put on a “long-playing pause” thanks to trade negotiations, but the White House can play this card at any time, especially against the backdrop of the upcoming presidential election. 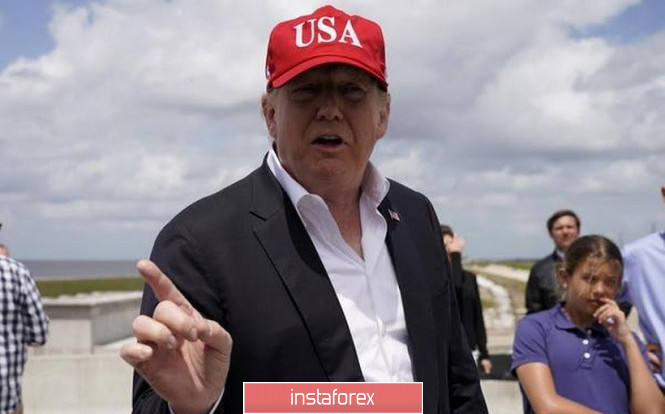 Such prospects greatly excited the market participants. Anti-risk sentiment increased again, providing background support to the dollar as a defensive asset. In turn, the European currency was under pressure – after all, if a trade war with Washington really becomes a reality, the process of economic recovery in the EU could be significantly delayed.

But here is the keyword “if.” Firstly, it is not a fact that the WTO will decide in favor of Brussels. Secondly, it is not a fact that Trump will continue to heat up the situation, because the attitude of the Americans towards the trade wars initiated by him is far from unambiguous. And thirdly, even if the WTO allows the European Union to introduce retaliatory duties, it is not a fact that it will use this right. It is likely that Europeans are using this decision as a powerful argument in repeated trade negotiations.

Therefore, in this case, the downward momentum is due to the factor of surprise, while it is too early to talk about the real threats of a trade war. If EUR/USD remains above 1.1260 by the end of the day, then you can consider the longs to the first resistance level of 1.1400 and the main resistance level of 1.1420 (a three-month high coinciding with the upper line of the Bollinger Bands indicator on D1) for the pair.

What is a sound bath? Here’s how to use this mediative...

Technical analysis of the EUR/USD pair for August 2020

5 Podcasts To Get You Smart on All Things Influencer Marketing

Disney Moves Live-Action ‘Mulan’ To Homes Instead Of The Big Screen...

Analysis and trading signals for beginners. How to trade the GBP/USD...

EURUSD: The European Commission’s report hit the euro positions, however, the...