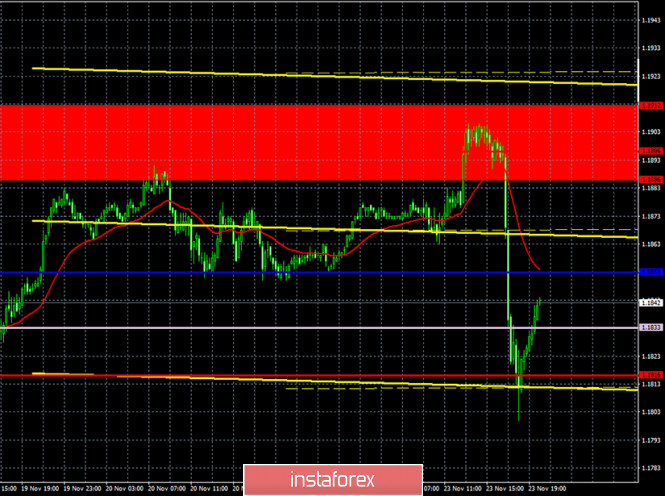 Forecast and trading signals for EUR/USD on November 24. COT report. Analysis of Monday. Recommendations for Tuesday

The EUR/USD pair tested the resistance area of 1.1884-1.1912 on the hourly timeframe on Monday, November 23, which is not only a resistance area, but also the area of the upper line of the horizontal channel at 1.1700-1.1900, which is where quotes have been in over three months. This time, testing the area was deeper than the previous three times, but the result was still the same. Rebounded, moved down, quotes fell. This is what we warned traders about last week. It will be very difficult for buyers to overcome the 1.1884-1.1912 area, because there are no special reasons for new buy positions on the euro. Therefore, exactly what was expected: another round of decline within the horizontal channel. Now we expect quotes to drop further (after a slight upward correction) to the lower channel line of 1.1700. The Ichimoku Kijun-sen and Senkou Span B lines in flat conditions (and it’s flat that remains in the mid-term plan) have no particular strength or importance and also do not provide any support or resistance to the price.

The 15-minute timeframe shows that both linear regression channels moved sideways because quotes sharply fell in the US session on Monday. The key is the rebound from the 1.1884-1.1912 area, which allows us to expect that quotes will drop further. So far, the support level of 1.1816 has kept the pair from falling again, but hardly for long. 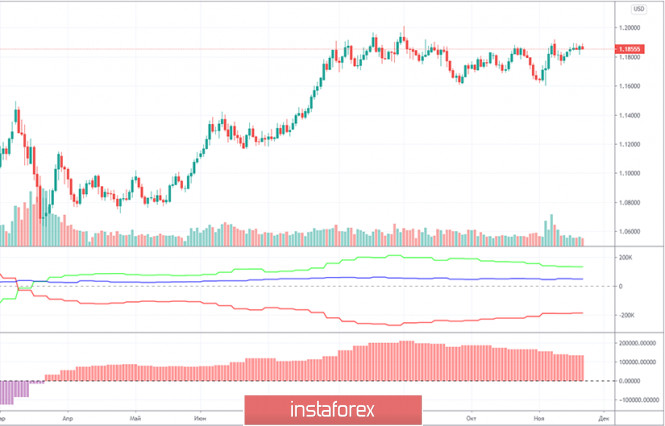 The EUR/USD pair increased by 40 points in the last reporting week (November 10-16). As you can see, price changes are still minimal. There were certain bursts of activity during the US presidential elections, but they ended very quickly and now the pair is just trading in a horizontal channel, with minimal volatility. Therefore, we expect clarification of the current situation from the Commitment of Traders (COT) reports. Unfortunately, COT reports for the last 8-10 weeks now show that non-commercial traders are reducing their net position. This means that their sentiment is becoming more bearish. The green and red lines of the first indicator show the net positions of commercial and non-commercial traders, and when they are far from each other, this is considered a strong signal for a trend change. However, the lines have moved away and they have been moving towards each other for two months now. There is no downward trend. The “non-commercial” group of traders, which is the most important and significant, opened 2,000 Buy-contracts (longs) and 1,500 Sell-contracts (shorts) for the euro during the reporting week. Therefore, there is simply no change in the mood of this group of traders. We are much less interested in other groups of traders. In general, we have a somewhat paradoxical situation, as professional traders have been reducing the number of purchases of the euro currency and increasing sales for more than two months, but the euro does not fall. Nevertheless, based on the data of the report, we still believe that the peak of the entire upward trend was near the 1.2000 level and sooner or later the downward movement will start.

Germany and the European Union published business activity indices in the services and manufacturing sectors, as well as composite indices. Business activity in the service sector has significantly decreased in both Germany and the EU, a particularly stronger fall in the bloc than in Germany alone. This, of course, is a bearish factor for the euro, but at that time the euro continued to rise, despite these reports. But the indexes of business activity in the services and manufacturing sectors of the US were published in the afternoon, which exceeded forecasts and could fuel the dollar to appreciate, especially against the background of such weak reports from the European Union. It should be understood that business activity in itself is not a strong indicator, but it warns of a possible economic contraction.

Germany will publish third-quarter GDP figures on Tuesday, November 24, as well as several secondary reports. Germany’s GDP is of interest to us only as an indicator of European GDP. However, this report is unlikely to have a strong impact on the euro rate. No more macroeconomic publications scheduled for today. However, one should not forget that the political chaos in America persists, although market participants are already fed up with it. But this does not mean that there will be no more news. As long as Donald Trump remains at the helm of the United States, news can appear at any time.

We have two trading ideas for November 24:

2) The bears seized the initiative within the same horizontal channel. However, they need time for the pair to correct upwards. Thus, to be able to open new sell orders with targets at the support levels of 1.1816 and 1.1775, the price must settle below the Senkou Span B line (1.1833). Take Profit in this case can be up to 50 points.

Forecast and trading signals for GBP/USD

LeBron James Graces Latest Wheaties Box With Students From His ‘I...

Trader’s Diary 13.11. What are the reasons for Euro-optimism

Biden Administration Commits To Putting Harriet Tubman On The $20 Bill