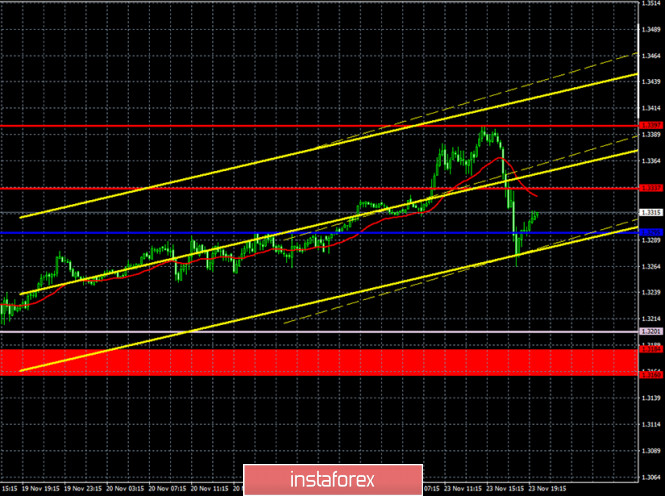 Forecast and trading signals for GBP/USD on November 24. COT report. Analysis of Monday. Recommendations for Tuesday

The GBP/USD pair continued to move up on Monday, November 23 and reached two resistance levels at once during the day. Perfectly reaching the second target provoked a rebound and a sharp drop in the British pound’s quotes. Approximately the same drop was recorded for the EUR/USD pair. However, the technical picture for the EUR/USD pair is quite simple and unambiguous. As for the GBP/USD pair, it is complex and ambiguous. The main problem is that now there is neither a clear trend line nor a trend channel to accurately determine the trend and have support for one or the other. The upward trend line was broken, but the price moved up. This is confusing. Also, quotes sharply fell yesterday afternoon, so now we cannot say that this is definitely a correction, but the upward trend is still present.

Both linear regression channels are directed to the upside on the 15-minute timeframe, so there are no signs of ending the upward trend at this time, despite the downward retreat from yesterday. The bulls seem to have made a serious step towards continuing the upward trend, breaking the 1.3300 level, but yesterday’s fall calls the strength of the bulls into question. 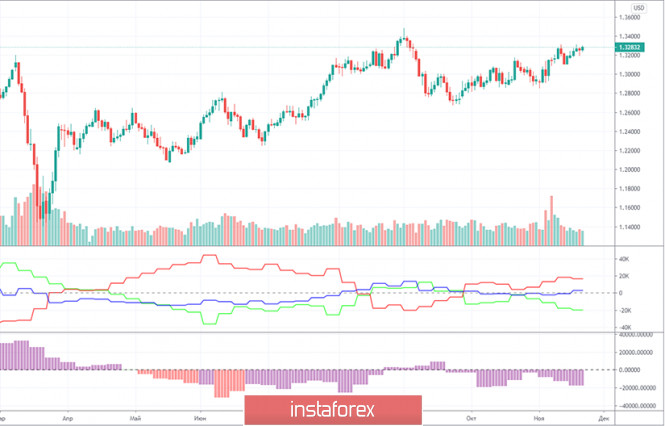 The GBP/USD pair rose by 25 points in the last reporting week (November 10-16), although the volatility was quite high during this time period. However, the Commitment of Traders (COT) report has not provided us with any important information that could help in forecasting and trading for several weeks now. Recall that the red and green lines must move away from each other or sharply change the direction of their movement, so that we can conclude that one trend ends and another begins. In recent months, both lines regularly change their direction, which indicates the absence of signals based on COT reports. What can we say about the most important group of non-commercial traders? This group opened 533 contracts to buy the pound and 616 contracts to sell during the reporting week. Therefore, it doesn’t even make any special sense to calculate the change in the net position or the amount by which the attitude of professional traders has changed. A little more than 1000 contracts per week is very little. Therefore, in essence, there are no changes. What do we end up with? There are no changes, and the general picture of things does not make it possible to predict any definite development of the situation. So now it is better to pay more attention to technique and foundation.

The fundamentals for the British pound were meager on Monday. The UK services PMI fell, which is not surprising at all, but it declined less than analysts expected. The dollar could rise in the afternoon due to the fact that US business activity increased. But we received news on the most significant topic for the pound. Yesterday it became known that negotiations on the Brexit trade deal will resume online. In addition, the chief negotiator from the EU, Michel Barnier, said that serious differences remain between the parties on key issues, but both London and Brussels are still trying to come to a common solution. “Time is short. Fundamental differences remain, but we continue to work hard on the agreement, “Barnier said. In fact, this is sarcasm. The point is that nothing has changed. Prime Minister Boris Johnson sets deadlines, both parties continue to say that there is very little time and “we may not be in time” and well, the negotiations just continue. Therefore, we once again recommend traders to wait for the official information and work it out, and not the next portions of rumors and expectations.

No macroeconomic reports set for release in the European Union and the United States. However, the British pound cannot feel secure as negotiations for a trade deal continue. The question stands: how long will markets be ready to buy the pound, based on simple hopes that this deal will eventually be concluded? After all, there are still no good reasons for buying the pound. There are no positive statements by Barnier or Frost. Simply that “negotiations continue,” “talks resume” and “serious differences remain on a number of key issues.” We heard it a week ago, and a month ago, and three months ago. We still believe that the pound is much more likely to start falling.

We have two trading ideas for November 24:

1) Buyers for the pound/dollar pair continue to hold the initiative in their hands and did not let the price go below the Kijun-sen line (1.3295). Thus, we advise you to trade upwards while aiming for the resistance levels of 1.3337 and 1.3397, if buyers remain above the critical line. Take Profit in this case will be up to 80 points.

2) Sellers failed to go below the critical line today. If the price settles below the Kijun-sen line (1.3295), you can sell the pound/dollar pair while aiming for the Senkou Span B line (1.3201). Take Profit in this case can be up to 80 points.

EUR/USD: the dollar is in no hurry to continue its decline...

Technical analysis of EUR/USD for November 02, 2020

Technical Analysis of GBP/USD for September 30, 2020

Gold is steadily declining, but experts believe it will return to...