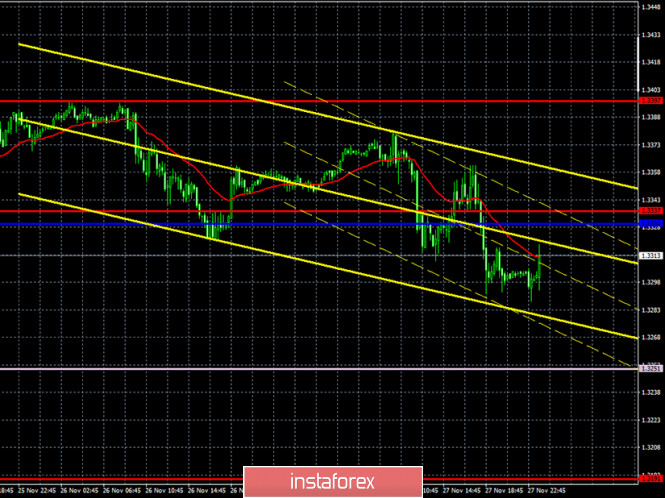 Forecast and trading signals for GBP/USD on November 30. COT report. Analysis of Friday. Recommendations for Monday

The GBP/USD pair started a round of downward movement on Friday, November 27, within which it left the rising channel. However, this is not the first change in trend in recent years. Previously, the pair has settled below the rising trend lines three times, afterwards the upward movement resumed anyway. Thus, buyers still held it in their hands despite the fact that most of the factors currently speak for the pound/dollar pair’s fall. At the moment, the quotes have gone below the critical line, so we can expect a succeeding downward movement towards the Senkou Span B. An additional factor that speaks in favor of the dollar’s growth is a double rebound from the 1.3397 level. In general, there are a huge number of factors in favor of the dollar, and not a single one in favor of the pound. Also, the fact that the pound is overbought should be added to this.

Both linear regression channels are directed to the downside on the 15-minute timeframe, which is absolutely logical after the price failed to overcome the 1.3397 level. In the near future, we expect quotes to fall to the Senkou Span B line, near which the pair’s succeeding fate for the next few days will be decided. 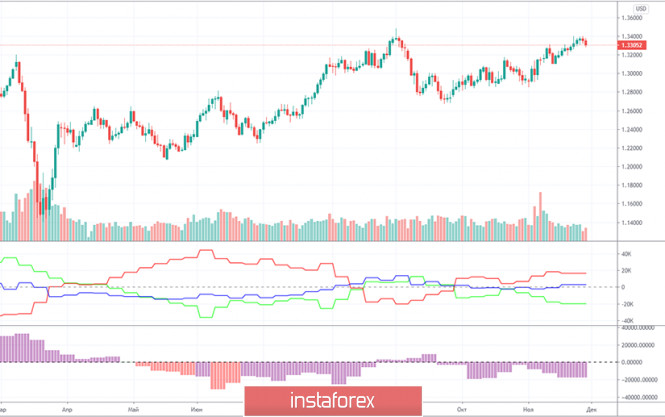 The GBP/USD pair rose by 135 points in the last reporting week (November 17-23), so we could expect an increase in the bullish mood of professional traders in the Commitment of Traders (COT) report for this period. We mentioned that changes were minimal when analyzing the report on the euro currency. However, they are not minimal in the pound’s case, they simply do not exist. The most important group of non-commercial traders opened 533 Buy-contracts (longs) and 616 Sell-contracts (shorts) during the reporting week. That is, the net position for this group of traders fell by less than 100 contracts. The total number of open contracts is about 90,000. Consequently, the conclusion suggests that professional traders were resting during the reporting week. In principle, both indicators show the same thing. The first one has changed direction very often in recent months (the green and red lines are constantly unfolding), which indicates that there is no definite trend and clear mood among professional players. The second shows the same lack of trend in the mood of non-commercial traders. Thus, all the data from the COT report say only one thing: we can not make predictions, since there are very few changes.

The fundamental backdrop for the pound remains upbeat. While the United States is moving away from several months of hassle associated with the elections, the UK and EU continue negotiations on a trade deal, the essence of which has not changed in recent months. All the same “serious disagreements remain between the parties”, all the same “three issues remain unresolved”, still London and Brussels blame each other and say that the deal depends on the opposite side. Traders have long believed that the deal would still be closed and that the British economy would not be knocked out in 2021. But faith alone will not go far. Sooner or later, optimism goes away and it seems that now traders are no longer ready to blindly buy the pound. As for other news and messages, now they do not matter at all. Markets cheerfully ignore the official, not too biased information about the course of the negotiations, so statistics and news regarding the coronavirus are of no interest to them at all.

No important reports or events from the European Union and America on Monday. Market participants will monitor any news related to negotiations on a trade deal. True, talks have just resumed and it is unlikely that we will receive new information right away on Monday. And given the ability of both sides to give in and negotiate, we may not get new information very soon. We have said more than once that if we take the entire fundamental background into account, then the pound has no reason to rise in price against the dollar. Thus, we are still leaning towards the pound’s fall.

We have two trading ideas for November 30:

1) Buyers for the pound/dollar pair released the initiative and missed quotes below the Kijun-sen line (1.3330) and below the rising channel. Thus, we advise you to tradeupward while aiming for the resistance level of 1.3483 not earlier than a rebound from the Senkou Span B line or when the pair settles above the 1.3397 level. Take Profit in this case will be up to 70 points.

2) Sellers still managed to get the pair to settle below the rising channel, so they can finally move from words to deeds. We recommend selling the pair at this time with targets on the Senkou Span B line (1.3251) and the support level of 1.3191. Take Profit in this case can range from 60 to 120 points.

US elections threaten many assets

Using Inclusion to Drive Innovation and Collaboration in Global Health

Technical analysis of Ethereum for May 4, 2021

Should I Count on Social Security in Retirement?

“Crazy diapers” are incomprehensible to regulators