GBP/USD analysis on November 25. The subject of lengthy negotiations between the European Union and the UK is the trade

In the most global terms, the construction of the upward trend section continues but the wave marking takes a complex form and may become even more complicated. The section of the trend that started on September 23 took a five-wave form but not an impulse one. A successful attempt to break the previous peak indicates that the markets are ready for further purchases of the British pound. The supposed e-wave also took a five-wave form. 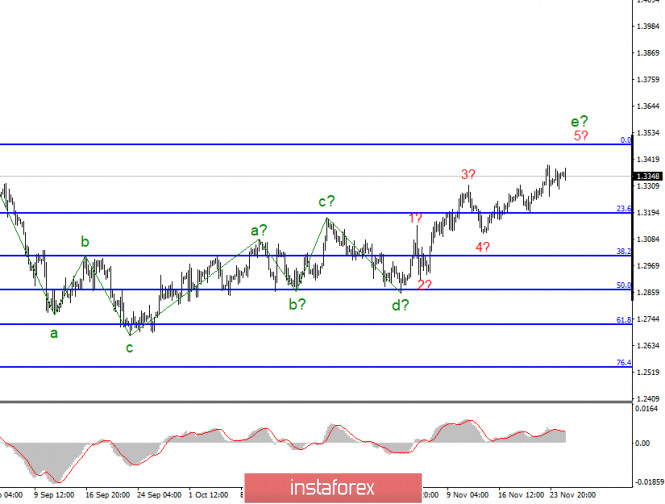 The lower chart clearly shows the a-b-c-d-e waves of the uptrend section. The assumed e-wave took a more complex five-wave form. However, even with this complication, it is nearing completion. At the same time, the demand for the British remains quite high. This means that the upward section of the trend can be complicated almost indefinitely. I am still inclined to the option of a fall in the instrument’s quotes.

Trade negotiations between the EU and the UK are continuing and that says it all. I have repeatedly said that there has been no important news on this topic for the past weeks. All other messages that come to the market do not deserve special attention at all. Today I propose to find out why a trade deal is so important for both the EU and Britain. The answer is really simple and short: $ 900 billion in trade. At this time, Britain and the EU continue to trade without any duties, so the trade turnover has not been affected. However, it will suffer very much from January 1, 2021 if London and Brussels will fail to conclude an agreement. By comparison, the UK signed a $ 1.5 billion free trade agreement with Japan and $ 27 billion with Canada in 2020. The agreement with the EU is worth 900 billion and that is what’s at stake. This is understood by almost everyone and this agreement is more important for Britain than for the European Union.

The UK business sector is calling on Boris Johnson to conclude an agreement with the EU, saying that business is depleted by the coronavirus pandemic. Without a deal, most of the business will be forced to reduce its production and for some it will be a critical moment and will have to close. Therefore, the prospects for the British economy are absolutely black now. The end of the transition period is just over a month away. And the parties still need to ratify the agreement in Parliaments. In General, everything is going so far to the fact that the parties simply do not have enough time.

Today, America will release important reports on GDP, orders for durable goods, as well as on personal income and expenses. I’m suggesting paying attention to these figures because they can trigger a market reaction if the actual values do not match expectations.

The Pound-Dollar instrument has resumed building an uptrend but its last wave is nearing completion. Thus, now I recommend that you look closely at the sales of the instrument but the British is not yet giving clear signals about the end of the upward section of the trend. At the same time, purchases of the instrument are now quite dangerous, given the uncertainty associated with the trade deal.

What’s in My Mailbox | A swipeable lift note to repurpose...

Bucket List: Top 15 Best Things to Do in Hamilton, New...

EUR/USD: plan for the European session on September 30. COT reports....

Technical analysis of AUD/USD for December 29, 2020

EUR/USD. Politics will soon take a back seat: focus on US...

Technical Analysis of BTC/USD for January 15, 2021

Technical Analysis of ETH/USD for November 9, 2020

Technical Analysis of BTC/USD for October 13, 2020