Hello, traders! According to the hourly chart, the pound/dollar pair performed a consolidation over the downward trend corridor, so the current mood of traders changed to “bullish”. The growth process may continue in the near future, however, I doubt that it has any information background. The problem is that the UK continues to receive a stream of mostly negative news. The country’s Prime Minister, Boris Johnson, is trying his best to instill optimism in the markets, however, he is not doing it well. There are no real and concrete actions from his government that could have a beneficial impact on the economy. However, all is not well in America now, and the problems are similar. Yesterday’s Fed minutes provided no new food for thought. The US authorities are trying to agree on a new package of assistance to the economy, but if the virus does not stop spreading, it may not be the last package. So the pound has been rising in recent days, however, I don’t believe this currency has a long-term basis for growth. 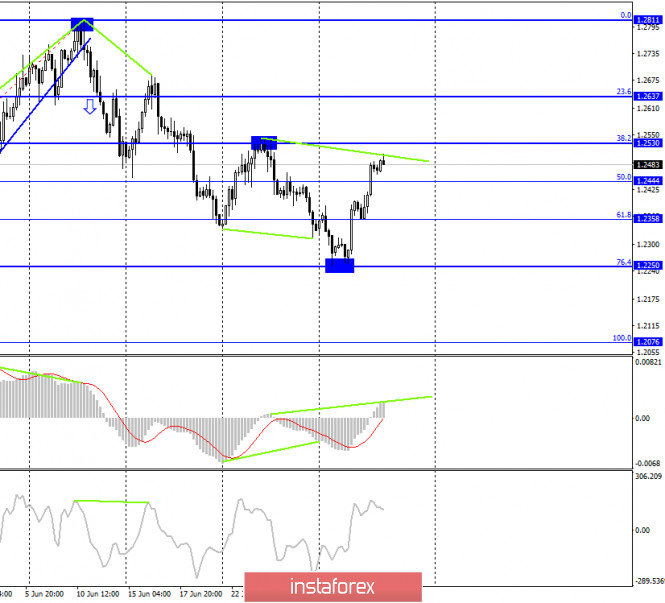 On the weekly chart, the pound/dollar pair performed a false breakdown of the lower trend line and rebound from it. Thus, until the pair’s quotes are fixed under this line, there is a high probability of growth in the direction of two downward trend lines.

News calendar for the US and UK:

US – change in the number of people employed in the non-agricultural sector (12:30 GMT).

US – number of initial applications for unemployment benefits (12:30 GMT).

On July 2, the most interesting events and reports are back in America. The most important of which is the Nonfarm Payrolls. If it is weak, the British dollar may continue to strengthen against the dollar today. 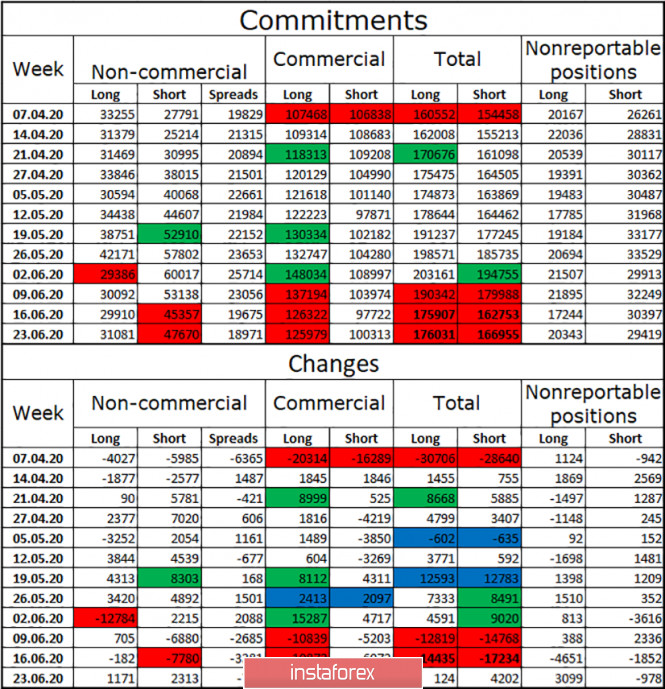 The latest COT report for the British pound was even less interesting than the euro report. Major market players trading the British pound were even less active during the reporting week. In total, the Non-commercial group opened only 3,500 new contracts. A more or less normal value is the number of 10,000 or more contracts. Thus, globally, the mood of major market players has not changed at all. In the last 10 days, as in the case of the euro, the British pound first fell, then rose, then fell again. The Non-commercial group was even less active, opening 2,500 new short contracts and closing 343 long ones. Well, the general changes for all groups of traders are completely depressing. Thus, the overall conclusion is disappointing. No special changes in the mood of major market players during the reporting week can be noted.

Forecast for GBP/USD and recommendations to traders:

I recommend selling the pound today with the goals of 1.2444 and 1.2358, if the closing rebound from the Fibo level of 38.2% (1.2530) is performed, especially in combination with bearish divergence. New purchases of the pair can be considered with the goal of 1.2637, if the pair performs a consolidation above the level of 1.2530.

GOLD Accumulation or Distribution Above $1,800?

Transform Yourself Into An Anime ‘Waifu’ With This Quick Online AI...

Filming Women In Public Without Their Consent Is Not A Crime,...

This Woman Created An App Aimed To Help Entrepreneurs Impacted By...

EUR/USD Sending Signs Of A Peak!

Missourians to Vote on Medicaid Expansion as Crisis Leaves Millions Without...