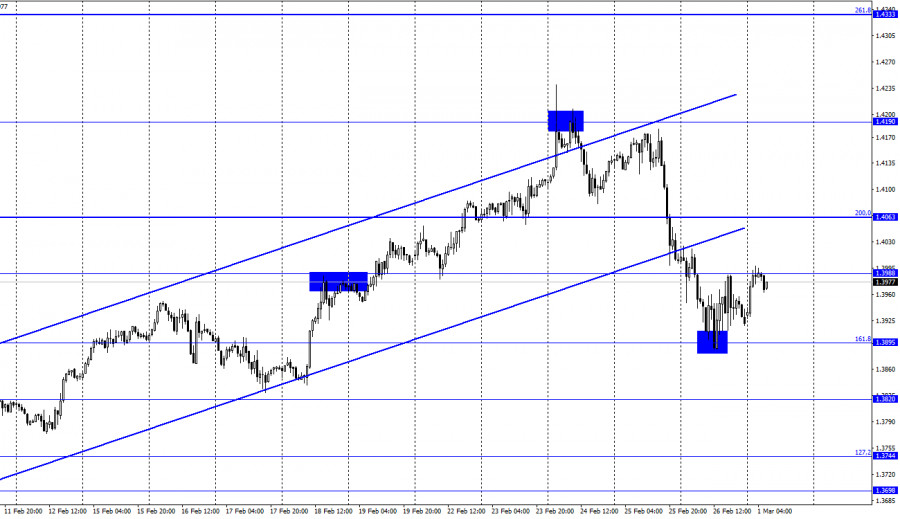 GBP/USD. March 1. COT report. How will traders react to the Congressional approval of the "bailout plan"?
">

According to the hourly chart, the quotes of the GBP/USD pair performed a fall to the corrective level of 161.8% (1.3895), a rebound from it, and an increase to the level of 1.3988. Thus, the rebound of quotes from this level will allow traders to count on a reversal in favor of the US dollar and a resumption of the fall in the direction of the level of 1.3895. Closing the pair’s rate above the level of 1.3988 will work in favor of continuing the growth of the British dollar in the direction of the Fibo level of 200.0% (1.4063). The calendar of UK economic events on Friday was empty. In America, there were only a few minor reports, however, there were a lot of other events in the last few days. I have already written about the fact that the yield of ten-year Treasury bonds is growing, and geopolitical tensions in the Middle East are also growing. Thus, these factors increase the demand for the US dollar. It should also be noted that on Saturday, the lower house of the US Congress voted in favor of Joe Biden’s bill to provide the US economy with assistance for another $ 1.9 trillion. Now the Senate must vote for this bill, in which the vote split between Republicans and Democrats is 50/50. However, the decisive vote belongs to Kamala Harris, who belongs to the democratic wing of the government. Thus, there is no doubt that almost $ 2 trillion more will be allocated to US businesses and households. This factor, from my point of view, can lower the dollar exchange rate. And in general, we have a fairly large number of factors that can somehow influence the dollar. In the near future, trading may be very turbulent. 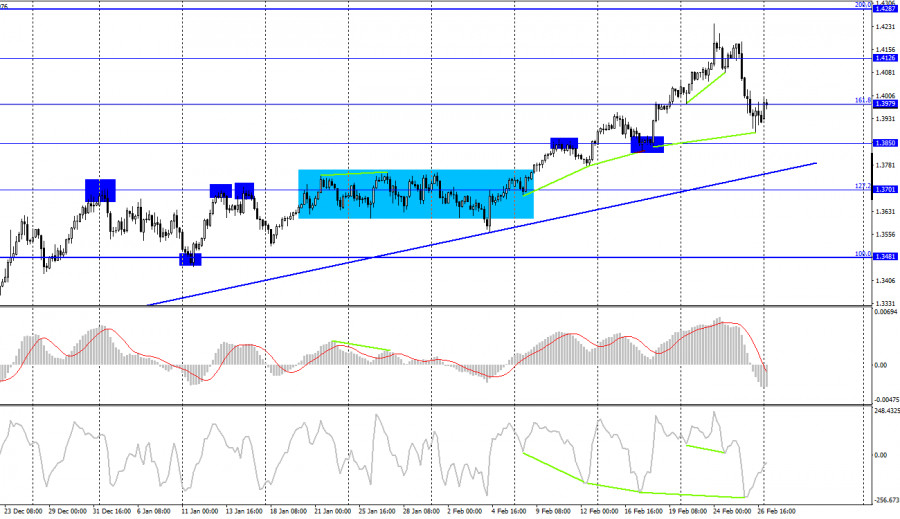 On the 4-hour chart, the GBP/USD pair performed a certain fall, but the resulting bullish divergence in the CCI indicator allows traders to count on a reversal in favor of the British dollar and a resumption of growth in the direction of the level of 1.4126. This divergence is against the main movement, so the growth may be extremely small. The upward trend line still characterizes the current mood of traders as “bullish”. 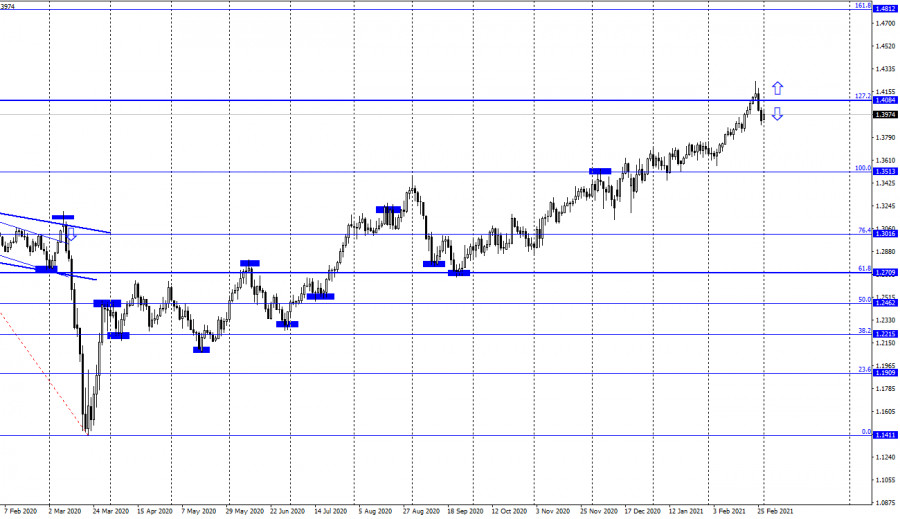 On the daily chart, the pair’s quotes closed under the Fibo level of 127.2% (1.4084), which now allows us to count on a slight drop in quotes, but more important now are the data from the hourly and 4-hour charts. 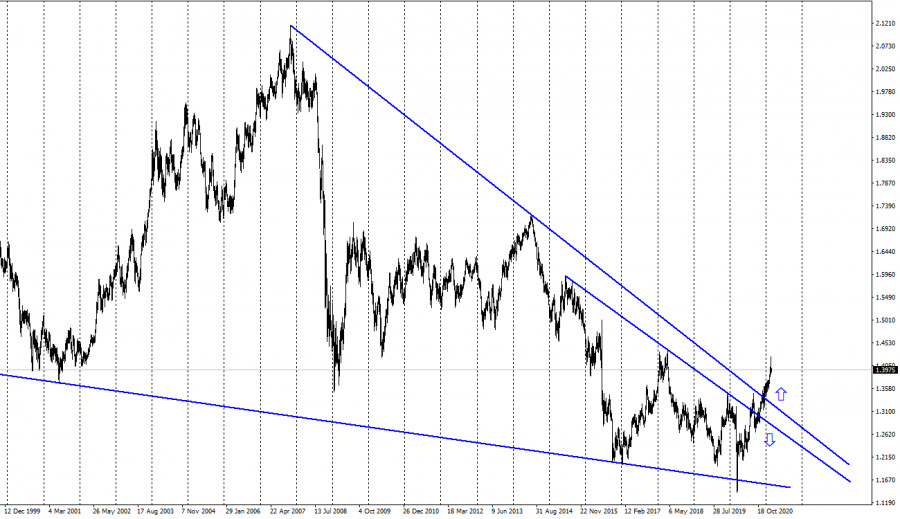 On the weekly chart, the pound/dollar pair completed a close over the second downward trend line. Thus, the chances of long-term growth of the pound are significantly increased.

On Friday, the UK calendar was completely blank, and statistics from the US were not the most important. Other more important factors affected the pair and the mood of traders much more strongly.

US – index of business activity in the manufacturing sector (14:45 GMT).

On March 1, the UK and the US will release indices of business activity in the areas of production, but it seems that more attention will be focused on geopolitical issues, data on the yield of treasuries, and the bill of Joe Biden. 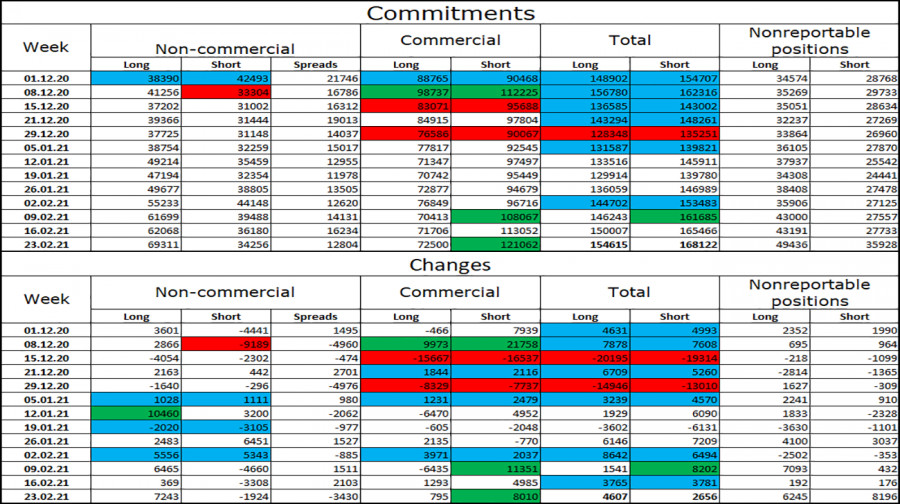 The latest COT report from February 23 on the British pound was extremely eloquent. During the last reporting week, speculators opened 7243 new long contracts and closed almost 2 thousand short contracts. Thus, their mood has become sharply more “bullish”, which fully coincides with what is happening in the market for the pound/dollar pair. Only in the following days (which were not included in the report) did the fall of the British pound begin, so the next COT report will be of interest. So far, the overall picture remains in favor of the British, as the category of “Non-commercial” traders continues to increase long contracts.

Forecast for GBP/USD and recommendations for traders:

It is recommended to buy the British dollar on Monday in case of closing above the level of 1.3988 on the hourly chart with a target of 1.4063. It was recommended to sell the pound sterling when the quotes were fixed under the upward trend corridor on the hourly chart with the targets of 1.3895 and 1.3820. The first goal is achieved. New sales – when rebounding from the level of 1.3988 with targets of 1.3895 and 1.3820.

Areas With The Worst COVID-19 Cases Overwhelmingly Voted for Trump

Feud Between Trump and McConnell Threatens GOP Hopes For 2022 Elections

What are the prospects for the long-term growth of the BTC/USD...

Hot forecast and trading signals for EUR/USD on September 16. COT...

Oil prices rose again due to rebel attack in the Persian...

Dogecoin has surged more than 950% since the start of the...